The year 2022 in Jewish philanthropy

From antisemitism to Ukraine to impact investing, here's what defined this year for the Jewish philanthropic world. 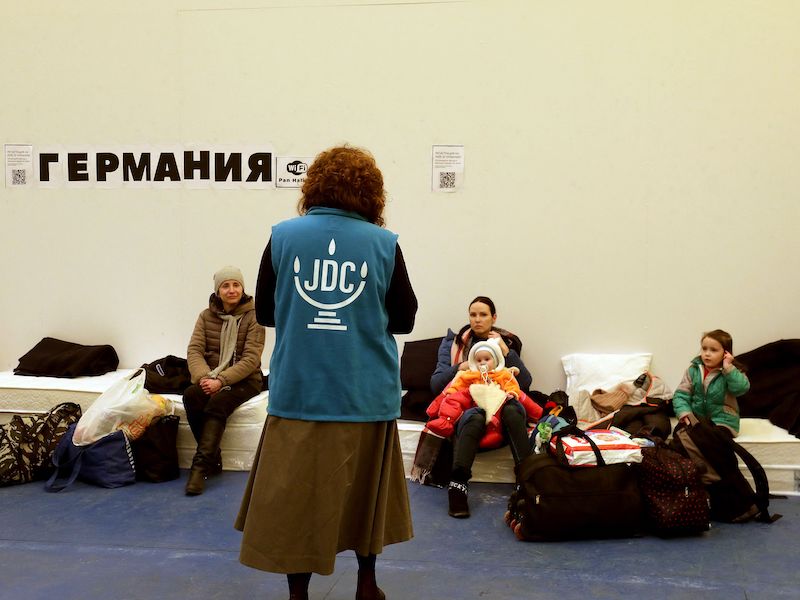 A JDC staffer helps Ukrainian Jewish refugees in Chisinau, Moldova on March 15, 2022, before they head to the airport to board a plane to Israel.

It has been quite a year for Jews — and for Jewish philanthropy. Two weeks into 2022, a gunman took a rabbi and three congregants hostage at Temple Beth Israel in Colleyville, Texas — prompting a renewed emphasis on funding to combat antisemitism. Just over a month later, Russia invaded Ukraine — sparking a transformation in American Jewish organizational budgets and priorities. The rest of the year was no less momentous — from major philanthropic news about Birthright to new efforts for reproductive rights to, recently, the allegations against Sam Bankman-Fried.

Throughout it all, Jewish funders and organizations placed an emphasis on mental health as the world emerged from COVID-19 restrictions, and found new online tools and platforms to help them give more effectively.

As we head into 2023, here are 10 trends and topics that defined the Jewish philanthropic world this year:

This year, the Jewish community got a series of reminders that hatred of Jews is alive and present. After the Colleyville hostage situation, the synagogue’s rabbi, Charlie Cytron-Walker, credited security training for helping him and his fellow victims get out unharmed. Soon afterward, the Jewish Federations of North America accelerated a program that would inject up to $126 million over three years into security. Jewish groups began a full-court press that led to the government providing $305 million for securing religious institutions and other nonprofits, though that number was short of the $360 million the groups requested.

An Anti-Defamation League audit found that 2021 had a record number of antisemitic incidents, and the hate continued, including a white supremacist shooting in Buffalo in April. Antisemitism on campus remained concerning, especially as eJP found that the federal Education Department had delayed regulations on the issue for years. Later, a coalition of nine groups at The University of California, Berkeley Law School agreed to bar events with Zionist speakers. As Hillel celebrates its centennial, keeping students safe has become a major priority.

Late in the year, antisemitism again dominated the headlines — this time accelerated by Kanye West, known as Ye. A campaign from Jewish groups persuaded Adidas to drop its $2 billion partnership with Ye, and soon afterward a White House summit on antisemitism led to the Biden administration announcing an inter-agency group to fight antisemitism and other forms of hate.

As inflation climbed in 2022, Jewish nonprofits and funders tried to remain optimistic. Still, rising costs impacted institutions across the Jewish world. Camp tuition is slated to jump 6% to 8% this year to cover the gap. During the High Holiday season, synagogues reconsidered their membership dues, budgets and financial models. Some JCCs, already hammered by the lockdowns of the pandemic, reframed their value — downplaying membership fees and emphasizing that donations are an investment in the community. Cost of living has also risen in Israel — and led to a short-lived resuscitation of the tent protests on Tel Aviv’s Rothschild Boulevard.

And Jews weren’t alone, of course. According to the 2022 Giving USA survey, the definitive survey of American philanthropy, donors in the U.S. gave $485 billion in 2021 — a 4% increase over the 2020 total. But due to inflation, it was effectively the same amount.

If much of 2020 and 2021 felt utterly dominated by COVID-19 and its effects on society, 2022 was the year when Jewish organizations figured out if and how the world was emerging from the pandemic era — deciding what to keep, what to jettison and how it has transformed the community. Even as the masks (mostly) gradually came off and more and more conferences and galas crowded rooms at marquee hotels, some vestiges of COVID remained. JW3, London’s Jewish community center, is still running its food bank. The Harold Grinspoon Foundation has made its emergency camp funding a long-term initiative. Online schooling, for some, has found an enduring appeal. Some conferences are still remote. And this past summer, for camps, COVID was still here.

One piece of COVID’s legacy has been an increasing emphasis on mental health. Dozens of camps received $32,000 in funding to hire mental health professionals. JFNA and the Network of Jewish Human Service Agencies launched a $2.75 million initiative for teen mental health, and in Los Angeles, Jewish Big Brothers and Big Sisters expanded its teen-staffed mental health call center. A growing number of groups invested in mindfulness programming. And some funders offered hundreds of thousands of dollars, collectively, to help Jewish professionals take time for themselves.

Aiding Ukraine — and immigration to Israel

Arguably the biggest disruption to Jewish philanthropy came on Feb. 24, when Russian troops invaded Ukraine. Jewish organizations that had invested in the country for decades — and that had centuries of lineage there — were well-positioned to help, and during the 10 months since, Jewish organizations have collectively sent hundreds of millions of dollars of aid to the country. Hillels in Ukraine were hit hard, and at least one Hillel student was killed in battle.

Tens of thousands of Ukrainian and Russian Jews fled their homes and, in many cases, streamed into Israel, and Israeli entrepreneurs tried to leverage their expertise to help refugees and provide aid. Russia threatened the operations of the Jewish Agency for Israel in court. The legal battle is ongoing.

The donations began as emergency funding, but have become a long-term priority for federations, aid groups and synagogues — at least one of which organized a mission to the border. Leadership delegations that visited refugees in Poland and elsewhere gave donors a firsthand look at the crisis and, groups said, drove more donations. But some aid workers said tour groups at times hindered the work they were there to witness.

Meanwhile, extensive sanctions from the U.S., the U.K. and the European Union hit a series of billionaires with ties to Russian President Vladimir Putin — including several leading donors to Jewish causes. That included three founders of the Genesis Philanthropy Group, who resigned from its board under sanctions, and other public figures.

This year saw an increase of specialized giving platforms, which mobilized technology to help donors large and small give more intentionally, meaningfully, personally and with less effort. Efforts like MyTzedakah, aimed at Gen Z and millennials, aimed to make it easier to engage younger donors, and micro-fundraising campaigns on Instagram amplified calls for donations to communities in crisis.

SparkIL provided the structure for microlenders to make loans of as little as $25 to support small businesses in Israel. On the other end of the spectrum, Giving Group Community, designed for donors ready to commit $100,000 or more, concentrated on pairing philanthropists with causes that matched their interests. The Israeli tech community, which does not have a history of large giving, saw a new organization, 1point8, boost engagement in philanthropy. These efforts were joined by Daffy, a donor-advised fund (DAF), which allows large and small donors to park their charitable giving in an account and more easily donate to a range of nonprofits. A Haredi entrepreneur created two new tools to facilitate small donations in his community. And Hatch, Ethos Tracking and Impala tripled down on using data, in an effort to provide organizations and individuals with more information about potential donors.

This year saw a new emphasis, in the Jewish community and elsewhere, on doing good through investment, not just charity. The ADL acquired the leading Jewish impact investing group, JLens, to have a direct connection to boardrooms in order to fight antisemitism in the corporate world. JLens this year accused General Mills of boycotting Israel by pulling Pillsbury from the country’s shelves (the company said it was a business decision) and was part of a coalition of groups that came to an agreement with the financial firm Morningstar in which it committed to rejecting the boycott movement.

Other news we paid attention to this year:

Other issues held the attention of the Jewish philanthropic world throughout 2022. A broad coalition including many of the largest Jewish organizations made unprecedented commitments to combating climate change and reducing their emissions, even as some still had varying levels of investment in fossil fuels. After the Supreme Court overturned Roe v. Wade, Jewish organizations and federations in states with abortion bans responded in varying ways, while some organizations pledged to fund out-of-state travel for employees or their dependents seeking reproductive care. Later in the year, Birthright issued a public call for small donations after a sharp reduction in giving from the Adelson family. And, finally, the arrest of Sam Bankman-Fried and the collapse of his cryptocurrency exchange, FTX, has led to increasing scrutiny of the movement he championed, effective altruism — and to a loss of funding loss for at least one EA group in Israel.