At JFNA GA, attendees confront division amid calls for unity

On a range of issues, from Jewish continuity to questions surrounding diversity and inclusion, the conference highlighted enduring divisions in the Jewish community. 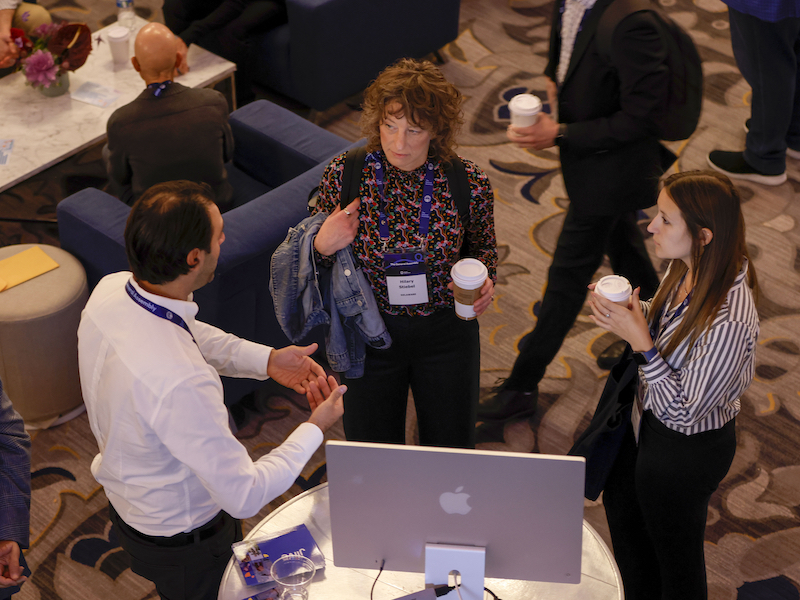 CHICAGO — Much of the discussion at the Jewish Federations of North America General Assembly, in the words of its leadership, was about the “oy” rather than the joy of Jewish life: Two of the conference’s three areas of focus were antisemitism and securing communal institutions, and aiding the humanitarian crisis in Ukraine.

The third priority of the conference was engendering Jewish communal unity — and that mission felt most successful when people were discussing the gathering’s first two priorities. Across panels and sessions at the three-day conference here, speakers and attendees voiced concern about antisemitism and expressed an urgent need to combat it. Aid to Ukraine was also a consensus topic.

But on a range of other issues, from Jewish continuity to questions surrounding diversity and inclusion, the conference highlighted enduring divisions in the Jewish community. A panel meant to emphasize the importance of civil discourse, in particular, featured an exchange that some LGBTQ attendees found offensive.

“The greatest threat to the Jewish community is internal,” Eric Goldstein, CEO of the UJA-Federation of New York, said at Monday’s plenary session, ahead of the civil discourse panel. “Mirroring society at large, we’ve become incredibly polarized… This demonization within our own community significantly weakens our ability to address external challenges. In short, we’re our own worst enemy.”

Some of the divisions were baked into the schedule of the conference, which brought some 1,200 attendees to the Hilton in downtown Chicago from Sunday through Tuesday. Sessions prompted panelists to discuss communal divisions across religious denominations, generations and income levels.

“As we’ve emphasized… all of us can work on these common sets of agendas,” JFNA CEO Eric Fingerhut told a small group of reporters on Tuesday. “You don’t get there by papering over disagreements. You get there by acknowledging that there are areas we disagree and then finding ways that we work together.”

But a panel that was meant to explore how the Jewish community could have conversations across a broad ideological spectrum has sparked backlash. The plenary discussion on Monday morning, titled “Viewpoint Diversity,” was moderated by Rabbi David Wolpe, the outgoing leader of Los Angeles’ Sinai Temple.

At the panel, Wolpe repeatedly pressed former American Civil Liberties Union President Nadine Strossen on what she would do if she were the head of a Jewish organization that “brings in, let’s say, a speaker about transgender issues, and members of the organization say, ‘What this person is saying is injurious to my child.’ So there isn’t a common ground here, and other people are saying, ‘No, what this person is saying is really important and actually opens perspectives that will ultimately be good for your child.’”

Strossen responded, “You invite multiple speakers with different perspectives… I’m sorry to say that we have a lot of hurtful ideas in this world and as an educator myself who could not be more committed to the welfare and well-being of every child, including yours, I know that the best way to prepare your child against the inevitably painful, traumatizing ideas that she is going to be subject in this life is to make her resilient.”

The audience applauded Strossen, but Idit Klein, president and CEO of the Jewish LGBTQ organization Keshet, said she was “very troubled” by Strossen’s remarks, and has relayed her concerns to JFNA.

“Anti-trans voices threaten the humanity of trans youth,” she told eJewishPhilanthropy. “Just as JFNA would never support antisemitic ideas at a community forum — or argue that hearing these ideas somehow strengthens young people — transphobic voices and ideas should not be tolerated.”

Fingerhut said he did not recall Strossen’s remarks in detail, but said, “I certainly disagree with the comment she’s making.” He added, “There’s no question in anyone’s mind about the inclusion policies of federations with regard to inclusion of LGBTQ professionals, volunteers, donors.”

But he said the panel is question was meant to demonstrate the idea that an offensive statement is not equivalent to exclusion of transgender Jews from federations.

“That was the exact point of the discussion… to give people a chance to be in a space where there are those kinds of disagreements,” he said. “That’s part of what is happening in our community. We have to be willing to say, ‘That’s a comment I disagree with, I wish that comment hadn’t been made.’ But I don’t think — with the greatest respect to our LGBT community — that they were under any attack or that there was anything dangerous about it. It was a comment made in a panel, with others there who could take the opposing point of view.”

The Monday morning plenary was not the only site of tense discussion. A panel on Sunday about using data and Jewish community studies sparked a debate over whether Jewish engagement is in decline, or is taking a new shape. Jewish historian Jack Wertheimer, a professor at the Jewish Theological Seminary, said “the picture does not look nearly as upbeat” as optimistic assessments of the community would suggest.

Rabbi Noah Farkas, CEO of the Jewish Federation of Greater Los Angeles, which just completed a wide-ranging community study, was more bullish about the prospects for younger generations of American Jews.

“What we found is [that] by adopting a different lens, by adopting a different way of looking at Jewish life, the future actually looks incredibly bright,” he said. “If you track what Jews do, not how they affiliate, not what institutions they’re part of… we have found in nearly every single category, Jews in their 40s and younger do more Jewish than Jews in their 50s and older. And that is true for Shabbat, that is true for Jewish text, sacred text, that’s true for Jewish media. Actually, they have Israel on their mind more.”

Stacie Cherner, the Jim Joseph Foundation’s director of learning and evaluation, also said that the foundation is “not as pessimistic about the trends that we’re seeing.”

“Young Jews [are] self-identifying in ways that are more diverse than in the past — racially, ethnically, gender, sexual orientation,” she said. “More Jews are being raised in interfaith households… I think it’s our challenge to meet young Jews where they are.”

Wertheimer suggested that some of the metrics by which younger Jews were engaging were less substantive than those he had noted, and said Jewish leaders need to pay more attention to how to “engage more Jewish people in Jewish life, [and] get away from this crazy idea that you can have Jewish life with Jews who are basically Judaically illiterate.”

“What we’re talking about here is not whether younger people have some kind of Jewish connection, will look up some articles online, for example, about a Jewish topic,” he said. “Whether we’re talking about people who are actively engaged in Jewish life — that’s the area that concerns me… What should we do about it? First of all, stop kidding ourselves.”

And even on combating antisemitism, an area that drew attention and enthusiasm from attendees, Goldstein noted gaps. He recalled that a 25,000-person march in New York City in January 2020 against antisemitism didn’t actually engage the Haredi community that had been targeted.

“Our success was tempered by the realization of who didn’t show up, at least not in great numbers,” he said. “And those were the very people who we had come out to support: the Haredi community. And we know why: There wasn’t enough trust.”