A few new platforms are using analytical tools to give the philanthropic world more data and organize it more intuitively. 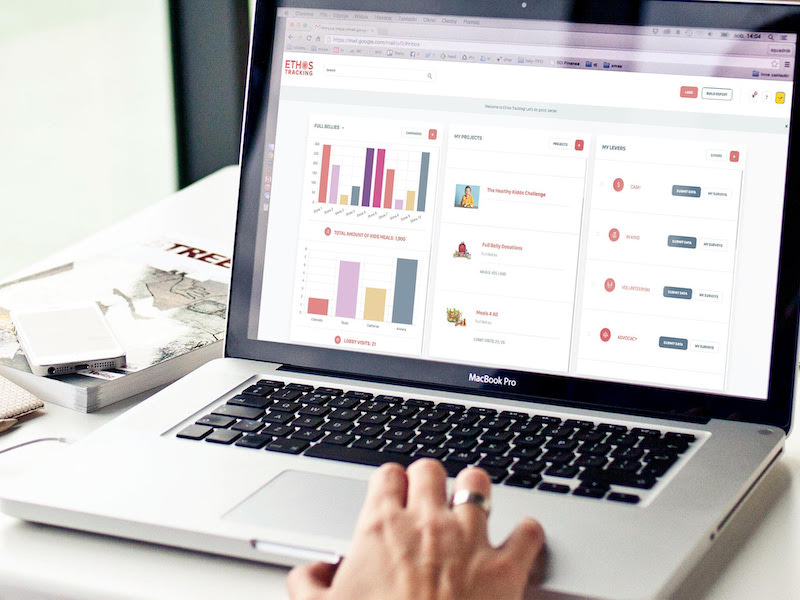 An image of Ethos Tracking's homepage.

What if a multimillionaire were lurking in your nonprofit’s email listserv, and you had no idea?

Uncovering nuggets like that is part of the goal of Hatch, a new platform launching today that aims to provide detailed profiles of donors, large and small, to nonprofits across the globe. Co-founded by a pair of Jewish social entrepreneurs, Moshe Hecht and Eyal Beigman, the company hopes to give nonprofits a far broader and deeper understanding of their donor bases, allowing them to engage many more contributors in a more targeted way and, consequently, raise more money.

By accessing a broad range of public data sources — from Facebook profiles to private foundation tax documents — Hatch has collated a maximum of 300 individual pieces of data on hundreds of millions of donors worldwide. Profiles cover everything from where a person lives to their alma mater to their political donations to their hobbies, and are sourced only from legally obtained public data. Hecht opted against scraping private facets of social media accounts.

Hatch is one of a few new platforms that use analytical tools to give the philanthropic world more data and organize it more intuitively. Hecht’s project focuses on donors, while Impala, another new business, maps out the vast and intricate finances and metrics of foundations, the nonprofits they fund and other organizations and charities working in the same space. Ethos Tracking, meanwhile, aims to quantify and categorize the multitude of ways that both nonprofits and for-profit businesses attempt to improve the world.

“That’s what we’re missing in social impact today: People are like, ‘Let’s go help homelessness, and we’ve got some cool ideas and we’re going to spend a few weeks figuring it out, we’ll cut some checks, we’ll put some stuff on our website and then we’ll think about it again in a year,’” Emily Kane Miller, Ethos Tracking’s founder and CEO, told eJP. “That’s not impactful. That’s not actually moving the needle.”

The people spearheading all three initiatives are Jewish. In addition to Hatch’s Hecht, Kane Miller previously worked as vice president of philanthropy and community affairs at the Wonderful Company, a food corporation owned by Jewish philanthropists Lynda and Stewart Resnick. Impala’s co-founders are CEO Shahar Brukner, an Israeli activist, and COO Simon Dickson, who has Jewish ancestry.

“My entire team that I work with… [is] sitting in a little room in Brooklyn, working with Israelis,” Dickson told eJP. “For me, it’s very communal, and I’ve always loved the way Judaism as a religion is close-knit and interconnected.”

Hecht came up with Hatch based on his experience co-founding and running Charidy.com, a platform for nonprofits to host fundraising campaigns. He estimates that organizations spend 90% of their time focused on 10% of their donors, potentially missing swaths of contributors who may want to be engaged but instead delete mass-emailed fundraising pushes.

In addition to reaching donors on a retail level, Hecht predicts that the data Hatch provides on donors worldwide can be used to recommend and target groups of contributors, like those who may be able to fundraise from others through running a marathon, or who may attend a charity golf tournament. The service will cost anywhere from $50 to $2,000 per month, depending on the size of the nonprofit. Hecht has invited 100 nonprofits to test the site’s beta version at a discount, and he already has 12 signed up, eight of them Jewish organizations.

Hecht said Hatch has the potential to widen the lens of organizations that, in recent years, have focused increasingly on big donors.

“It used to be that nonprofits were primarily funded… and driven by the votes of the people who were giving them the most money,” Hecht said. “Today, those nonprofits are moving into a world where they’re aided by new technology. When you gather collective dollars, you’re also gathering collective intelligence. And they’re voting with their dollars — where they want the money to go, how they want it to be spent. In reality, information on rich people is not enough. You also want information, really, on everyone.”

While Hatch focuses on donors, Impala hopes to make sense of the sprawling networks of foundations and their grantees while documenting other metrics of impact as well. The company, which was founded in 2020 but has not yet launched publicly, has scraped every single available IRS Form 990 of every U.S. nonprofit, giving it reams of financial data on more than 860,000 charitable organizations nationwide.

Brukner, Dickson and their colleagues have assembled that data in what they hope is a user-friendly fashion that, when the site launches, will allow the public to map out a myriad of connections between nonprofits. A user could look at a Jewish federation, for example, and see the geographic distribution of its grantees, what percentage of their budgets it provides, how its funding overlaps with those of other local Jewish organizations, its employees and a range of other breakdowns. The flipside of those searches is also available for the nonprofits.

Impala began out of a master’s thesis project at Harvard University, and in the early stages of founding the business, Brukner and Dickson mapped out the funding network of Combined Jewish Philanthropies, Boston’s federation. It is now setting up a partnership with the Jewish Funders’ Network (JFN), an umbrella for Jewish foundations, whereby it will give every JFN member a free membership to the platform (which, for premium access, will usually cost $1,000 per year or a bit more, depending on a foundation’s size). In exchange, JFN members will be asked to provide data to Impala, allowing it to map out JFN’s ecosystem.

So, for example, Impala’s platform will show that from 2014 to 2019, JFN’s 205 member philanthropic foundations gave $12.5 billion to more than 19,000 organizations. It also shows how many of those nonprofits have positive versus negative revenues; how many employees each has and how many are women or minorities; how many grants were given; the average and median grants; how much money entered the JFN ecosystem; how many new funders entered and how many left; and how much went to different causes, such as advancing racial equity or combating climate change.

“We want to give the ability for even the smallest nonprofits to work with the quality of data that the Gates Foundation works with, at a fraction of the cost,” said Brukner, referring to Bill and Melinda French Gates’ philanthropic foundation. “They’re already doing it; they’re just spending a lot of time on it.”

Ethos Tracking takes a broader view of what it means to do good — systematizing the impact activities of nonprofits, foundations and corporations. It was born out of Ethos Giving, a philanthropy and social impact consultancy led by Kane Miller. She found existing data organization tools clunky and was searching for what she calls a “QuickBooks for social good,” which is what she ended up creating.

The site launched in April and now has 20 clients — a mix of corporations, foundations and nonprofits. Ethos Tracking asks organizations to categorize their activity into up to 25 “levers” — anything from cash donations to in-kind gifts to political advocacy to programming or impact investments.

If a restaurant wanted to improve young peoples’ access to healthy food, for example, it could move healthy items up on its menu, donate its leftover food, source ingredients from local farms or make donations. But Kane Miller says existing systems aren’t equipped to keep tabs on that range of activity.

“We are living in a seismic shifting moment as it relates to the capacity of organizations to do good,” Kane Miller told eJP. “Anyone who has designated themselves as an actor for positive change in the world — I want them to have all of the data and all of the information they need to make better decisions, faster.”

No matter their approach, all three ventures share a goal: To make the world of philanthropy  more organized, more efficient and, they hope, more impactful.

“If you want to move the needle forward on an issue — whether that’s Judaism, whether that’s climate change — we need to understand how the system looks, how people are working together, what this looks like from 1,000 feet,” Dickson said. “We want every member of this ecosystem… to have the ability to make data-driven, impactful decisions.”

CORRECTION: Simon Dickson is Impala’s COO, not its CTO.