Teen Talk, which was founded by a Los Angeles Jewish organization, trains adolescents to counsel their peers. 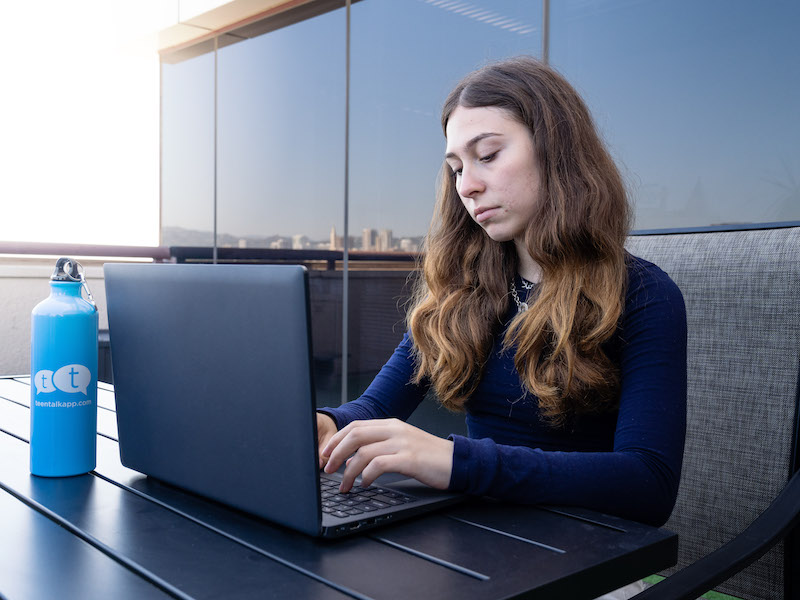 When the pandemic began, Carly P., a teenager from Westchester County, N.Y., got what she described as “a wake-up call”: One of her friends had become depressed and was contemplating suicide. After the incident, Carly realized she wanted to help those who might not have access to mental health resources and found Teen Talk, an app created by the Jewish Big Brothers and Big Sisters of Los Angeles (JBBBSLA) and staffed by teen advisors who provide anonymous, mobile, free support to their peers.

Teen Talk is far from alone among online mental health support systems. But the model of teens giving advice to teens creates a comfortable atmosphere for young people who turn to the app, James Finney Conlon, JBBBSLA’s director of communications and outreach, told eJewishPhilanthropy.

The teen advisors “respond to these posts in really meaningful and empathetic ways and make the other teens feel listened to, validated and like they’re not alone,” Conlon said. Advisors sometimes speak from personal experience, he said, but always “come from a place of being grounded.”

“It’s a place for teens to finally be heard and understood and feel like they’re listened to, rather than being judged or seen as a threat to themselves or a problem person. It’s teens empathetically responding to other teens and giving them that validation that’s often missing…So it’s often like a first point of contact.”

Recent data show that that point of contact is especially necessary now. According to the World Health Organization, one in seven 10- to 19-year-olds experiences a mental disorder, and depression, anxiety and behavioral disorders are among the leading causes of illness and disability among adolescents globally. Suicide is the fourth leading cause of death among 15 to 19 year-olds. And according to the National Alliance on Mental Illness, 11.3% of American young adults ages 18 to 25; 18.8% of high school students; 42% of LGBTQ youth; and 52% of LGBTQ youth who identify as transgender or nonbinary have had serious thoughts of suicide.

The Teen Talk app launched in 2018, but during the pandemic, users flowed into the platform at an increased rate. Recent submissions included, “How do I know if I’m depressed?” ;“I got anxiety meds and my mom keeps wanting me to have them, but I’m scared of the side effects.”; “I don’t like my friends or family right now. I feel so stuck and alone and stressed. I don’t know what to do.”

About 3,000 users ages 13 to 19 from 100 countries all over the world seek help on the Teen Talk platform monthly, asking for support and guidance on topics such as eating disorders, gender identity issues and depression. Users, who are not identified by name or photo, also use the app to help cope with stress factors like academic and parental pressure and relationship challenges.

After having trained for more than 50 hours, the 140 teen advisors serve in shifts of one to two hours about twice a month, between 5 p.m. and 10 p.m. Pacific time. They are identified on the platform by a number (“Advisor 24”) to use as they offer support, assistance and resources, often using a pseudonym (“Hi, I’m Chloe…”) to make the app feel warmer. Users can leave messages or posts at any time and receive an auto-response that tells them they’ll get a response from a teen advisor during one of the staffed shifts.

Adult supervisors, all of whom are licensed mental health professionals, take the same one to three shifts every week, covering the entire time Teen Talk is open and including extra time to check in with the teen advisors before and after their shifts. Each Teen Talk advisor is paired with a supervisor who monitors each conversation for potential crises and flags serious situations that may require intervention by a licensed professional. The supervisors can join the conversations if needed.

While the app has a global user reach, all advisors and supervisors are based in the U.S., and support is provided in English, although the app’s creators hope to offer translation in the future.

“I’m so stressed about life after high school cause I have no clue what I even want to do with my life and i graduate in may,” reads the post by a 17-year-old female who is identified only by an auto-generated username, ‘Curved Turkey.’ “I’m just so depressed lately cause seasonal depression and everything is just slipping between my fingers.”

Teen Talk Advisor 47 responded: “Hi there, I’m sorry to hear about how you’re feeling. The transitional time after high school is difficult for many people and I can totally understand how hard and stressful it must be for you. It’s a big adjustment and can be quite overwhelming. Feeling depressed must make this time even more difficult, and I get it. Can you tell me more about a particular aspect of life after high school that stresses you out the most?”

Teens in high school, or about to enter it, can train to become advisors. While a few advisors have stayed through their first two years of college, they are expected to age out by 20 because they deal with different challenges at that stage of life, said Kendra Singer, originally a marriage and family therapist, now the program director for Teen Talk who oversees its supervisors.

Potential teen advisors complete an extensive application before their hours of training start so that Teen Talk staff can assess how the aspiring advisor would express themselves in a peer support conversation. Staff also engage with potential advisors’ parents to make sure they know what their child is signing up for.

“We screen for where they’re at in terms of their support system,” Singer told eJP. “We know that this can be a very taxing and stressful volunteer experience and can be triggering for kids who have lived experience.”

Teen Talk also looks for candidates who can be communicative and open, Singer told eJP, because the teen advisors may be experiencing stress or challenges themselves.

“We need them to communicate, ‘I’m having a hard time, I need a break,’ or ‘Right now, it’s not the best time for me to give support,’” she said. “The goal is not for them to grind through this and get all their hours in. The goal is for them to be able to be good with themselves before they can give support to others.”

Stacy, a licensed social worker and Teen Talk supervisor in Los Angeles, said that she joined Teen Talk as a way to connect with a community during the pandemic while also working full-time and parenting; because her professional experience is with teens and family, the app was a natural fit.

“I always tell [the advisors], ‘If you’re stuck, or if you don’t know what to say or need support, just reach out to me,’’” added Stacy, who asked to be identified by a pseudonym out of concern that it could affect her private practice.

Initial seed funding for Teen Talk came from the Los Angeles Jewish Community Foundation’s Cutting Edge Grants program in 2018, along with a 2019 grant from the W. M. Keck Foundation. The program has an annual budget of $500,000. Other than the salaries of the core Teen Talk staff at JBBBSLA — totalling two full-time and two part-time employees — Singer said the biggest expense is retaining the app’s four supervisors.

As Teen Talk grows, it has created a new partnership model, offering advisor training to cohorts of teens in other youth organizations. For example, the Jewish Community Federation and Endowment Fund in San Francisco pays Teen Talk to train and supervise a cohort of Bay Area Jewish teens as Teen Talk advisors, Singer said, “allowing them to provide innovative new mental health programs to the youth they serve while helping us expand our reach.”

Since she began supervising teen advisors about eight months ago, Stacy said their openness has impressed her.

“Adults don’t necessarily always give a lot of grace to people,” she said. “There’s so much pre-judgment or maybe unconscious bias…just the level of compassion has been pretty amazing.”

Stacy recalled the previous night’s shift, in which the teen advisor she was supervising was having an intense conversation with a user. “She was just kind and brave to stay in there,” Stacy said, ”By the end, this teen that was pretty upset was able to be in a much different space, an hour later. That was pretty cool when you can kind of just see it, from beginning to end… I wish more humans were like that.”

Carly, the teen who discovered Teen Talk near the beginning of the pandemic, has been an advisor with the app for about seven months. After completing the training, she was chatting online with a girl around her age who was struggling with everything from fighting at home to school stress and worries about paying for college.

“I listened closely throughout my shift and I helped her with strategies and coping skills,” Carly told eJP. “I did not solve all her problems. However, at the end of my shift, the girl said to me, ‘Thank you for all your help. It was nice having someone to listen to me.’ I realized that it is simply about listening without judgment that makes a difference in these teens’ lives.”