The clinic is launching amid increasing reports of sexual violence by Russian troops. 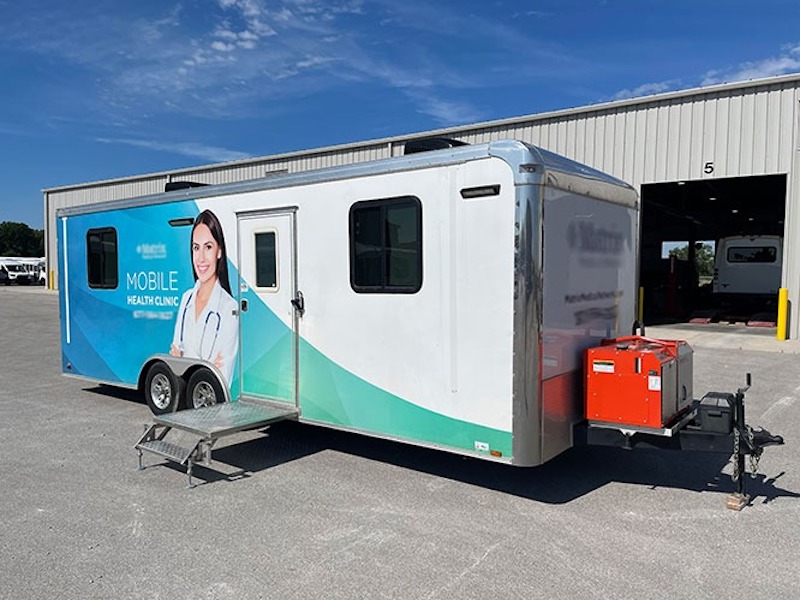 The trailer that will soon become the health clinic.

In the middle of the summer, Brian Abrahams, CEO of American Friends of Sheba Medical Center, received a call from the large Tel Aviv-area hospital with an unexpected request: Could he wire $60,000 to a company in Ohio to buy a trailer?

“Sheba Medical Center is an Israeli government-affiliated hospital, they can’t simply be wiring money out of the country, especially for something that’s not budgeted,” Abrahams told eJewishPhilanthropy. “So, [we] bought this trailer.”

Over the next several months, the trailer was shipped to Hamburg, Germany, where it was outfitted with ultrasound machines and stocked with medical supplies as part of the hospital’s latest venture in Ukraine: A mobile clinic to treat STDs and provide reproductive health services for women and children across the country.

The clinic is being organized with Corridor, an Israel nonprofit providing aid to Ukraine, and Kvitna, a Ukrainian reproductive health fund. It will include two examination rooms in the space of a small mobile home, and its Ukrainian staff comprising an OB/GYN, a psychologist and a nurse will be able to treat roughly 20 patients a day, and will offer telehealth appointments with Sheba doctors in Israel.

The clinic will also provide abortions — an operation that an increasing number of Ukrainians need, according to the clinic’s founders. Early on in Russia’s invasion of Ukraine, “there appeared women and girls who, after the bomb shelters and bombings… were in a terrible state,” said Uriel Shtern, the founder of Kvitna, “with a variety of reproductive health issues brought out by the war, as well as rape.”

The reported prevalence of rape by Russian soldiers — targeting Ukrainian boys as well — makes hosting a mental health professional in the clinic a key part of the initiative for Sheba. Survivors may not be ready to talk about their experience out of a sense of shame, let alone explain their needs to a doctor, said Yoel Har-Even, head of Sheba Global, the international arm of the hospital, which has provided medical aid and training to Ukrainians since the start of Russia’s invasion.

“If you get given good care for the physical issues, but you’re not taking care of the mental issues, there won’t be any success getting those kids back to society and back to a normal life,” Har-Even told eJP. “Therefore, for us, it’s very important that the physical treatment will be surrounded by a mental treatment as well.”

Iulia Mandel, a former press secretary for Ukrainian President Volodymyr Zelensky, wrote in the Washington Post in July that reports from human rights groups and the United Nations, plus a “growing body of anecdotal evidence,” suggested that sexual violence had become a significant problem during the war.

“The fraught nature of these atrocities, which are historically underreported, means that it will be a long time before the full scale of the problem is clear,” Mandel wrote. “Collecting reliable data is extremely hard. In Ukrainian society, and especially in rural areas, sexual crimes are so stigmatized that victims fear being judged. It is usually the victim’s relatives and friends who seek help on the victim’s behalf.”

The mobile clinic emerged as an idea in the spring in conversations between Corridor and Kvitna, which were already collaborating on evacuating Ukrainians and organizing humanitarian and medical aid to Ukraine. But it took a chance meeting in Poland, at the Krakow airport in late April, to bring Sheba into the project, which lacked medical expertise and, perhaps most crucially, funding.

Har-Even was on his way back to Israel after working on Sheba’s temporary field hospital in Ukraine when Oran Singer, co-founder of Corridor, introduced himself. “I got a call and spoke Hebrew. [Singer] heard that I’m speaking Hebrew, and we started to talk to each other and ask each other, ‘What are you doing here?’” Har-Even recalled. “I told him my story. He told me his story. The rest is history.”

Unlike Sheba’s field hospital — funded by the Israeli government along with the Charles and Lynn Schusterman Family Philanthropies and the American Jewish Joint Distribution Committee — the mobile clinic isn’t getting Israeli government support. One year’s operation, between the cost of supplies, fuel, and doctors’ pay, is expected to cost upwards of $500,000. For now, the hospital is fronting the operating costs of the mobile clinic and hoping to make them up through philanthropy.

“We’ve been tasked with raising” the funding, said Abrahams, of the American Friends of Sheba, which will reimburse the hospital for the clinic’s expenses. For the moment, Abrahams thinks a targeted campaign to a handful of major donors will both keep fundraising costs down and be able to cover the costs of the initiative.

“There’s some very successful Ukrainian-American, Ukrainian-Jewish-American philanthropists,” he said, adding that he’s had “some initial conversations with a few” of them.

Meanwhile, the clinic is about to begin operating. In mid-November, the trailer was shipped to the Polish-Ukrainian border, where the organizers have been waiting to finalize operating permits with the Ukrainian government. Har-Even expects the last of the bureaucratic hurdles to be cleared and for the clinic to be treating patients this month.

The clinic will start working in western Ukraine and, over time, will make its way to the eastern part of the country, where residents of areas recently freed from Russian control have a greater need for treatment. The initiative will fill a crucial hole in the Ukrainian health care system as many doctors have either fled the war or been killed, while hospitals have been bombed by Russian forces, Shtern said.

“Even if the war ends tomorrow, the health care system won’t get back up on its feet,” he said. “In all the liberated territories, there’s nothing, the hospitals are destroyed.”

Sheba will also be training Ukrainian doctors in the areas in which the clinic works, so when it leaves they can follow up with patients and continue treatment. Har-Even hopes that the mobile clinic can be scaled up soon, with several clinics deployed across Ukraine. But in the long-term, once a cease-fire or end to the war is reached, he plans for Sheba to build permanent shelters to help treat Ukrainians and care for them – especially children.

“We are talking about hundreds, if not thousands of kids now wandering all over Ukraine…some of them lost their parents, so there is no one to take care of them,” he said. The mobile clinic is a temporary solution, and “those kids need to have a place to put their head with a warm pillow and soup at the end of the day, which we cannot deliver right now due to the situation.”

While motivated first and foremost by the humanitarian need in Ukraine, for Har-Even the mobile clinic is also a deeply personal project inspired by his Jewish heritage.

Har-Even’s late grandmother was a Holocaust survivor from Ukraine, and when he left for Ukraine in the spring to organize Sheba’s field hospital, his mother tried to stop him by invoking the family’s traumatic past there. Har-Even told her it was precisely because of that history that he needed to help Ukrainians.

Kvitna’s Shtern is grateful for the support the clinic has gained, and sees the project as an example of how Jews around the world continue to prioritize aid to Ukraine. “They didn’t close their eyes at such a tragedy,” he said. “Israelis and Americans are showing an example to everyone else, you can’t stay silent.”