feet on the ground

A large NYC synagogue will be visiting the Ukrainian border

It’s at once an indication of the Jewish community’s sustained, and even escalating, commitment to Ukraine, and another sign that Jewish groups that are focused on the issue are following the playbook they use for another country beset by violence: Israel. 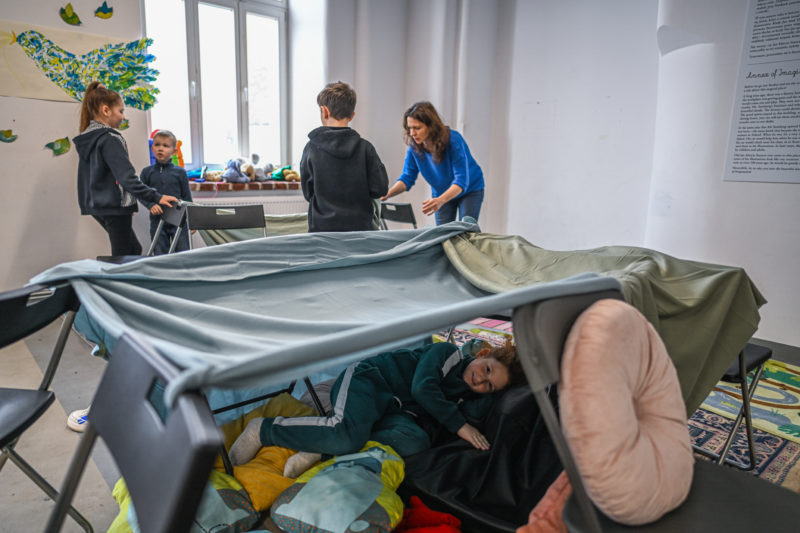 Children from different cities including Mariupol who fled the war in Ukraine build an improvised "house" with chairs and blankets in Krakow, Poland

When news of Russia’s invasion of Ukraine broke, the congregants of the Reform Stephen Wise Free Synagogue (SFWS) in Manhattan had the same reflex as people across the world: They opened their wallets, collectively donating $150,000 for humanitarian relief.

Now, more than six weeks later, the congregation is doing what perhaps no other synagogue in the United States has yet done: organizing a congregational mission to the border to speak with refugees and observe the work of Jewish aid groups. It’s at once an indication of the Jewish community’s sustained, and even escalating, commitment to Ukraine, and another sign that Jewish groups that are focused on the issue are following the playbook they use for another country beset by violence: Israel.

Like Jews have done for decades during conflicts in Israel, communities are raising money, sending leadership delegations and now organizing congregational missions. SFWS’ senior rabbi, Ammiel Hirsch, is an outspoken supporter of Israel in the Reform movement who said that when it comes to the Ukrainian border, as in the Jewish state, there’s no substitute for putting your feet on the ground.

“I felt it was important not only to write a check but to do something that would bring us into contact with suffering people,” Hirsch told eJewishPhilanthropy. “There is nothing that can replace Jewish missions, synagogue missions… Nothing comparable can penetrate the hearts of Jews, in order to build the strongest possible Jewish identity, than actually going to important Jewish places.”

Hirsch outlined the mission in a sermon last Shabbat in which he drew a parallel between Israel’s fight against terrorism and Ukraine’s battle against its Russian invaders. He said the goal of the trip was to bring “your warmth, your compassion, your humanity to Ukrainians who have lost everything” — in addition to duffle bags full of supplies. Like previous Jewish delegations, they’ll travel to Poland’s border with Ukraine, and hope to visit a field hospital; meet with aid workers, Israeli volunteers and refugees; and hear from diplomats and analysts.

So far, 57 people have expressed interest in the four-day trip, though Hirsch expects no more than 35 people to go. That’s smaller than the synagogue’s missions to Israel, which are planned further in advance — one is scheduled for December — and can exceed 100 participants. The Ukraine trip costs close to $3,000 a person.

Despite the advice of some aid organizations that say monetary donations are more helpful than dollars spent on solidarity visits, Hirsch believes that a visit will lead to a deeper commitment and more contributions because participants will “build an intellectual and emotional identification with the task at hand.” He will aim to persuade people to “sustain their willingness to provide some kind of financial and other support.”

Hirsch is also not worried that drawing his congregants’ attention to Ukraine will detract from  their focus on, and donations to, Israel.

“The more you ask people to do, and the more they get inspired, the more they do,” he said. He wouldn’t send the message, he said, that “We’re not going to impose on you too much because we fear that you will tire of us or not have the bandwidth to be able to sustain intellectually or programmatically what needs to be done. Our experience is exactly the opposite.”