The coalition represents the widest Jewish organizational response yet to the climate crisis. 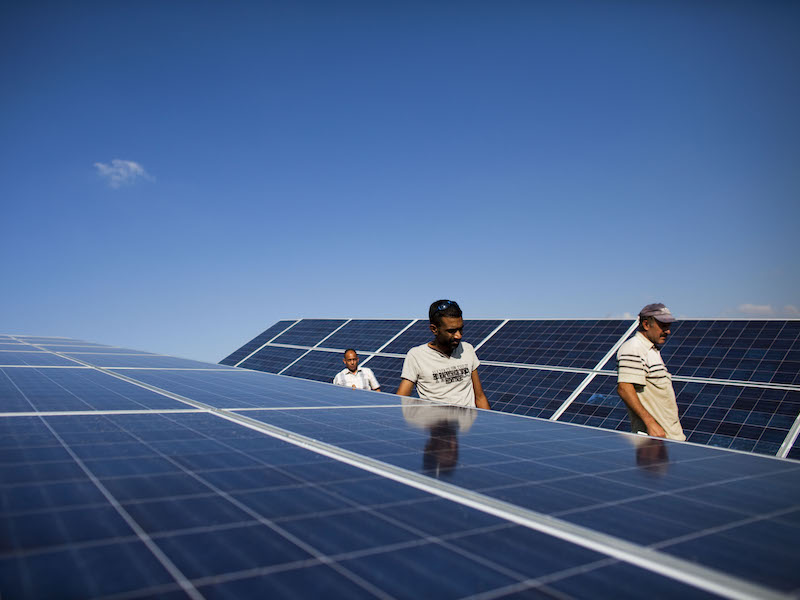 Workers install photovoltaic solar panels to create electricity from the sun on the roof of a chicken coop in Israel in 2009.

When she thinks about her Conservative Jewish organization’s efforts to combat climate change, Rabbi Ashira Konigsburg can point to a range of programs, from webinars on energy efficiency to youth group actions. But, she said, “it wasn’t happening in a systemic or organized way.”

Now, that’s changing, as the movement’s umbrella associations of rabbis and congregations — the Rabbinical Assembly and United Synagogue of Conservative Judaism — are two of 20 major Jewish organizations to sign onto the Jewish Climate Leadership Coalition, an effort being launched on Thursday by the Jewish environmental group Hazon to organize the Jewish community around climate activism, eJewishPhilanthropy has learned.

“Everyone knows it’s bad, it’s terrible, it’s scary, but it’s very hard to know what, individually, we can do about it,” Konigsburg, the COO of the RA and chief program officer of the United Synagogue, told eJewishPhilanthropy. “What feels different about this campaign is that, across a breadth of organizations, we’re all taking action and there are steps we can take that are meaningful.”

The coalition represents the most robust Jewish organizational response yet to the climate crisis. It has attracted organizations that, collectively, represent and serve a broad cross section of Jews in the United States and Israel. The members represent all four major denominations of Judaism, include facilities that serve Jews from the cradle to the assisted living facility, and span the organized leadership of communities across the country and in Israel.

“Organizations and Jews across America — an overwhelming majority — understand that the climate crisis is real, understand the urgency and want to do something,” Liore Milgrom-Gartner, Hazon’s deputy climate action director, told eJP. “Generally the question is how, and what do I do first? And so the coalition will be a resource to accept people where they are and help them take these first steps.”

The coalition is forming at a time when governmental bodies are becoming more active in reducing greenhouse gas emissions and warnings of catastrophe have become increasingly dire. A report in April by the Intergovernmental Panel on Climate Change said that countries need to reduce their emissions dramatically by the end of the decade, and completely by 2050, in order to avert the worst effects of climate change.

In recent weeks, Congress passed a bill investing some $370 billion in clean energy production and California enacted a plan that requires all new cars sold in the state to be electric or hybrid by 2035. On Wednesday, the family of Yvon Chouinard, the founder of apparel company Patagonia, transferred ownership of the company to a group of nonprofits and trusts that will donate all of its profits to fighting climate change and protecting undeveloped lands.

A survey earlier this year by the Jewish Electorate Institute, a liberal polling group, found that 29% of Jewish voters said climate change was one of the top two issues they wanted the president and Congress to focus on, the biggest share for any one issue. Jewish environmental groups have been active on climate change for decades, and an activist group called Dayenu launched in 2020 to organize Jews around the issue. Dayenu CEO Rabbi Jennie Rosenn told eJP that Hazon’s climate coalition “offers a valuable entry point for Jewish institutions to confront the climate crisis and orient their culture toward climate action.” Both Dayenu and the Jewish Earth Alliance are partner organizations to the coalition initiative.

The scale of government and corporate action on climate will far outstrip the capacity of the organized Jewish community. But Risa Alyson Cooper, Hazon’s chief climate officer, believes that the coalition members can serve as advocates of change and examples to other religious communities that want to take action on the issue.

“The Jewish community is indeed small, so even if we are able to achieve all of our goals with the Jewish Climate Leadership Coalition… in terms of the global climate crisis I don’t think we can pat ourselves on the back and say, ‘We did it,’” she told eJP. “I think that it would still be a step in participating in a culture shift… If this is something that we are able to scale up within the Jewish community, there’s also an incredible opportunity to scale it and replicate it within other faith-based religious communities.”

In order to join the coalition, organizations had to commit to three provisions: They had to sign onto a founding statement declaring, among other things, that “Jewish values compel us to confront this crisis.” They committed to designating a staff member who will spend from two to 10 hours a month on the organization’s climate response. Perhaps most significantly, each organization must formulate a climate action plan outlining what steps it will take to reduce emissions and remain active in confronting climate change.

In addition to the major religious denominations, among the coalition’s constituent groups are the Jewish Federations of North America, The Associated: Jewish Federation of Baltimore, the Jewish Agency for Israel, Hillel International, Israel’s Foreign Ministry, Birthright Israel, the Jewish National Fund USA, Moishe House, JPro and the Network of Jewish Human Service Agencies. Hazon hopes other Jewish organizations will join now that the effort has launched.

Hazon’s climate staff includes six employees, and the organization, which is in the process of merging with the Pearlstone Center, is investing more than $1 million out of its $12 million budget into climate activism: $500,000 of that will be available as interest-free loans to help coalition members execute their climate action plans, a number Hazon hopes will grow.

Organizations must make the plans available to the public by the Jewish arboreal holiday of Tu B’Shvat, which falls next year on Feb. 6, and must update them annually. Hazon hopes for Jewish organizations to eventually reach net-zero emissions, which would mean sourcing all of their energy from clean sources or offsetting their carbon footprint. To pursue that target, Hazon says, organizations can make their facilities more efficient, obtain more of their energy from renewables, use more electric appliances or change the way they source their food and other goods. Hazon also hopes some plans include education and programming around climate change.

“Expanding communal impact — education, advocacy, finance — [are] things that can’t easily be tied to your organization’s emissions but nevertheless are clearly important,” Hazon CEO Jakir Manela told eJP. “If somebody says, ‘We’re signing on,’ and then they release a climate action plan that’s like, ‘We’re not going to do anything,’ or ‘We’re going to plant three trees,’ that’s going to be open to the public.”

But Manela emphasized that at this stage, there’s no minimum requirement plans must meet, nor specific actions organizations must take beyond making the three initial commitments. Hazon’s goal is to recruit as broad a swath of the community as possible, and Manela believes that the fact that the plans are public, combined with the reality of climate change, will push organizations to meet and then increase their commitments year by year.

“There literally is no bar, there is no standard in the Jewish community for climate action and sustainability and there never has been,” Manela said. “So this initiative is already unprecedented.”

Some of the member organizations have national networks whose members collectively have large geographical footprints — from the Foundation for Jewish Camp (FJC), which has more than 300 member camps, or the the JCC Association of America, an umbrella group for 170 community centers across North America. JCCA CEO Doron Krakow hopes membership in the coalition will encourage local JCCs to, for example, make their heating and cooling systems more efficient or pursue sustainable farming on their campuses.

“We will capitalize on our opportunity to promote the places that are doing the most exemplary work… and lend our support to places that want to do better,” Krakow told eJP. “We have a shared commitment to collective good, and the guidelines that we create are intended to support decisions that are made locally.”

Jeremy Fingerman, FJC’s CEO, said many camps already prioritize education in nature, something he expects to be part of the group’s climate work moving forward. He added that the camps can also help reduce emissions.

“This is a chance to really help educate the next generation about the issues around climate, our environment and nature,” he told eJP. “Can some of the acreage be converted into a solar farm? It can provide energy for the summer but also collect energy that goes into the grid… When you think about composting and everything that can be used in the acreage, I think there are so many ways that camps can bring to light both the Jewish values [and] the experiences.”

Other groups feel their contributions may lie elsewhere. The Jewish Funders Network has worked to make its conferences paperless in order to reduce waste, and will give future attendees the option to buy carbon offsets for their travel.

But its main climate work, said Rabbi Rebecca Sirbu, the group’s executive vice president, is engaging funders around supporting green initiatives. JFN has a Green Funders Forum and will be encouraging its members to join the coalition. Sirbu said younger funders are especially engaged around the issue. “As an organization we are committed to putting environmental, climate-related content front and center in our programming,” she said.

Climate change is still a divisive issue in the United States. According to the most recent data from Gallup, 40% of respondents feel the seriousness of global warming is generally underestimated, but 38% believe it is generally exaggerated (the remainder of 21% say it is generally correct). National Jewish organizations that are members of the coalition believe that constituents in locations where people are less concerned with climate change may still be engaged in the work.

“Climate change is already impacting all parts of North America,” Konigsburg said. “Whether or not you’re in a red state or a blue state, you’re seeing the impact… This is a long game. We’re not going to impact everybody in the first year. We’re hoping to have an impact over time.”

While Manela hopes that more Jewish organizations sign onto the coalition in the coming weeks and months, he added that Hazon is looking at the initiative on a “shmita scale” — referring to the seven-year Jewish agricultural cycle that is restarting with the upcoming holiday of Rosh Hashanah. As the years pass, he expects a larger number of Jewish groups to become only more invested in fighting climate change.

“We’re trying to support everybody in figuring out how far they can go,” he said. “This is a coalition of the willing and I’m proud to say that the Jewish community is showing up right now in a huge way.”