A discreet network of activists, organized by Jews, is getting people out of Ukraine

Jewish organizations have delivered millions of dollars of aid to Ukrainians. This grassroots network has coalesced in tandem — focused on providing immediate assistance to civilians on a touch-and-go basis. 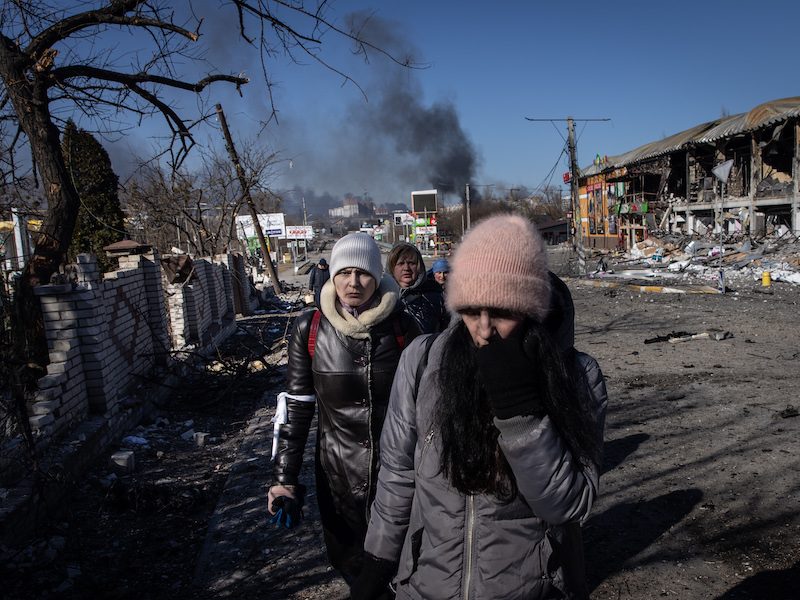 Ukrainians evacuate from a suburb of Kyiv on March 10, 2022.

To get 60 people out of an embattled city in Ukraine, you need a bus that costs $10,000. Then you need to find a driver you can trust who’s willing to drive the bus on the country’s treacherous roadways. You also need gas for the bus.

You must get in touch with the people who need to evacuate — and who often have unreliable cellphone service and are afraid to go outside. You need to tell them where to meet — but not too early, or the bus’ location could be discovered by someone intent on harming civilians. You need to get everyone on the bus during an exceedingly narrow window of time when Ukrainians are not under nighttime curfew and Russian forces are not shooting in the streets. Sometimes, the plan needs to change on the fly as the attacks shift.

Only then can they begin their perilous journey to the border.

Those are some of the myriad challenges facing a discreet network of grassroots activists, convened and funded partly by Jews, that has sprung up during the past two weeks. Its mission is to evacuate and deliver aid to some of the millions of Ukrainian civilians, Jewish and not, facing both starvation and Russian weaponry.

Since Russia invaded Ukraine late last month, a range of Jewish organizations with years of experience and robust infrastructure in Eastern Europe has delivered millions of dollars’ worth of humanitarian aid and help to refugees. This grassroots network has coalesced in tandem — focused on providing immediate assistance to civilians on a touch-and-go basis.

It isn’t connected to any nonprofit, and its volunteer organizers prefer to remain anonymous, fearing for the safety of their operations. While the lead organizer of the initiative declined to speak to the press, eJewishPhilanthropy was invited to a virtual briefing the organizers gave on Thursday to a group of around 100 funders and activists, many of them Jewish — provided that names, affiliations and locations were not disclosed

“In most disasters you need both — there’s the short-term immediate relief, getting people fed, getting supplies in, getting people out,” Charlene Seidle, executive vice president of the Leichtag Foundation, told eJP in an interview. Leichtag, a San Diego- and Jerusalem-based Jewish grantmaking organization, has donated hundreds of thousands of dollars to date to Ukraine relief efforts, both grassroots and organizational, and hosted the briefing.

She added, “And then there’s going to be much longer-term needs around refugee resettlement, longer-term medical needs, psychosocial services [and] educational services.”

The grassroots effort grew partly out of Jewish communal connections. The person who connected many of the activists, and who works at a Jewish organization, realized about 10 days ago that they knew people — and knew people who knew people — who had been active in Ukraine and might be able to deliver aid to those in the country. The person then connected their contacts via online messaging services, and the aid operation began to grow.

“I’m part of many different kinds of networks — nonsectarian networks, professional networks, Jewish networks… and over the past number of years I’ve developed relationships around the world,” the person said during the briefing. “I started gathering people from different networks because I felt strongly about the strength of [informal] ties. I had remembered from previous crises that we needed to make sure that people were talking to each other.”

Since then, the organizers have been on their phones nonstop, trying to organize guerrilla aid operations like evacuation buses and 20-foot-long trucks full of supplies (approximate cost: $200,000) that they hope will get food and medicine to starving families. Businesses in Europe have donated the trucks and gotten supplies to the grassroots organizers, but getting those supplies into and around Ukraine is getting harder.

One of the organizers said the network recently succeeded in getting three buses to take 180 people out of a city under attack. Now, in order to get more people out, they’re trying to load a car with 200 liters of fuel that other vehicles can use to reach the border.

“Every day we can’t get them out is one day more they’re going without food,” said that organizer, who has experience working with people in conflict zones, regarding the Ukrainian civilians. “Without knowing each other, [the organizers] get things done, and because we have this unconditional trust, everything gets done so fast and effectively.”

Seidle isn’t worried that the support Leichtag is giving will be misappropriated or misused because it isn’t going through normal philanthropic channels. Leichtag is giving money to people its employees know personally, or who have otherwise been vouched for. The foundation is in daily contact with the organizers to make sure they have what they need, and because the needs are so specific, they can sometimes view receipts for purchases.

She added that a certain level of uncertainty is inevitable in crises like these, but that it shouldn’t be a barrier to helping people in urgent need. When“you know 50 people are evacuated because of a bus you paid for, and they have been saved, that is very, very meaningful and rewarding,” she said.

“We do due diligence, and you have to do due diligence quickly in these situations through relationships,” she said. “At the end of the day, we’re in a disaster situation. Everyone has to make decisions in a split second, and you do the best you can in a limited amount of time… We really should be taking risks, so that’s what we do. We take calculated risks.”

Beyond the harrowing logistics of helping people under military assault, the organizers noted a few pitfalls they need to avoid while trying to do good — like the possibility of goods being stolen, or the fear that women seeking to flee Ukraine will fall prey to human traffickers.

“We already know of stories on the border” of human traffickers, said a third organizer, who also aided Ukrainian civilians during the 2014 conflict with Russian-backed separatists in eastern Ukraine. “We know that people are just getting in cars. We know that someone gets an offer of work — If you get an offer of work to come stay in my house because you’re going to clean my house or something like that, don’t take it.”

The organizers were also clear on another point: That most people who want to help Ukrainians should not personally go to the region unless they know the language, are familiar with Ukraine and can get connected to a reputable group doing aid work.

“The idea of drivers coming from Israel to help — if they know Ukrainian, maybe, but if they don’t, I’m not sure it’s a good idea,” a fourth organizer said. “For sure don’t go on your own. That’s a very bad idea.”

In any case, volunteers are streaming to the region, from U.S. military veterans joining the fight against Russia to aspiring humanitarian aid workers. Scott Nadler, a former U.S. Defense Department official with decades of experience working with the former Soviet Union, who speaks Russian, is going to Moldova’s border with Ukraine as part of a team from Refugee Support, an aid group. He’d also volunteered with the group in Greece several years ago, assisting Syrian refugees.

“There are a lot of people who care about these issues and are willing to take two or three weeks off,” Nadler told eJP. “Right now, we don’t need a lot of people to just come over and be helpful. In three months, when our food banks and our clothing banks are set up, then yeah, you don’t need to be a Russian speaker.”

Now, the anonymous grassroots organizers feel like they’re racing against time — trying to help people before they die of hunger or in a bombing, before the border potentially closes, and while mass evacuations are still possible.

“The infrastructure is being destroyed,” one of the organizers said. “The roads are being destroyed. So we are facing new challenges. So yesterday we were talking about big trucks, and tomorrow we may talk about small cars.”