Facing antisemitism and competition, Hillel aims to raise $150 million as it marks its centennial

In a wide-ranging interview, Adam Lehman, Hillel International's president and CEO, discussed how Hillel deals with rising hate against Jews, controversy over Israel and the growing presence of rival groups. 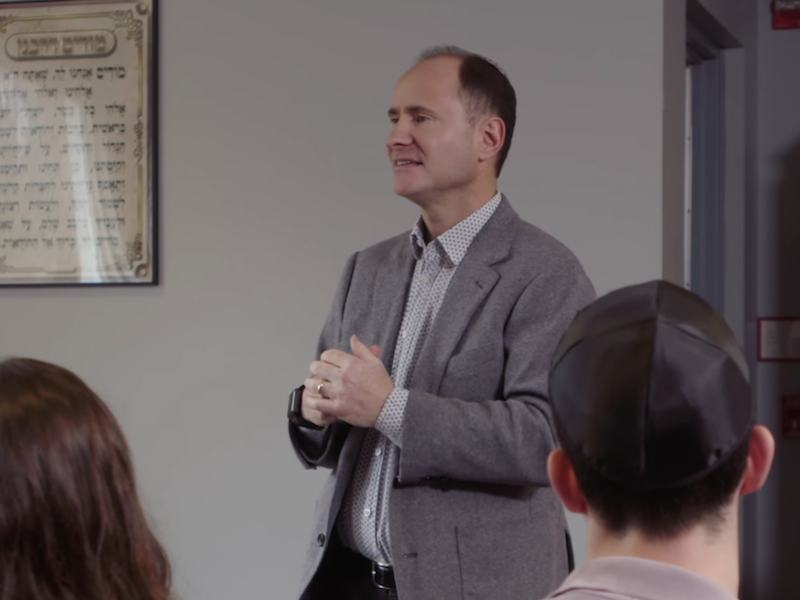 When major nonprofits launch fundraising campaigns in the hundreds of millions of dollars, the target number is often tied to a capital project or a major new initiative.

Not so with the $150 million campaign being announced today by Hillel International at the beginning of its Global Assembly in Dallas, marking the Jewish campus organization’s centennial. Titled “The Promise of a New Generation,” the campaign, conducted via local Hillel chapters, is targeted mainly at funding the operational expenses and growth of Hillels nationwide and globally.

While Hillels will be able to use the funds for innovation, implicit in the campaign is the idea that, rather than changing course, Hillels need to keep doing what they’ve been doing — only more so.

“It’s critical moving forward that Hillels on a campus level, and that the overall Hilel movement, have risk capital that can be deployed towards needs as they are being identified on campus,” Adam Lehman, president and CEO of Hillel International, told eJewishPhilanthropy in a wide-ranging interview last week in New York City.

“There’s been such a shift towards restricted and programmatic-based giving in recent years,” he said. “That’s important and has a relevant role to play… At the same time, the centennial campaign will provide more unrestricted resources to support local decision making to meet student needs.”

But while Lehman feels that the existing Hillel model is successful, it has changed both qualitatively and quantitatively in the century since it was founded at the University of Illinois in “a rented spot above a barbershop,” in Lehman’s words. Initially focused on providing students with Jewish education and affiliation, the movement has vastly expanded across the country and world and now serves as a home for Jewish activities ranging from Shabbat dinner to pro-Israel advocacy to social service to fighting antisemitism — as well as being a national voice on Jewish issues such as domestic hate crimes and Ukraine aid.

In recent decades, it has become one in a constellation of national Jewish organizations with local campus affiliates. And it has encountered controversy both in determining how to respond to campus antisemitism and anti-Zionism, and how and whether to include Jewish students whose activism crosses its red lines on Israel.

“Our priority at Hillel has always been and will always be promoting the joyful and inspiring parts of Jewish life,” Lehman said. “At the same time, we know that young Jews cannot freely explore their identity and engage in Jewish life if they are being ostracized or demonized for doing so.”

Hillel was first founded at the University of Illinois at Urbana-Champaign in 1923 partly out of “the fear of Jews losing their Jewish identity — be that mainly of an ethnic, religious, or cultural variety,” according to a 2016 paper by University of Michigan professors Andrei S. Markovits and Kenneth Garner. The idea of Hillel was conceived by a non-Jewish Bible professor, Edward Chauncey Baldwin — who was worried about Jewish students’ lack of Jewish knowledge — and his Jewish colleague Benjamin Frankel, who first led the group. At the time, the university had about 300 Jewish students.

In comparison, Hillel today is a behemoth, serving more than 850 campuses around the world, and a total of 140,000 students annually. Some 1,200 employees work at Hillels across the system, and Hillel International’s annual budget is approximately $56 million. Taken together, the budgets of all Hillels worldwide plus Hillel International total an estimated $190 million.

The $150 million campaign, which is slated to reach its goal by the end of next year, is aimed at supporting small Hillels as well as large ones that have sizable endowments and development departments. The fundraising will largely take place via local Hillels, 60 of which have signed up so far. Hillel International will provide resources to smaller Hillels that may not have their own fundraising professionals — including by making fundraising experts available and offering campaign management tools and research.

Donors who have made their names public include Rosalinde and Arthur Gilbert, who recently endowed the executive director positions at UC Berkeley and UCLA Hillels; actor Mayim Bialik and Julie Monkarsh Gadinsky, both of whom also donated to the UCLA chapter; Ricky and Melissa Sandler, who donated to the Wisconsin chapter; and Matthew Bronfman, the chair of Hillel International’s board of governors.

“We fully expect that there are going to be strong Hillels that will get stronger by virtue of their fundraising success,” Lehman said. “We are also, through our role at Hillel International, making sure that every Hillel, regardless of its current resources or current fundraising capacity, has both the opportunity to participate in the centennial campaign and the ability to grow through the campaign.”

One major development in campus Jewish life during recent decades is the rise of other national Jewish groups that have grown their presence at colleges and universities — particularly the Chabad Hasidic movement, which has established nearly 300 local chapters serving college students. Lehman paid tribute to an “open marketplace” on campus while insisting that Hillel remains the organization providing the greatest range of offerings to Jewish students.

Although some campus Chabads offer a broad range of programming and, at some schools, draw more students than Hillel, Lehman portrayed the network as primarily focused on Orthodox life. He also called Chabad “a partner on many campuses.”

“There are also some key organizations that have emerged in the kiruv [religious outreach] or Orthodox tradition space, Chabad being the most notable,” he said. “The presence of those groups is supporting certain students on certain campuses.”

Lehman trumpets programs and approaches pioneered by Hillel at large scale — from a get-out-the-vote campaign to hiring campus interns who work to engage students individually. But much of the focus devoted to Jewish campus life in recent decades has surrounded the rise of antisemitism and whether Jewish students, particularly those who are vocally pro-Israel, can feel comfortable at their schools.

Perhaps illustratively, a court battle is now underway after a student participating in a Students for Justice in Palestine protest outside the University of Illinois Hillel threw a rock toward a group of Jewish students. The student, who has since graduated, was charged with a hate crime in June.

For Lehman and Hillel more broadly, rising antisemitism, especially when it emanates from anti-Israel quarters, presents a twin challenge: First, how to create a safe haven for students without being alarmist, and second, how to do so without alienating the segment of Jewish students who aren’t Zionist.

For more than a decade, Hillel International’s “Standards of Partnership” have barred collaboration with groups that “delegitimize, demonize or apply a double standard to Israel”; deny its right “to exist as a Jewish and democratic state with secure and recognized borders”; support the boycott, divestment and sanctions, or BDS, movement against Israel; or foster a disruptive or uncivil atmosphere. Lehman maintains that individual anti-Zionist sudents are welcome at Hillel, even if their groups aren’t.

“We’re going to continue to do everything we can to create a welcoming space for every student, regardless of their political views or their other organizational affiliations,” Lehman said. “At the end of the day, we are a Jewish student organization that wants to ensure every Jewish student also has an opportunity to authentically engage with Israel in whatever ways that may take shape. As such we don’t want to create an environment where there is a level of demonization of Israel that we can’t fulfill that aspect of our mission.”

Another challenge for local Hillels is to offer students space and resources to fight antisemitism while not scaring away Jewish students who are reticent to get involved in a contentious debate.

The attention large nonprofits pay to campus antisemitism, Lehman said, can sometimes be counterproductive. He pointed in particular to a truck that drove through the University of California, Berkeley campus in October displaying an image of Adolf Hitler giving the Nazi salute, next to the text, “All in favor of banning Jews, raise your right hand.” That campaign, put on by the conservative media watchdog Accuracy in Media, was meant to protest a coalition of groups banning Zionist speakers. Lehman said, “That group thought they were making a point about the antisemitism represented at the campus. Instead we at Hillel received dozens of students who were traumatized by seeing the truck.”

“We believe it’s imperative that organizations that are not of campus, and on campus, don’t simply throw grenades and parachute in,” he said. “It ends up being counterproductive or even downright destructive to campus dynamics, to Jewish life and, in many cases, to even just the well-being of Jewish students.”

But beyond the challenge of antisemitism, Lehman said, Jewish students are facing other fundamental challenges to their campus wellbeing, including food insecurity. Lehman pointed to a Hillel program to provide mental health support and food assistance to students at the City University of New York, and said that making sure Jewish students of all kinds can live comfortable lives on campus is critical to getting them into their Hillel’s door.

“The Jewish community in North America is also experiencing, particularly for young people, unprecedented levels of food insecurity, of housing insecurity and of, just, overall economic challenge,” he said. “If a young person cannot put food on the table, then they’re not going to show up for jewish activities.”