Jewish theaters, and their challenges, take center stage at conference

How can theaters meet the mission of live performance when part of the audience can’t or doesn’t want to show up anymore? 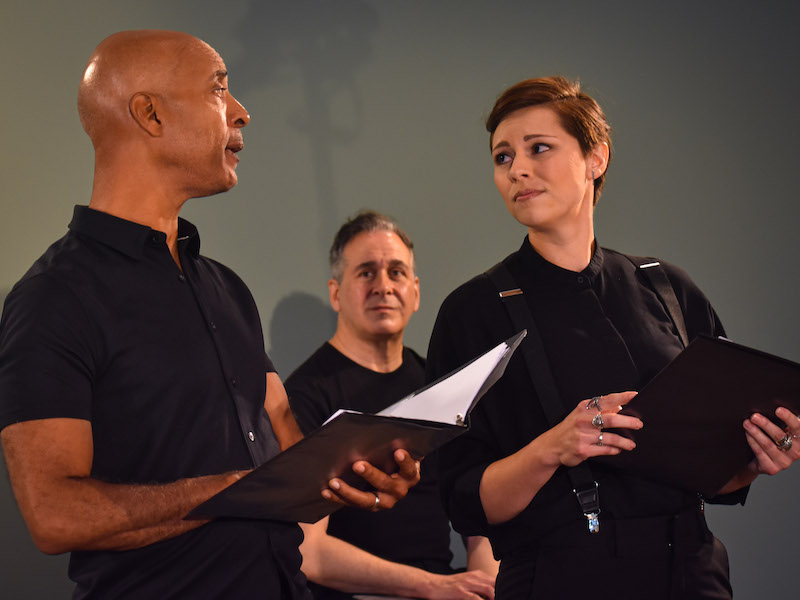 Actors in the show 'Out Loud' at The Braid, a Los Angeles-area Jewish theater, in June 2022.

From Broadway to regional playhouses, the theater industry is still having a tough time recovering from the closures and distancing measures of the pandemic. At a conference on Jewish theater this week, more than 100 attendees discussed those obstacles — along with the added challenges of how to tell authentic stories about Jews, market them to a much larger non-Jewish population and — of course — pay for it all.

“Ultimately we’re in [Jewish theater] for social change, to debunk the stereotypes of Jews and non-Jews [and let people] see themselves on stage and learn about all kinds of Jews, to expand the heart and mind in terms of what a Jew is and to create a legacy for future generations,”  Ronda Spinak, director of The Braid, a Jewish theater in Santa Monica, Calif., told eJewishPhilanthropy. “At the heart [of our work] is our mission, but what has changed is how we collect our revenues, which is important to sustain us over time.”

How to collect revenues was a topic of frequent discussion at the conference of the Alliance for Jewish Theatre, which was held Sunday and Monday and brought together more than 70 presenting artists from around the world. In a nod to the continuing impact of COVID-19, the conference was entirely virtual, and brought together playwrights, actors, member theaters and others who facilitate Jewish culture.

The conference confronted questions such as: How can theaters meet the mission of live performance when part of the audience can’t or doesn’t want to show up anymore? How do they market to audiences outside of the immediate Jewish community? How can they provide a space where everyone feels safe and comfortable?

“We truly want to be an actual resource, not just an idea of something that we do, but really a place that helps people in a practical way,” Willow Jade Norton, the alliance’s new executive director, told eJP.  “We came away seeing that our members need to be revived and have a renewed sense of culture and creativity.”

The Zoom-ification of gathering during the pandemic has changed the way theaters operate. Many have gone hybrid, and playwrights and actors have shifted their work accordingly.

“It’s been really challenging for them to get people back in the theater,” said Norton, who took over the leadership post in June. “People aren’t coming back after the pandemic, so [theaters] keep their pivot model in place, which was mostly remote programming.”

The Alliance for Jewish Theatre is a nonprofit made up of actors, writers, directors, producers, theaters, and other people connected to theater to promote theatrical endeavors by, for, and about the Jewish experience. The budget is approximately $75,000 a year, and the alliance has two part-time staff members: Norton and an administrative associate.

Until a few years ago, it was an all-volunteer group, but its funding has increased recently. A grant from Canvas, a Jewish culture field-building initiative supported by a range of major Jewish foundations, gave the alliance a grant of $25,000 that has enabled the organization to devote $7,000 to “regranting” — providing small grants to individual members and member theaters to develop new projects or address urgent needs. The rest of the funding went to the group’s Theatremachers program for innovative artists ages 18 to 36 — a mentorship program to develop the professional Jewish theater community — and to hire Norton, as well as other operating expenses.

Now the challenge is making this small corner of the theater industry sustainable. In a session titled “Playwriting Entrepreneurship,” a panel talked about the challenges of portraying Jewish stories throughout and after the pandemic, with the concept of gathering changed forever, for good and ill. While Zoom shows made theater more accessible to people with disabilities and in remote areas, it also fundamentally altered the concept of gathering, said Jessica Bauman — co-creator and co-director of a theater experience about life at the border between the U.S. and Mexico — who said the work of theater is now “all about reframing.”

“The lure of reaching a lot of people is not sustainable in this moment,” she told a breakout session of about 30 people. “What does it mean to be in a room with people, even if it’s small?”

Individual theaters have changed their productions in order to contend with the realities of the pandemic and its legacy. At Los Angeles’ theatre dybbuk, productions are created over the course of about three years and generally interpret an obscure or unusual Jewish text using various types of performance including choreographed movement. For example, an upcoming production interprets Shakespeare’s The Merchant of Venice, and three previous efforts featured a Jewish exorcism; an ancient and obscure liturgical text; and the story of Lilith, the biblical Adam’s apocryphal first wife. Now, the theater offers podcasts, as well as some virtual programming.

Since the onset of COVID-19, The Braid has created or recreated about 20 shows to be broadcast virtually. Spinak, who is on AJT’s board, told eJP that the narratives the theater features examine different facets of contemporary Jewish identity and experience, ranging from topics like family secrets or forgiveness to stories depicting the particular experiences of second generation Iranian-Jewish-Americans, or stories emerging from Holocaust-era violins that were restored and given to musicians all over the world to play.

During the pandemic and since, The Braid — which has eight part-time and full-time staff and an approximate annual budget of ??$625,000 — has pivoted to a hybrid model, reaching viewers in 47 U.S. states and Puerto Rico, as well as 47 countries, via nearly 200 partner organizations that have sponsored or hosted a show.

In addition to hosting shows on its own platform, the theater exports shows to other audiences virtually or in-person if preferred: providing show packages with marketing materials and a technical crew, as well as a member of The Braid leadership team as online or on-site host to introduce the show, provide context and moderate a post-show Q&A. And every time an author’s story is performed, Spinak said, the writers are paid a contracted-in-advance royalty, usually $150 for the first use and $10 each subsequent time the story is performed on stage or Zoom.

This model is like a “mini-studio,” Spinak said. “We have created content that we can sell,” she said. “We don’t own the stories but are licensing the stories from writers.”

A third of the revenue for The Braid is from ticket sales, Spinak said, adding that an additional third is from individual donations and the final third is from grants and foundation support. For instance, the Jewish Community Foundation of Los Angeles supported the creation of an arts council of millennial leaders in Los Angeles who were charged with developing a salon show focused on young adults, and the Ziering Foundation supported the creation of an archive at the theater for women rabbis.

In light of all of the recent changes, conference attendees said, this has been a hard time for the theater generally. Multinational playwright Andrea Stolowitz, who is based in Berlin and Portland, Ore., admitted difficulty in “how to meet this moment,” given her commitment to paying the artists she works with and with fewer grants and funding sources available, she told the entrepreneurs breakout group.

“My shift is to recognize that being in a room with an audience, even for a workshop or reading or any interaction or even on Zoom, the goal isn’t a production anymore,” she said, adding that “story-sharing impact and change comes from being in presence with each other.”

Moving forward, Norton said she wants to examine the metrics of success in Jewish theater without getting lost in the numbers when it comes to measuring impact.

“In reporting for grants and sharing for boards, it has to be about the numbers, and that’s important because how else are we measuring things?” she said. “Well, how people feel about their experiences is also really a value.”

Alongside the discussion of COVID-era challenges, the conference also delved into questions of Jewish identity. Some of the attendees asked questions like “Am I Jewish enough?” and “Is my art good enough to make a difference in the world?” Those questions reassure Norton that despite the complexities of the present moment, people still care about Jewish theater.

“Those questions are about investment. They’re invested in caring about making sure that they’re contributing to a better world, and that they are leaning into their culture,” she said. “So that nervousness and anxiety — ‘Is this enough?’ — that shows me that there’s skin in the game and that we’re going to be OK.”