“Hate doesn’t exist in a vacuum,” a voiceover during the campaign's “Saturday Night Live” PSA said. 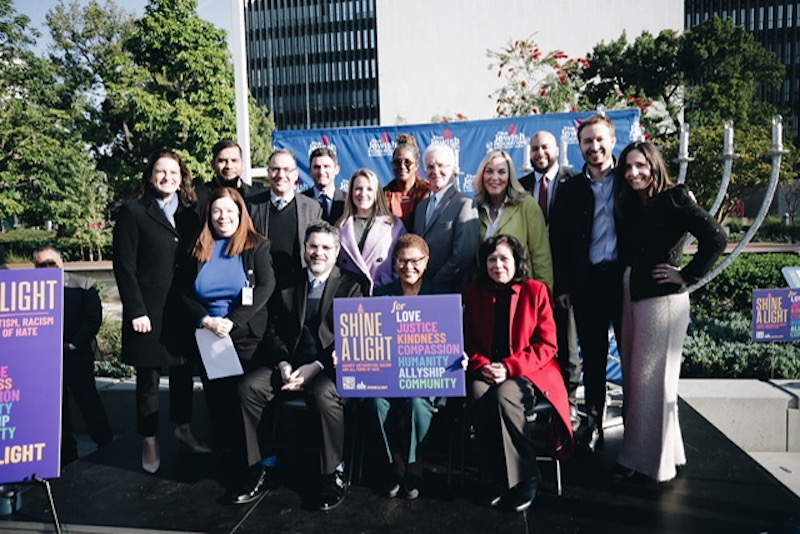 Rabbi Noah Farkas, president and CEO of the Jewish Federation of Greater Los Angeles, and L.A. Mayor Karen Bass (both seated, right and center) were among the leaders at Thursday's Shine A Light program.

An ad on “Saturday Night Live.” A rally in Times Square. A local campaign in Billings, Mont. A new version of a classic song, courtesy of iconic Israeli singer David Broza.

They’re all elements of Shine A Light, a convening platform for companies, nonprofit organizations, communities, elected officials and others to unite in amplifying awareness of antisemitism in all its forms. The campaign began earlier this year, is ramping up this week as Hanukkah begins, and runs through December 26, the holiday’s final day.

Shine A Light was spearheaded last year by the Kirsh Foundation, and is encouraging its coalition of North American Jewish and non-Jewish organizations and corporate partners to proclaim allyship with Jewish people, as well as with anyone who is targeted on the basis of their identity. It includes programs ranging from interfaith panel discussions and Shabbat programming to public menorah lightings, rallies, ad campaigns, the arts and social media posts. The campaign is timed to coincide with Hanukkah, a festival of lights that celebrates freedom.

According to a 2021 study by the American Jewish Committee, one out of four American Jews had been targeted by antisemitism over the previous year, and nearly four in ten reported changing their behavior for fear of being identified as Jewish. The Anti-Defamation League’s annual audit of antisemitism tallied a record 2,717 incidents across the United States in 2021.

Shine A Light’s annual budget of $3-4 million is funded by foundations including: the Adnim Foundation, Charles and Lynn Schusterman Family Philanthropies, the Jeffrey M. Talpins Foundation, The Kirsh Foundation and the The Paul E. Singer Foundation, as well as the UJA-Federation of New York. Some additional partners allocate their own internal resources and budget to create Shine A Light programs, while others apply for funding from a microgrant pool of $500,000, with individual grants ranging from $2,000 to $10,000.

Last year, Shine A Light had more than 100 corporate and organizational partners. This year, the total exceeds 200. Official Shine A Light-sponsored programming took place in 40 cities this year and last, not counting the organic grassroots programming that has sprung up, which Shine A Light has not been able to track.

Shine A Light’s media campaign included a 30-second public service announcement during a commercial break on this past week’s “Saturday Night Live.” A media push is launching in all 50 states, including print, broadcast and online media in spaces ranging from billboards to taxi banners to bus stop and checkout displays.

“Hate doesn’t exist in a vacuum,” a voiceover during the “Saturday Night Live” PSA said, with the corresponding text appearing on screen. “One form of hate leads to another. And there is one form of hatred on the rise in the U.S. often passed off as legitimate discourse or just ignored: antisemitism.”

On social media, Shine A Light is asking users to post an image that looks like a spotlight, along with with text calling out antisemitism. A variety of media partners, including Comcast, NBCUniversal, iHeart Media, the NBA and the NFL, have joined the campaign.

“We’re honored to return as a partner of the Shine A Light coalition and bring vital awareness to the dangers of antisemitism,” NFL Commissioner Roger Goodell said in a statement. “There is no place for antisemitism or hate of any kind in football, sports, or society, and we each must play a role to end it.”

Shine A Light has also enlisted social media influencers — including Australian actor and model Ruby Rose, Tony Award-nominated actor Rory O’Malley, actress and singer Alexa Swinton and more — to create content spotlighting antisemitism in society ,and has provided a social media tool kit to aid influencers in getting the message out.

“FOREVER and ever and ever,” Rose, who has more than 20 million followers, wrote alongside a post on Oct. 24. “There is NO EXCUSE FOR RACISM AND HATEFUL SPEECH. It is both inexcusable and dangerous.” The post read, in all capital letters, “I support my Jewish friends and the Jewish community, always and forever.”

Another online-centered element of the campaign is Shine A Light On Gaming, where  gamers hosted streams on the gaming platform Twitch over the past few months, with the goal of inspiring deeper discussions on antisemitism and the importance of community in making the gaming space a more welcoming environment.

According to the ADL, three out of five gamers aged 13 to 17 — a demographic representing nearly 14 million children — experienced harassment in online multiplayer games in the latter half of 2021. Reports about hate of all kinds surfacing during gaming and in online discussions have made gaming a ripe and growing area for antisemitism, as it has been in the past for other forms of bigotry and abuse.

On the musical front, Shine A Light is collaborating with legendary Israeli singer-songwriter David Broza to remake the popular Chanukah song “Light One Candle,” by the folk group Peter, Paul and Mary.

Offline, and away from screens, Shine A Light is manifesting through rallies and other activist initiatives nationwide. Yesterday morning in Los Angeles, as part of the program, the federation convened newly elected Mayor Karen Bass and other community and civic leaders at Grand Park overlooking City Hall to celebrate Hanukkah with a menorah lighting ceremony. Rabbi Noah Farkas, the Jewish Federation of Greater Los Angeles’ president and CEO, urged the crowd to “meet hatred head on with kindness and fellowship.”

The event also acknowledged other vulnerable minority communities in Los Angeles, such as the LGBTQ, African American, Asian American and Pacific Islander, Latino and Muslim populations. It was held in conjunction with more than 30 Jewish and non-Jewish partners, including synagogues and the nonprofits Jews Indigenous to the Middle East and North Africa and 30 Years After, an Iranian Jewish organization.

“True redemption as a city will only come when we realize that there is more that unites us than divides us,” Farkas told the crowd. “To be a Jew is to love life, to love our neighbors and to pursue a righteous path of liberty and justice for all. Today, we will Shine A Light to respond in solidarity to the dramatic rise of antisemitism, racism, and all forms of hate — because only in one positive voice are we all stronger.”

At Central Synagogue in New York City, Rabbi Angela Buchdahl is hosting an interfaith Shine A Light Shabbat today with Imam Abdullah Antepli, a Shalom Hartman Institute fellow on Jewish-Muslim relations, as well as other Christian and Muslim leaders. Shine A Light is also organizing national menorah lightings in Washington, D.C. on Sunday, and in New York City on Monday. A similar event happened earlier this month in Atlanta.

In Billings, Mont., on Sunday, the Billings Gazette will be reprinting a full-page ad that first ran in 1993 featuring a menorah, which the paper will then ask its readers to display in their windows as a sign of solidarity with the Jews in their community. Readers took the same action in 1993 after a series of antisemitic incidents. In Chattanooga, Tenn., the mayor’s office will declare Sunday annual Antisemitism Awareness Day, to take place on the first Sunday of Hanukkah each year. Billboards around the city will highlight antisemitism, and 10,000 cards will be distributed throughout Chattanooga to share resources on fighting antisemitism. In Bentonville, Ark., a Dec. 4 event in collaboration with the Walton Family Foundation focused on how different religious communities incorporate light into their traditions.

Shine a Light is active on a number of other fronts as well. The organization is distributing curricula, lesson plans, modules, articles, videos and other educational content about antisemitism, ranging from acts rooted in hatred to stereotypes and microaggressions. It is also asking its corporate partners to include resources on antisemitism in their trainings on diversity, equity, accessibility and inclusion, and is trying to advance legislation at multiple levels to combat antisemitism.

“This is a moment for us all to respond in a unified voice rooted in strength and peace,” said Randi Grossman, sister of Lori Gilbert-Kaye, who was killed in the 2019 synagogue shooting in Poway, Calif., speaking at the L.A. event. “Answering the call to this piercing moment certainly won’t be easy, but it is the most important, sacred and essential work most of us will ever undertake in our lifetimes.”