Millions of dollars are pouring into the region from Jewish groups that hope to provide relief during another painful chapter in Ukrainian history. 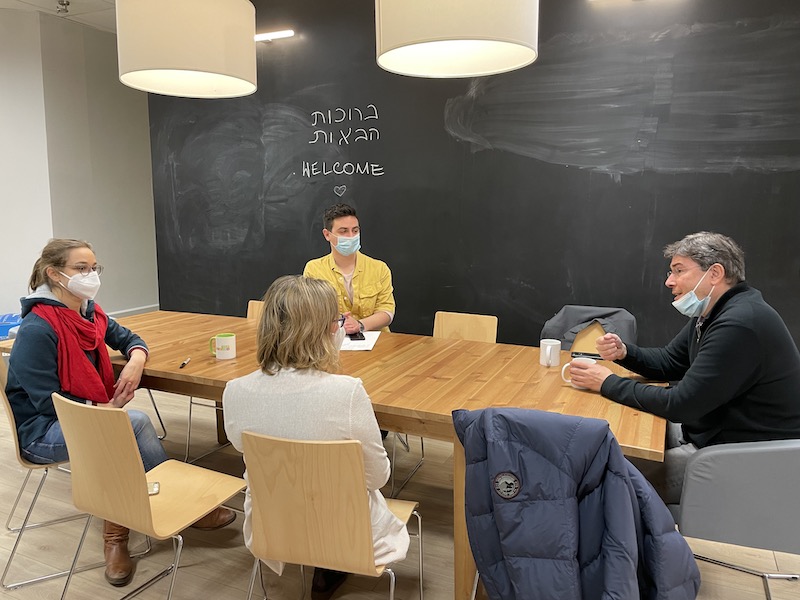 Eight years ago, Eric Goldstein traveled to Ukraine on a humanitarian mission during what felt, at the time, like a shocking geopolitical crisis that was destabilizing the country and its Jews.

During that trip, Goldstein encountered a Holocaust survivor who had to flee eastern Ukraine in the face of violence from Russian-backed separatists, seven decades after having fled the Nazis. Goldstein recalls the survivor saying, “I never thought I’d have to uproot again.”

Now, on his way back from a visit with refugee aid groups near the Ukrainian border, Goldstein, the CEO of UJA-Federation of New York, is watching similar scenes play out once more, during a broader and more sustai]ned attack on the country.

“There are people who are fleeing for their lives for a third time,” Goldstein told eJewishPhilanthropy in an interview en route to the Warsaw airport. “Ukraine, at least as of last week, had one of the largest Jewish communities in the world. The fact that this is happening in Ukraine to people who have known suffering many times before is so sad.”

UJA-Federation is one of a range of Jewish groups that have stepped up funding to aid organizations on the ground — including The Jewish Agency for Israel, the American Jewish Joint Distribution Committee and the International Fellowship of Christians and Jews (IFCJ). Jewish groups are providing aid to refugees, helping evacuate them out of Ukraine, giving them lodging and processing some for immigration to Israel as Russia’s invasion grinds into its second week.

Ukraine’s long, rich and often bloody Jewish history has come to the fore in the war’s first days. A bomb struck near the memorial to Babyn Yar, which commemorates the massacre of tens of thousands of Jews during the Holocaust, and there were also attacks at Uman, where a renowned Hasidic rabbi is buried. On Wednesday, Russian shelling destroyed the building housing the Hillel chapter in the city of Kharkiv.

Russian President Vladimir Putin has claimed that the invasion’s goal is to “denazify” Ukraine. Ukrainian President Volodymyr Zelensky, who is Jewish, appealed to global Jewry in a speech on Wednesday alluding to the country’s Jewish past.

“I am now addressing all the Jews of the world,” Zelensky said. “Don’t you see what is happening? That is why it is very important that millions of Jews around the world do not remain silent right now. Nazism is born in silence. So shout about the killing of civilians.”

Goldstein said Jewish groups have benefited from the decades they spent building communal infrastructure in Ukraine. So far, UJA-Federation has raised $5 million in aid for Ukraine, and plans to raise more. Overall, The Jewish Federations of North America have set a goal of raising $20 million, and announced Thursday that they had allocated the first $8 million in aid.

The Jewish Agency has raised $15 million for Ukrainian refugees and has a presence in the neighboring countries of Poland, Moldova, Romania and Hungary. It has rented thousands of beds for refugees and, along with IFCJ, has begun processing 700 Ukrainians for immigration to Israel; the first 200 arrived at Ben-Gurion Airport on Wednesday.

Natan, an Israeli disaster relief group, sent a team of doctors and nurses to the border, led by Dr. Dorit Nitzan, the former World Health Organization emergencies director in Europe. The team plans to deliver medical care and relief supplies to 500,000 refugees, in coordination with other groups. HIAS, the Jewish refugee aid group, is also assisting refugees in Poland.

“The situation is grave,” Nitzan said in a statement. “Many of the refugees are elderly, women and children. They are exhausted, sick, injured and traumatized.”

Goldstein is concerned that as the relief efforts continue, Jewish groups will overlap rather than complement each other. He suggested that groups could coordinate their work as they did in the United States at the onset of the pandemic, when a number of major foundations and organizations agreed to collectively distribute money to nonprofits in need. “People saw that you could leverage learning, you could leverage resources,” he said. “Since COVID, there was so much interconnectivity, and I think that can continue.”

He also worries that donors and supporters will stop focusing on the crisis even though, he says, aid is sure to be needed to repair civilian infrastructure when the fighting ends. He hopes that the roots so many American Jews have in Ukraine will encourage them to keep paying attention to the needs of refugees.

“Do people sometimes tire of crises and don’t sustain the effort? We’ve seen that too, but it’s too early to predict what is going to happen here,” he said. “The potential scale of the devastation is so great and so personal. So many of us — my family, my wife’s family are from this part of the world… so I think these stories deeply resonate with people.”

But he stressed that despite the crisis’ myriad Jewish connections, Jewish groups in the region should aim to help all those in need, not just Jews.

“This is much broader than a Jewish crisis,” he said. “I think we’re still in the very, very, very early stages of this. When, literally, the smoke clears, I think there’s going to need to be an assessment of just what are the greatest needs. Are people going to go back to Ukraine? Can they go back to Ukraine?”