In Akko and Lod, the Religious Zionists of America support physical and spiritual healing

The city needs more help than its volunteers can give, RZA says 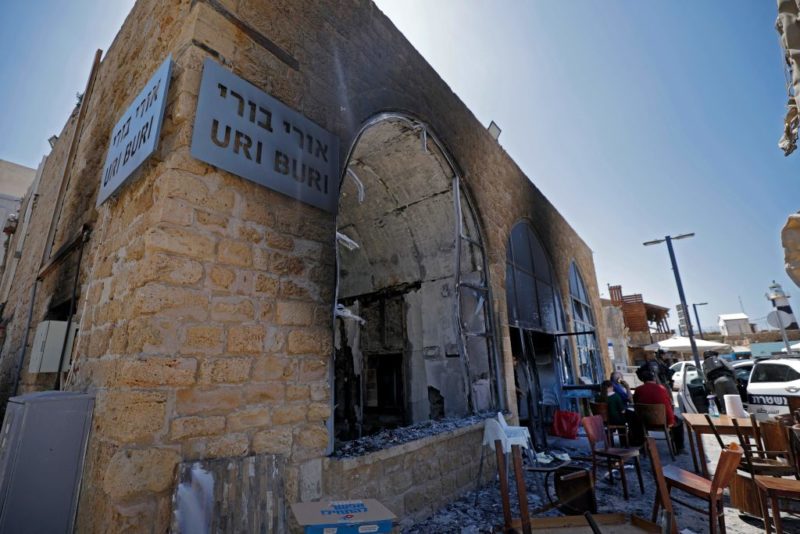 When members of a Religious Zionists of America (RZA) mission to Israel saw firsthand the damage in the mixed Jewish-Arab city of Lod in the wake of last May’s riots — overturned cars, a damaged synagogue and torched shops — they knew they had to act. Four months after their visit, through a series of initiatives, the RZA is working to heal the towns physically as well as spiritually, Rabbi Ari Rockoff, RZA’s executive vice president, told eJewishPhilanthropy’s Helen Chernikoff.

“Our mission is to make sure that Israel is always at the forefront of our minds,” he said. RZA had been so eager to return to Israel that when the government announced last April that it would again allow vaccinated tour groups into the country, the organization had already bought plane tickets, reserved lodging and set an itinerary for a late May visit. Participants were destined to wait a little while longer — the conflict between Israel and Hamas that started on May 11 forced them to postpone. The conflict also enlarged RZA’s purpose in making the trip, from solidarity to support, Rockoff said.

“Our goals changed. They shifted from making a journey home after almost two years of not being there, to actually doing something. So much had happened since we left,” Rockoff said. By “so much,” Rockoff meant not only the pandemic and the conflict but the accompanying riots in “mixed cities” — where Israeli Jews and Israeli Arabs live together — such as Lod and Akko.

The riots started before the conflict, and intensified during the 11 days of fighting. Akko, a city of about 55,000 people north of Haifa on the Mediterranean coast, sustained damage to cars, police stations and a synagogue during the riots. Shops, synagogues and cars were torched in Lod, southeast of Tel Aviv, which has a population of about 75,000.

Lod was the first stop on RZA’s 25-person, six-day trip, which started July 1, and Akko the second, Rockoff said. Their response was a fundraising campaign, to which 20 affiliated synagogues contributed. The effort raised $115,000, which RZA donated to efforts to rebuild and refurbish Lod’s central synagogue and to support healing initiatives such as communal Shabbat meals and counseling.

Now RZA is more than doubling its fundraising goal to $250,000 and targeting participation by 100 synagogues in order to fund a more systematic therapeutic response in Akko in the form of a professionally trained pastoral network.

RZA’s effort emerged out of its connection with Garin Torani, or Torah Nucleus, a religious Zionist movement formed in the late 1960s to encourage settlement in communities with a low religious population. The movement has pursued settlement in the West Bank, and more recently worked to boost the religious Jewish presence in mixed cities, including Lod and Akko.

In cooperation with Garin Torani, RZA is sponsoring the hiring, by Nov. 23, of 10 couples to serve as spiritual and psychological supports to the community. Many of the men already have rabbinic ordination, but they will undergo further training and receive mentoring and payment for the services they will provide. Some of them are already functioning this way on a voluntary basis.

“Our goal is over the next couple of years to help revitalize these religious communities by hiring many of those who previously volunteered for similar roles, allowing them to devote more time to their communities,” said Rabbanit Adi Samson, director of Aseh Lecha Rav, which trains community rabbis and is screening and training the couples. The group’s name is a reference to the Biblical exhortation that everyone should find a teacher.

Several American Jewish groups are at work trying to help the residents of Lod, Akko and other cities. The American Jewish Joint Distribution Committee launched its own fundraising effort among Israelis in June to fund the restoration of public spaces, such as parks, in Lod, Akko and Ramla. The San Diego-based Leichtag Foundation is known for its longstanding coexistence efforts. Before the coronavirus and the violence in May, the Social Venture Fund for Jewish-Arab Equality and Shared Society (SVF) was studying mixed cities’ demographics, governance and intergroup relations in order to inform its funding strategies, said Josh Arnow and Alan Divack, co-chairs of the fund, in a statement. The fund is a collaborative supported by the Jewish Funders Network that includes individuals, grantmaking organizations such as the Alan B. Slifka Foundation and several federations. SVF has also increased its funding of grassroots initiatives that engage Jewish and Arab residents.

RZA is considering transplanting the project to Lod next year, Rockoff said.

“We are calling on our communities in the diaspora to strengthen the Jewish communities of Lod and Akko by providing them with the resources they require to successfully grow back stronger,” Rockoff said.