At its annual conference, JFN will try to host the ‘hallway chatter’ online 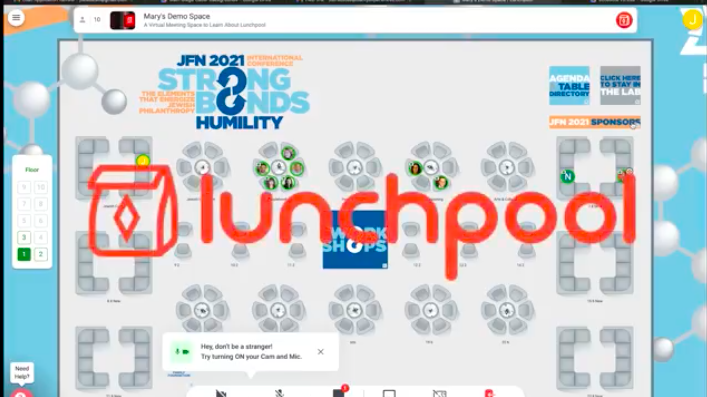 A year ago, the pandemic forced the Jewish Funders Network (JFN) to cancel its annual conference, and soon after that, the group started working on this year’s, which kicks off on Monday. One of the biggest services JFN, a membership organization open to individuals or foundations that donate at least $25,000 annually in the name of Jewish values, offers is access to expertise in funding areas like the arts and the environment. The organization moved that online easily, in the form of webinars, but the part of its mission served by the conference — the development of relationships — would be more of a challenge.

“What’s hard to replicate online is not the content, but the fact of everyone being in the same place at the same time,” David Ezer, JFN’s vice president of programs, told eJewishPhilanthropy. He knows that even after months of reflection and investment in an online platform designed to facilitate interaction, the conference might not fully succeed in turning attendees’ laptops and phones into the fabled hallways where introductions were made, ideas were pitched and deals were sometimes struck. He has lots of company in this quest; it’s part of what’s fueling the widespread popularity of Clubhouse, the informal audio-only app. Yet no interactive platform has enjoyed similar breakout success.

“We have surveyed audiences about what they want from a virtual platform, and the things that surface to the top are networking and alternative programming,” meeting planner Marti Balcom, who isn’t working on the JFN conference this year but has in the past. “And then after the event, when you look at the analytics, those are things they don’t go to. They’re going to see what their kids are doing. They’re doing the laundry, taking out the dog.”

This conference is the 15th Ezer has planned for JFN; some 650 people will attend, up from  582 in 2019, paying a fee of $360 for members, just a fraction of the  $1,099 for the last live conference. The effort involved months of research into interactive platforms, which have been proliferating since the early days of the pandemic, said Balcom, who started working on the JFN conference in 2010, but wasn’t involved this year, as JFN handled it entirely in-house.

In July, Ezer and his colleagues selected the Lunchpool platform to encourage interaction, and decided to use Zoom as well, for talks and workshops. Lunchpool’s core technology is a “lunchroom” that offers both small conversations — the number of participants at each table is capped — and the ability to “move” from table to table. JFN considered and rejected Gather.town, a platform that simulates various settings, including a conference hall, as fun but unnecessarily complicated. The entire conference will be accessed through the Lunchpool login, Ezer said, which will actually make security tighter than in years when uninvited people could still approach members in the hotel lobby. He doesn’t expect JFN members to share their logins, he said.

To further encourage conversation, every participant is assigned to a “Family Group” of about 15 people, which will meet each day for facilitated dialogue on the program. The facilitators received training, both in how to guide a conversation, and in how to use the technology. There will also be a help desk available, Ezer said. Alan S. Divack, a program director at the Lucius N. Littauer Foundation, will be running one of the family groups. He knows it will be difficult, but also thinks that JFN conference participants are always motivated to connect with each other, especially after a year online. “That’s what this conference is,” Ezer  said. “It’s content delivery as a vehicle for establishing personal connections. Any conference is like that, but especially JFN.”

Each day is a mixture of scheduled networking; interactive workshops focused on philanthropic skills, such as one about bad grantmaking practices; family group meetings and sessions built around issue areas. There are only three conventional lectures, including a closing talk by JFN CEO Andres Spokoiny. Attendees are also free to pop into Lunchpool between or during other sessions, Ezer said.

The conference’s themes are resilience, humility and community, according to the agenda. On Tuesday, for example, a session under the heading of humility hosted by the JFN group that works on the issue of Jewish Poverty will lead participants in playing “Broke: The Game,” created by Dana Gold, the chief operating officer of the Jewish Family and Community Services in Pittsburgh, to simulate the kinds of choices people in poverty must make.

This conference will likely be the only one that emphasizes interaction to such a degree, said Ezer, despite the fact that JFN’s members have consumed at least three times as much online content this year than ever before. Next year, if the pandemic continues to ease and  in-person gatherings resume, JFN will probably include more issue-related sessions, in the mode of a typical conference. “When we’re live, the members will be interested to speak again about what they’re interested in, and also, there will be much more time to accommodate more sessions,” he said. “There will be live event programming 10 or 11 hours a day.”

Balcom said she’s seeing business start to pick up as vaccine distribution spreads, with clients committing to smaller-than-normal meetings in the fall, and talking about a return to both big annual gatherings and smaller regional ones in 2022.

“People miss each other,” Balcom said.

The startup Seder is on Zoom

Can Mussar help us repair the world?

Jewish Education can restore and rejuvenate our world

Clubhouse & Career Up Now…Innovating a new innovation…and so can you!