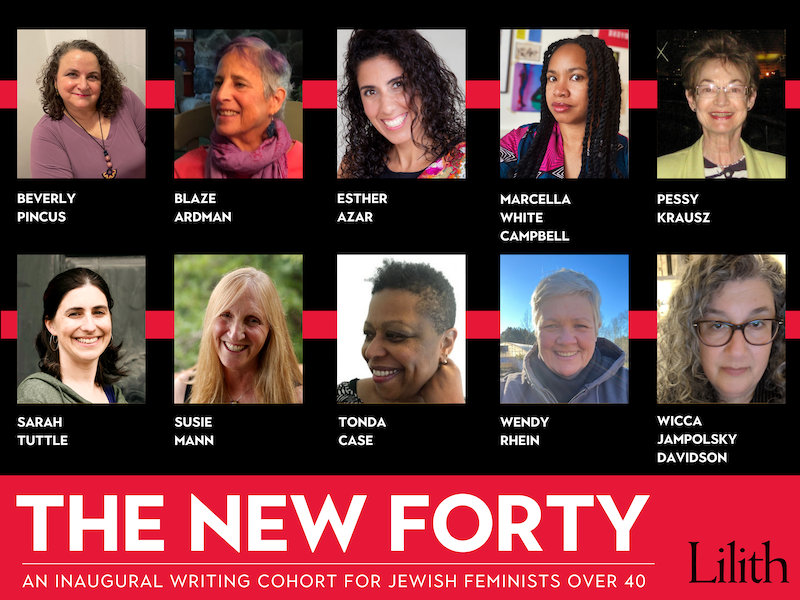 Forbes celebrates 30 entrepreneurs under 30. The New York Jewish Week lauds 36 Jewish innovators under 36. But a new list, from the feminist Jewish magazine Lilith, conveys the message that creative spirit, innovative instinct and professional achievement, for most, do not end or stop being noteworthy at 40.

“The New 40,” a project from the magazine announced last year that is specifically geared toward emerging women writers over 40, drew 269 applicants, 10 of whom were selected.

“Quite clearly we had tapped into a huge need,” Susan Weidman Schneider, Lilith’s editor-in-chief and one of the magazine’s founders, told eJewishPhilanthropy. The members of the first cohort, which began meeting in February, range in age from 43 to 87 and hail from all over the United States, with one member in Israel.

Weidman Schneider said that the magazine sought voices that hadn’t been widely heard or included, with a particular interest in nonbinary writers and those with diverse racial identities and disabilities. Lilith hopes for each of the cohort members to have a piece of writing appear in the 46-year-old magazine, either on the blog or in print. They will be paid the same rate as the magazine’s other writers for their pieces.

Weidman Schneider was surprised by how modest applicants were about their prior writing achievements.

Cohort member Marcella White Campbell, for example, had written copy, social media posts and op-eds on behalf of organizations like Be’chol Lashon, a Jewish nonprofit advocating for Jews of color, where she was previously executive director. She said she had gotten used to writing in the organizations’ voices — not her own.

“Now that I have the opportunity to write for myself, I’ve found that I am no longer used to writing without instinctively self-editing,” White Campbell, one of two Black writers in the cohort. “There is a disconnect between what I think and what I write. I believe I have a perspective worth sharing and a voice worth hearing — one that hasn’t been heard for a long time. And this new voice is by definition an emerging voice.”

Weidman Schneider called the process of reading applications “exciting and overwhelming,” adding that applicants who were rejected “showed appreciation for being valued. Everyone who wasn’t selected, we invited them to pitch us with stories, [telling them], ‘We’re interested in working with you, knowing you, and what you want to write about.’”

Cohort sessions will provide coaching, mentoring and opportunities to hone writing skills, but Weidman Schneider said that what cohort members were yearning for was community.

“It was clear the members of the cohort were totally crazy about one another,” Weidman Schneider said, adding that the group has a text thread, and that “they’re in touch with each other a lot.”

Support for this program comes from an unnamed fiction writer, playwright and screenwriter who told Weidman Schneider that it’s challenging for women no longer considered “young writers” to move their work forward. Weidman Schneider said she realized that Lilith is a publication that could support older writers, and that the magazine “was able to turn this author’s concern into a project that would open doors to women.” The donor’s support will pay for facilitators, mentors, the program’s selection committee, and time spent by the staff selecting the cohort, editing submissions, preparing the works for publication and promoting them after they run.

Beverly Pincus, a cohort member who lives in New York City’s Riverdale neighborhood, said she’s been writing her entire life but never published anything because the process felt intimidating. “My writing is so personal it feels scary,” she said. When the Lilith opportunity emerged, she added, “I felt like I was finally ready to come out with some of the aspects of my life.” Pincus, who has been a psychologist for 30 years and intends to work on a memoir, is Latina and Jewish —her mother is from Colombia— and said she appreciates the program’s emphasis on diversity.

Pincus feels there are a lot of programs for Jews in their 20s and 30s, for men and for women with families, but not for older women, especially if, like her, they don’t have families.

“I have often felt very invisible in the Jewish community and it’s sad,” said Pincus, who is divorced. “There has been a tradition of elders telling their stories that went away; now it’s ‘let’s hear from all the young people’… It’s visionary to make a program that supports the voices of older Jewish women… They’ve tapped into a demographic that isn’t being heard that much.”

The group has met twice so far. The oldest member of the group, Pessy Krausz, is a great-grandmother who lives in Jerusalem, and remembers fleeing the Nazis with her family.

The program is starting by helping cohort members begin a regular writing practice in order to get in touch with their creativity. Over the summer, they will take what Lillith’s director of communications events & strategic partnerships Rebecca Katz called “a time of pause, whatever that means to them,” and resume in the fall to identify the pieces they want to develop for editing, feedback and publication. The hope is that all of the writers become ongoing contributors to Lilith, Katz said.

“What’s so brilliant about this program is that we’ll have the opportunity to cycle through many writing genres,” said White Campbell, who is interested in exploring autobiography and essay writing, as well as science fiction. “I have seen Afrofuturists dream a Black future, but I don’t think I’ve ever seen anyone dream an explicitly Black and Jewish future,” she said.

Lilith recently received funding from the Safety, Respect, Equity Network, a group that combats gender-based harassment and inequity in Jewish workplaces and communal spaces, to start another cohort program, called, “Here We Are: Personal stories of gender and injustice.” That program will provide writing opportunities for women and non-binary people who have experienced sexual-based discrimination or gender-based violence firsthand in the Jewish world.

In the second year of that program, Lilith plans to publish investigative and analytical reports looking at Jewish institutions through the lens of these personal stories, to help create more equitable opportunities for women in Jewish spaces and to help shape safer workplaces, schools, camps, congregations and more, Weidman Schneider said. Participants will also be asked to share stories about the organizations’ reactions to learning about their experiences with misconduct, and will be given training to prepare themselves for the possibility of communal blowback after those pieces are published.

Katz, who interned at Lilith when she was 18, started cartooning for them at 28 and joined the staff two years ago, understands the need to create a space for older writers.

“A lot of people who had put writing aside for personal and systemic reasons had the time or critical need to return to it,” Katz said, adding that many applicants named the pandemic as a factor in their decision to apply. “There’s such pressure to reach the peak of creativity and productivity at a young age, but why wouldn’t your thoughtfulness, creativity and insight grow deeper as you live more years? And why wouldn’t [aging] allow you to try different and new things?”