After documenting past N.Y. synagogues, a student is setting her sights on former synagogues out west. 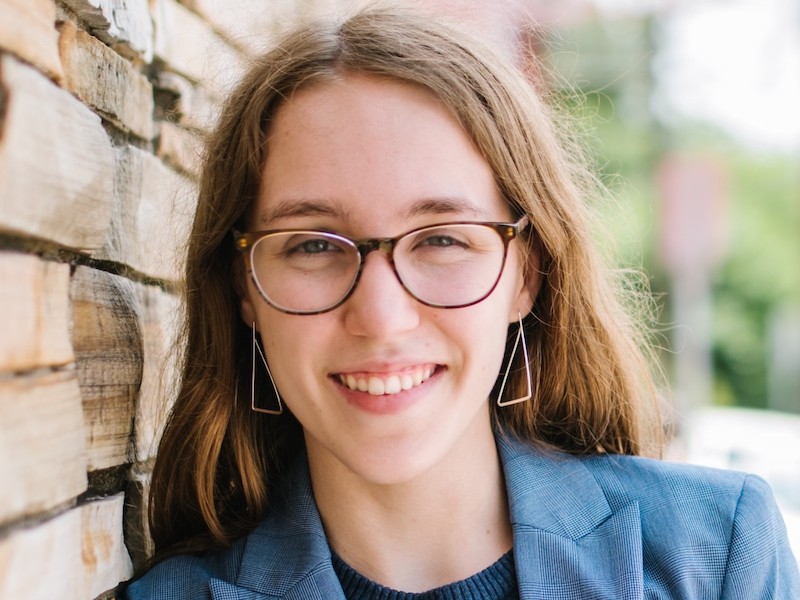 For a little more than a year beginning in February 2021, a Twitter feed offered a window into New York City Jewish history and captivated a small slice of Jewish users: @OldShulSpots.

The account, a bot also titled “This Used to Be a Synagogue,” posted the photos, locations and congregational names of more than 1,000 buildings that were once synagogues in Manhattan. Last month, after accruing media interest and more than 1,300 followers, it finally ran out of old shuls to catalog.

But that doesn’t mean its creator, a non-Jewish college student in Texas named Amy Shreeve, is done listing erstwhile synagogues. Soon, she plans to embark on the same project in a new, vast location: the American West at the turn of the 20th century.

“Jewish life in the Eastern United States is important, but it gets talked about a lot,” Shreeve told eJewishPhilanthropy. “And it’s interesting to bring stories of American Jewry to light that don’t get talked about.”

Shreeve, a junior, majors in history as well as rhetoric and writing at the University of Texas at Austin, and came up with the idea for the feed in a class called History and Data Tools. Though she doesn’t have a Jewish background, she had always been fascinated by the “rich history” of Yiddish, and studying the language exposed her to the Jewish history of 20th-century New York. For her history and data tools final, she combined her newfound interests in computer science and Yiddish by using data from Manhattan’s Center for Jewish History on historical synagogues to write a 20-page paper that, after class ended, turned into the Twitter bot.

“I ultimately did it for fun to test out my computer skills,” Shreeve told eJP. She was inspired by “other similar bots that don’t pertain to synagogues in particular,” like @everylotnyc, a Twitter bot that posts every single building lot in a particular city. Shreeve’s bot is narrower in scope, and focuses on the Jewish history of each lot, not just its current occupancy.

Shreeve didn’t know what, if anything, would come of the endeavor.

“There were two initial ideas of where this would go,” she said. “In the first [idea], nobody would follow it except for my friends… I had hoped that some people might find it, find that it resonated with them.” Shreeve laughed, “Obviously, that’s more of what happened.”

She credits an article that appeared last year in The New York Jewish Week for drumming up interest. After the piece appeared, she said, not only did the bot gain more followers but she also received messages from people who connected with the history behind the addresses. Some reached out to tell her about synagogues the bot had posted. Others would send poems or short stories about their childhoods at the addresses in the feed.

The article and bot also led to her meeting Rabbi Dovid Krautwirth, who had already been working to photograph historical lots where synagogues stood in the 1950s. In January, Shreeve flew out to Scranton, Pa., to meet him and digitize the photos, to which they are now writing captions. They would like to find an archive or publisher willing to house them.

Meeting the rabbi, “someone with a really similar hobby to mine,” Shreeve said, “was really exciting.”

On March 3, the Manhattan list was finally exhausted. In honor of the occasion, she wrote on Twitter, “After a year of posting, I have run out of Manhattan synagogues! Don’t worry — I plan on expanding out to other areas in the near future. If you have a place in mind (or a preexisting list of synagogues) let me know!”

Commenters suggested everywhere from the Bronx to Detroit, but Shreeve, who’s from Austin, was taken by the idea of going west. She’s planning to use the American Jewish Yearbook for her new project. Through her research thus far, she’s discovered that many historical synagogues in the West have been abandoned or repurposed, with the current occupants not aware of the building’s Jewish history.

“It’s a way to uncover a past with unique layers,” she said.

Shreeve’s Western bot will look at synagogues in states throughout the West, including the former Temple B’nai Jeshurun in Leavenworth, Kan., which was the first synagogue in Kansas and is now home to private residences; Congregation B’nai Isaac in Aberdeen, S.D.,

which was originally a church and has existed as a synagogue for more than 100 years; and

Congregation Anshei Israel in Tucson, Ariz., which owned a Jewish cemetery in a town near the Mexican border that was once home to pioneer Jews.

Shreeve has also applied her talents to non-Jewish digital history projects. One that she features on her personal website, Austin Historical Snapchat Filters, focuses on former Black community sites and allows people on that social media app to see the way buildings in Austin looked more than a century ago.

“Really, I want people to stop in their walks to the bus stop, to the coffee shop, to wherever they’re going and think: what used to be here? Who used to be here?” she wrote on the site.

“Hopefully, this filter allows people to see that 130 years ago, there were different people here. Hopefully, people will begin to wonder: where did they go?”

Ultimately, Shreeve hopes to work in the growing field of digital public history, helping people find and understand the history of cities. She wants people to reckon with the past and hold cities accountable for their choices, as well as learn more about their culture and families.

“Internet history has a funny way of finding you,” she said, “helping history find the people who it resonates with.”