Inside two delegations of Jewish leaders heading to the Ukrainian border

The two trips — one of rabbis, the other of federation lay-leaders and professionals —have similar itineraries and aim to keep the Ukraine crisis on the Jewish communal radar. 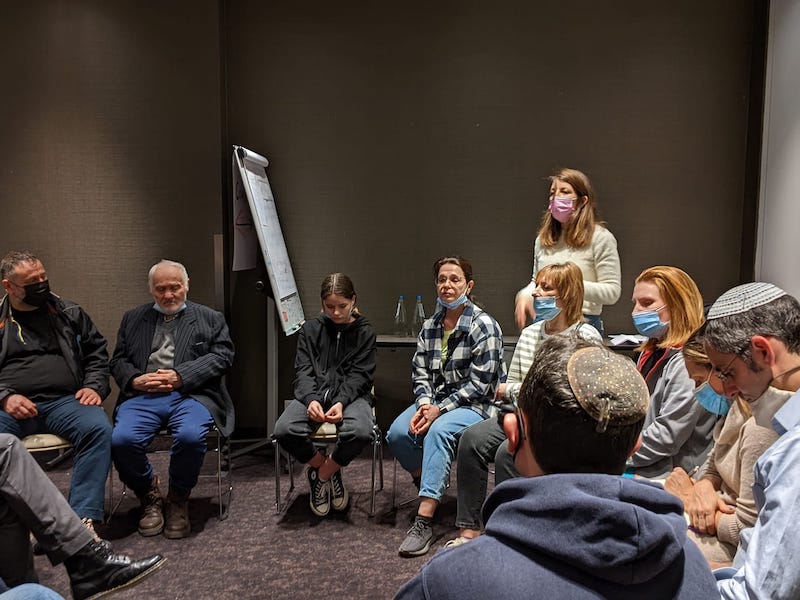 Rabbis on a UJA-Federation of New York trip meet with Ukrainian refugees in Warsaw on Sunday, March 13.

Near the end of the first day of a packed and emotionally withering trip to the border of Ukraine and Poland, the moment that stuck with Rabbi Menachem Creditor was when he saw a refugee’s shoes.

Creditor and a delegation of 18 other rabbis from the New York City area had, on Sunday, been sitting with refugees in a circle of chairs in what appeared to be a drab conference room at the Novotel Warszawa Centrum, a central Warsaw hotel that has, during the past few weeks, housed refugees fleeing the war in Ukraine. Creditor was talking with a woman who fled with her 14-year-old daughter when he realized that the girl had the same shoes — black Converse sneakers — as his own daughter of the same age.

“It broke me on the inside, to see our children, our child, my child, in such a vulnerable state,” Creditor told eJewishPhilanthropy. The shoes, he said, were “all I could notice.”

Bearing witness to such moments, which Creditor called “heartbreaking and inspiring at the same time,” is one of the goals of a pair of Jewish solidarity and aid missions that departed the United States this weekend for the Ukrainian border. Creditor is on a delegation run by the UJA-Federation of New York, where he serves as scholar-in-residence. That trip left Saturday night and will fly back Tuesday. Another delegation of 24 lay leaders and professionals from 11 communities, organized by The Jewish Federations of North America (JFNA), left Sunday night and returns on Wednesday.

The rabbis each brought duffel bags full of medical supplies and other humanitarian aid to the refugees. Beyond that, both trips aim to give participants firsthand knowledge of conditions on the ground, and how the federations’ grantees are helping — information participants are expected to relay to their communities to encourage further giving. Across North America, Jewish federations have raised more than $25 million, including $5 million from the New York federation.

“We’re also going to witness the massive crisis this is, to see the human faces, to hear the stories, so that we can bring that back to our communities, so we can keep people’s attention on this tragedy that is happening in front of our eyes,” Timoner added.

The two trips have similar itineraries: meeting with Jewish leaders and organizations, seeing work on the border, meeting Ukrainians preparing to immigrate to Israel, going to Yeshivat Chochmei Lubin, formerly a prominent yeshiva that is now an aid center for Jewish refugees run by the American Jewish Joint Distribution Committee (JDC).

Mark Wilf, who chairs JFNA and is leading its delegation, said that one of the mission’s goals is to assess where aid is most needed as JFNA prepares to continue supporting organizations on the border over the coming months. The organization is focusing its support on three organizations: JDC, The Jewish Agency for Israel and World ORT, an educational organization.

“We anticipate this to be a long-term issue, not for the short term,” Wilf told eJP. “As far as the worldwide Jewish community, we will take care of Jews wherever they are and whatever the needs are.” He added that JFNA would continue to lend support for ameliorating the broader humanitarian crisis as well, in which “the needs are almost endless in terms of the crisis and the pain and suffering involved.”

Part of the reason Jewish aid agencies have been so active on the Ukrainian border stems from their long presence in the region, dating back a half-century to the movement to free Soviet Jewry, and before that to aid Holocaust survivors, if not further in the past. Trip participants said Ukraine’s rich and often traumatic Jewish history was on their minds as they began their journeys, especially as some participants had roots in the region.

“My parents are Holocaust survivors,” Wilf said. “My mother was born in Lviv, which is now in Ukraine, and out of 180,000 Jews in that city at that point she was one of a handful to survive. There was no one 80 years ago to look [out] for her, my grandmother, my uncle, my grandfather and my father. There was no one there for them. There was no Israel, there was no wherewithal for the community to respond as it does today.”

But notwithstanding the sight of Jews flying to Eastern Europe with suitcases full of supplies, the participants said these trips are different from missions decades ago to aid Jews in the Soviet Union — as well as solidarity missions to Israel during wartime — because in this case the aid is not just going to Jews.

“Jewish history has been replete with examples of Jewish displacement and vulnerability,” Creditor said. “The big difference in this moment is the state of Israel and the strength of the global Jewish community marshaling all of its strength to support human beings. There’s no way our ancestors could have ever assumed that a Jewish president of Ukraine would be a global model of heroism and that the Polish Jewish community would be the vital support center for refugees seeking asylum from Ukraine.”

Trip participants did not tell eJP that they were worried about their physical security, even as Russia began bombing western Ukraine in recent days, bombing a Ukrainian military base on Sunday that’s just 11 miles from the Polish border. But they did say they expected the trip to be difficult nonetheless.

“I’m grateful for this opportunity but I’m also dreading it,” Timoner said on Saturday as she waited for the flight out of New York. “I know that we’re going to see a scale of human misery that — my heart is just going to shatter. And I’m expecting to come back crushed.”