Inside the antisemitic myth that won’t die 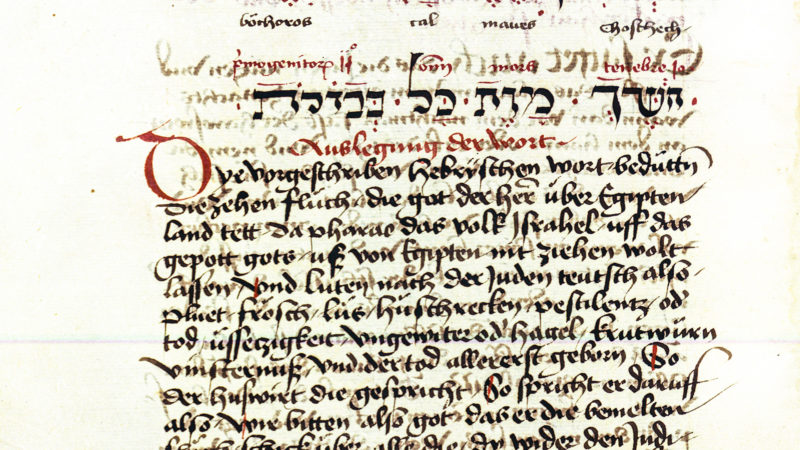 The gory, demonizing blood libel myth has trailed Jews, like a scarlet stain, for a thousand years. From medieval Europe to Bernard Malamud’s 1966 Pulitzer Prize-winning novel The Fixer, which is set in czarist Russia and redeems the wrongly imprisoned Mendel Beilis, to the antisemitic fantasies of QAnon, the gruesome lie has proved unkillable.

Now, the manuscript of the first recorded blood libel, which dates to 15th century Italy, is being spotlighted this week as part of a year-long digital exhibit that began in January at the Leo Baeck Institute in Manhattan titled “The Shared History Project.”

The blood libel canard, with its twisted religious symbolism, goes like this:

An innocent child is discovered dead and there are claims he was kidnapped, abused and ritually sacrificed by Jews who cut his throat and used his blood to make matzah for Passover. Known as the blood libel, it then touches off the persecution and slaughter of the community’s Jews.

One of the most notorious and best-documented blood libels occurred in 1475 when a 2-year-old Christian boy named Simon disappeared in the city of Trent, in what is now Italy. His body was found three days later on Easter Sunday in a canal flowing beneath the home of Samuel, a Jewish moneylender. A cook in the household reportedly discovered the body; historians believe it had been planted there. Samuel reported the discovery, touching off rancor against the small Jewish community.

During the next several months, male members of the Jewish community were arrested and tortured, forced to falsely confess that they had murdered the child to use his blood to make matzah. In the end, it is believed that Samuel was among 15 Jewish men who were tried, convicted and burned at the stake. In addition, it is believed that other Jews were also killed, perhaps all the men in the entire Jewish community.

The record of that 1475 blood libel, known as the Trent Manuscript,  details the trials of the community’s Jewish men from 1475 to 1478. The manuscript is in German with some Hebrew interspersed throughout. It is  614 pages and measures 12 ¼-by- 8 ½ inches. The text is in red and black ink with colored initials; a vellum binding was added in 1615. There is an initial on page 36 in the section covering interrogations of Samuel under the subheading “Hienach saget er wie sie kindlein gemartert haben” (Afterwards he says how they martyred the child).

The manuscript was bought for $176,000 at Sotheby’s in December 1987 by Ludwig and Erica Jesselson, who subsequently donated it to the Yeshiva University Museum in Manhattan. The digital copy used in this exhibit is one of 58 objects being spotlighted to tell the story of Jewish life in German-speaking lands over the last 1,700 years.

Although the Leo Baeck Institute contains four million objects that have all been digitized, the year-long exhibit has drawn upon digital artifacts from 40 other institutions around the world, according to William Weitzer, its executive director. He said this digital exhibit is one way for the institute to “curate our materials for the world to see.” (The LBI, part of the Center for Jewish History in Manhattan, is still closed for in-person viewing because of the pandemic.)

Magda Teter, a professor of history and the Shvidler Chair of Judaic Studies at Fordham University, noted in an essay written for the exhibit that the events at Trent “were not the first, nor the last trial of Jews accused of killing a Christian child. These accusations emerged in the Middle Ages, at first in England in the 12th century as stories of Jews’ crucifying a Christian boy in reenactment of Jesus’ passion. Then, on the continent, in the 13th century, as blood libels, claiming that Jews murdered Christian children to obtain their blood. When the blood motif was added, the highest Christian authorities – the emperor and the pope – defended Jews by asserting unequivocally that no rituals or practices of Jews required Christian blood and condemning the accusers. [However] these high-profile interventions did not stop anti-Jewish libels ….”

Teter, the author of last year’s Blood Libel: On the Trail of an Antisemitic Myth, noted that the trial in Trent ended with the destruction of its “tiny Jewish community and the creation of a cult of the Little Simon.” She said it “had a long-term impact on Jewish history, Catholic history and canon law, and the history of anti-Semitism. Its reverberations are still felt today.”

For instance, she told eJewishPhilanthropy, the gunman who killed one woman and injured three others in the Chabad of Poway synagogue in California on Passover 2019 “explicitly evoked Simon of Trent as one of the reasons for his attack on the synagogue.” And she noted that “the conspiracies of QAnon allude indirectly to this antisemitic myth… A conspiracy about ‘a Satan-worshipping cabal’ which kidnaps children is part of QAnon lies. They may not directly invoke blood libel proper, but they build on the tropes that emerged from the blood libel accusations.”

Weitzer pointed out that a key reason the Simon of Trent blood libel gained such notoriety is because it occurred not long after the invention of the printing press, which allowed broad dissemination of the trials’ proceedings. As Teter noted in her essay, “the flood of publications about the events in Trent for the first time visually and textually made the medieval tale of ‘Jewish murders of Christian children’ imaginable, influencing visual representations and anti-Jewish trials across Europe for centuries to come.”

Weitzer said the printing press allowed news of the trials to spread to a degree that “would not have been possible without it. … New technology brings both the good and the not so good. The radio, for instance, was used in Germany as a tool of the Nazis and Hitler. FDR [Franklin Delano Roosevelt] used it for his fireside chats. And now the internet allows QAnon to spread and is an important tool in how fake news can spread.”

A spokesman for the Leo Baeck Institute pointed out that no museum or archive would ever be able to collect and present at the same time all 58 items that have been digitized for the exhibit. In some instances, he said, the institute sent its own photographers to “capture the items in a fresh way,” in some cases even creating 3D renderings to help bring them to life.

Among the other 58 objects in the exhibit is one that came from the Vatican. Spotlighted the first week of January, it is an edict from the emperor Constantine of Rome in the year 321 AD that permits the Jews of Cologne to hold public office.

“It is evidence of the significance of the Jewish community in the year 321 because for the emperor to have bothered to write an edict must have meant that there was a substantial Jewish community that had wealth, because holding public office often came with financial obligations,” Weitzer added. “It is now 1,700 years since that edict was issued and the big message of the project is to demonstrate how long Jews have been a part of the history of Europe.”