In Ukraine, Jewish leaders mobilize to provide essentials to a community in crisis

The effort, organized by the Federation of Jewish Communities of Ukraine, is providing staples such as non-perishable food and water to community members 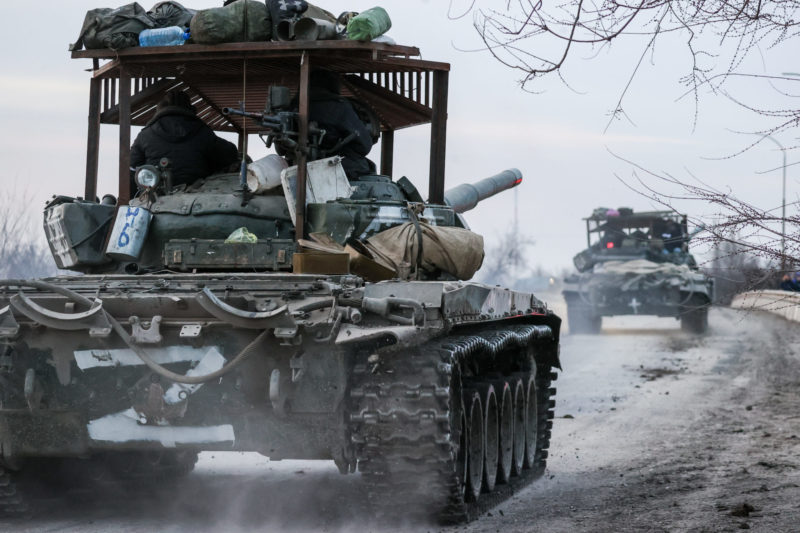 Tanks move across the town of Armyansk, northern Crimea.

This story first appeared on JewishInsider.com

Russia’s attacks on Ukraine began before sunrise on Thursday, taking many in the Eastern European nation by surprise.

“Everyone’s talking about preparing for a war, but… it just came suddenly,” Rabbi Mayer Stambler told Jewish Insider in a Zoom call from his home in Dnipropetrovsk in the central part of the country. “You know, you don’t really think it’s going to happen, you hope that diplomacy is gonna win. And 5:30 in the morning, to hear people bombing you… It’s unbelievable.”

When COVID-19 first hit Ukraine, the rabbi oversaw the creation of support networks to provide ritual items and kosher food to families and individuals celebrating Jewish holidays in isolation. Two years later, Stambler, who heads the Chabad-affiliated Federation of Jewish Communities of Ukraine, has been forced to mobilize those same volunteer networks — this time to provide basic necessities to Jewish communities around the country amid Russia’s invasion of the Eastern European nation.

Stambler, and other Chabad emissaries around the country, are working to make sure their basic needs are met as the country is largely cut off from the rest of the world. Grocery stores are devoid of basic necessities such as flour, with long lines to get basic items. Ukrainian airspace is closed, and people are being discouraged from traveling between cities, as the highways may be targeted by Russian forces.

The federation serves as the backbone for Jewish life in the former Soviet nation. Stambler arrived in Ukraine in 1991, as the country was breaking out from behind the Iron Curtain. In the three decades since his arrival, he’s overseen the community’s large-scale expansion.

“When we came over here 30 years ago,” Stambler explained, “people felt guilty being Jewish. We used to see a person [who was] Jewish and just walk over, close, you know… and they’re afraid. They’re like, ‘I’m sorry, but I’m Jewish.’ And now, people are proud to be Jewish.” Stambler attributed the shift in mindset to efforts to invest in education and Jewish communal life.

There are now roughly 180 Jewish communities around the country, with a population exceeding 350,000.

Among those in need of help are the tens of thousands of elderly Jews who have been largely homebound over the last two years. Stambler’s team is working to get them — and others who are running low on essentials such as non-perishable food and water — the support they need to last through the invasion — be that days, weeks or much longer.

In addition to providing food to community members, the federation is tasked with protecting Jewish institutions around the country.

“It’s not against the army, you won’t be able to deal with any army. But when there’s a situation of war, we’re very afraid of this banditism outside, and the Jews usually suffer from that, unfortunately,” Stambler said. “And we really are very, very weak with security, we just need real security. We have over 400 points that we need to secure.”

“Everyone is very, very afraid,” he added. “Things can change in minutes.”

Most diplomats have left Kyiv, the capital city. Israeli Prime Minister Naftali Bennett has publicly encouraged Israelis — and non-Israeli Jews — in the country to return. The Jewish Agency for Israel, which facilitates immigration to the country, has been inundated with requests, mostly from Ukrainians who have already completed their immigration applications but have not yet been issued visas.

But, Stambler said, many are staying put.

“We didn’t just stay here with our families just to stay here. We feel responsible… We’re going to make sure to feed people,” Stambler said. “If we have to risk our lives to do it, we will do it. There’s no question about it.”