How an online resource site for Jewish educators is learning from, and adapting to, its users

The portal's technical changes might look small, but they represent a larger evolution of both Jewish education and the Jewish community’s efforts to create digital spaces for professionals. 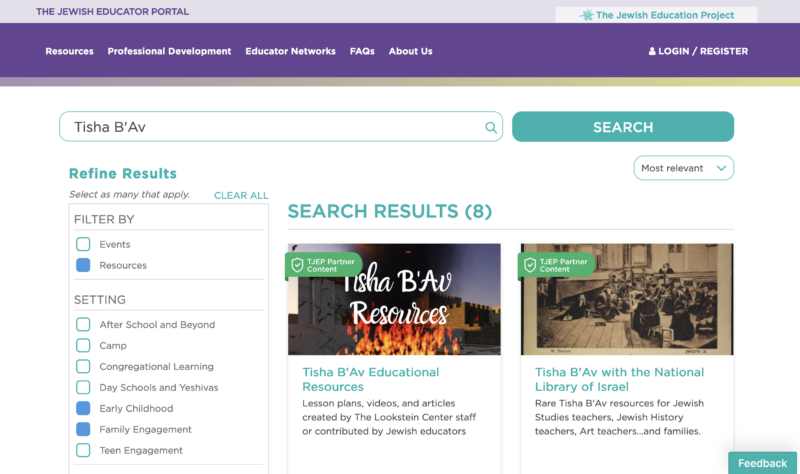 A search for Tisha B'Av resources on the Jewish Educator Portal

Ella Metuki watched with bated breath as a Jewish educator searched for teachable material in the Jewish Educator Portal. One of many user interviews, it would show Metuki, manager of online educational content for The Jewish Education Project, which runs the portal, if the $300,000 platform was worth the investment.

The educator “found a bunch of resources from JTeach.org…She said, ‘Oh, these are really good, and I’ve never heard of this organization,’” Metuki told eJewishPhilanthropy. For Metuki, the educator’s reaction was a win. The portal “exposed her to something she wouldn’t have otherwise heard about through her [denominational] movement or through her synagogue.”

That’s an experience many more educators are likely to have now that the portal has been updated with better search algorithms, and the ability for users to upload their own content – technical changes that might look small on the surface, but that represent a larger evolution of both Jewish education and the Jewish community’s efforts to create digital spaces for professionals.

The Jewish Educator Portal is part of a new wave of platforms building on the failures – and occasional hubris – of past Jewish initiatives online. The site aims to be a centralized library of Jewish educational content where educators can find resources for free, connect with each other in facilitated networks, and access professional development webinars. It’s also a steady stream of data about Jewish educators’ wants and needs as they navigate mental health concerns and having to explain global turmoil to children.

The May 2021 conflict between Israel and Hamas was when the portal “saw one of our largest peaks in usership and in creating user accounts,” said Jonathan Fass, managing director of educational technology and strategy for the Jewish Education Project. “We might think that Israel is off the radar for North American Jewry…we certainly did not see that on the portal.”

Launched in August 2020 with funding from the Jim Joseph Foundation and the Maimonides Fund through the Jewish Community Response and Impact Fund (JCRIF), and with support from the G.S. Humane Corp, the site is being built by Israeli developers at an annual cost around $50-100,000. Having started with 100 educational resources and 200 registered users with an account, the site has experienced steady growth: There are now 1,500 educational resources; 5,000 registered users; and 9,000 visitors a month.

The platform’s longevity depends on it being responsive to educators’ needs and collaborating with other organizations in the field of Jewish education, Fass said. Sefaria, the Anti-Defamation League and JTeach are among 24 official resource partners putting their content in the portal.

At the heart of the Jewish Educator Portal is its search engine for finding educational material, which was originally built around users searching for specific terms such as “Rosh Hashanah” or “Middot.” But that approach didn’t match the way people are used to searching online: by typing fuller sentences like “how to teach teens about Rosh Hashanah.” Some Jewish topics can also be spelled in several different ways with English letters, further complicating the effort to find resources.

The new search engine addresses those issues by operating with more of the flexibility of Google. “We’re using a search algorithm that accounts for some of the craziness of how many different ways Hanukkah could be spelled,” Fass said, “so that people can type in one way, but find everything they need.” Content in the portal is also being tagged with the age group and grade for which they are appropriate – something explicitly requested by educators.

The revamped search also means educators can more easily find resources that aren’t directly related to classroom learning, but that have become essential to teachers navigating a pandemic and political unrest. Since the portal launched, users have been “searching for materials about how to help children respond to crises, trauma and anxiety,” Fass said.

Building on the data from educator searches, Fass and Metuki have put more resources about social-emotional learning and managing anxiety in the portal for users to access, with the portal also partnering with the Blue Dove Foundation, a Jewish organization educating about mental illness and substance abuse.

But not all the classroom-adjacent resources that educators are finding are related to the doom and gloom of current events. Metuki pointed to Pride month, in June, when many portal users referenced a pronoun guide by Keshet, the Jewish LGBTQ advocacy group. “Maybe they’re taking it and they’re adapting it and they’re using it in the classroom,” Metuki said. “But it’s for us,” more so than for students. The pronoun guide has been viewed nearly 900 times.

As an online platform, the portal is also treading in the difficult, and at times contentious, territory of curating material, an increased challenge now that educators are able to upload their own work to the site. Every piece of content in the portal, whether from partner organizations or individuals, is screened before being uploaded, Metuki said. Individuals need to have a registered account and give some identifiable information about themselves before they can attempt to post their own material.

“We make sure that everything makes sense, that all the links are working, that it all looks and feels the way that we think it should be [so] that it will be best presented to our educators,” Metuki said. “Same goes for things that educators upload: we don’t mess with their content…but we do make sure that it meets our community guidelines.”

The portal’s approach to other digital pitfalls is one of caution: The Jewish Education Project has zero plans to sell user data collected by the site to the $232 billion data broker industry. And while it can be difficult to verify ages online, the portal is focused on being a platform only for those aged 18 and older to avoid any issues with hosting children. Part of verifying users is also about avoiding nefarious actors, such as neo-Nazis, who might try to create chaos on the portal.

“We would not approve [children’s] accounts, we want to be sure that this is an adult community of adults speaking to adults, so we’re very, very careful about that,” Fass said. “There are teens who create great materials for Jewish education. Unfortunately, we’re not going to collect them.”

Securing private and safe communication between educators is also a priority, Metuki said. User emails are not displayed on the site. Instead, the portal has a contact form that will forward a message to the receiving user’s email. Only if there is a reply will the sender be able to see the other person’s email address.

But caution doesn’t stop the portal from serving its purpose as a one-stop shop for educational material, Metuki said. In particular, she’s excited about being able to reach “educators, not on the coasts, not in New York, who don’t have as much access to resources, to professional development, to educators like them,” she said.

She referenced one Jewish educator she knows in Nebraska who practices law in their day job. “Our future is in reaching more and more educators who don’t have this access [to educational material] built into the work that they’re doing, who really could benefit from this in a really robust way,” Metuki said.