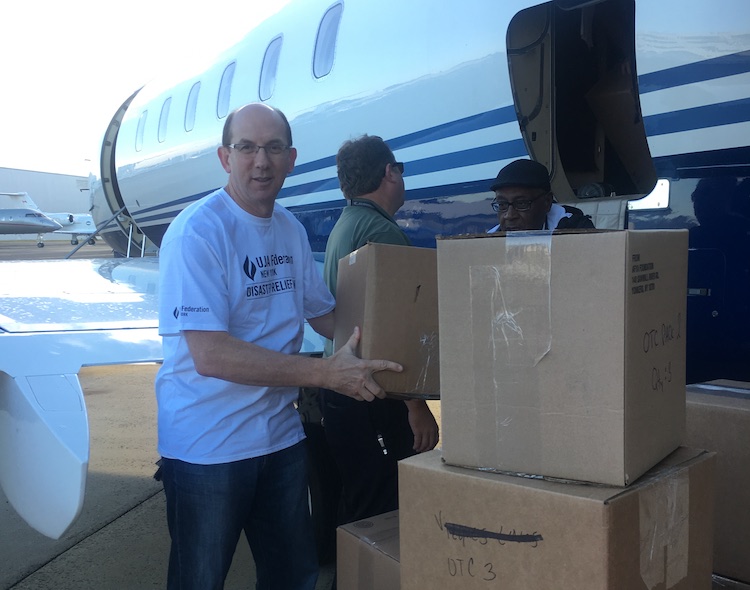 UJA-Federation of New York, the country’s largest Jewish nonprofit, raised $249.6 million in its fiscal year ending June 30, 2021, an increase of 9% over the preceding year, despite concerns voiced by CEO Eric Goldstein at the start of the coronavirus pandemic that fundraising would suffer. But the opposite phenomenon occurred, as the federation’s ability to help people suffering from pandemic-related job loss, hunger and other human services needs both attracted new donors and encouraged existing major funders to increase their giving. The federation’s executive vice president of financial resource development, Mark Medin, explained in a conversation with eJewishPhilanthropy that giving in the capital and special projects category fueled the increase.

Helen Chernikoff: I was surprised to see fundraising up in your fiscal year, which started at the height of the pandemic in 2020 and ended when it was still going strong, in 2021. How do you explain that?

Mark Medin: The ongoing impact of the pandemic is not over. The needs in the community remain very significant. We look at five key needs: food insecurity, job loss, financial support, mental health and domestic violence. In all five of those areas, our agencies continue to be seeing record need. The need in the community remains at an elevated level. Our ability to communicate that to our donor base has been of paramount importance, and our donors have stepped up in really significant ways. Individuals are suffering and organizations are suffering.

MM: The agencies that rely on fees for services that they provide to generate revenue to fund their operations were most severely hit by the pandemic. We communicated to our donor base that we needed their help to sustain the institutions of Jewish life — JCCs and Jewish camps and the like. We provided tens of millions of dollars in loans to sustain JCCs and other institutions that rely on that model. When it comes to food insecurity, the organizations that serve them were seeing lines of people at record levels. The demand for food was so extreme. We talked about those issues with our donors. They enabled us to increase grants specifically in that food security area.

HC: An increase in gifts from major donors in the “capital and special projects” category — from $17.3 million to $40.2 million — accounted for the increase in the total amount that the federation raised this year. Can you share an example of a major donor who responded to a very specific need?

MM: There’s a longtime, six-figure donor who was very moved by the need in food insecurity and in social services in general. We have been setting up a series of hubs to deliver a range of services in a single location in different parts of the area we serve. This donor had roots in Westchester, and wanted to know what could be done there. We talked with partners about setting up one of these hubs there, and this donor said, “We’ll underwrite the cost of that.” We had numerous situations like that. Multiple donors said that they would fund a specific project. Others said that they would double their gift this year, or make a one-year gift in light of the fact that the federation had given $67 million in extra grants and loans that we made due to COVID over the past 18 months.

HC: And are you seeing any declines in the level of need yet?

MM: We’re not seeing any significant reduction in need. The impact of the pandemic continues to be high. The recovery hasn’t yet happened for a significant portion of the community.

HC: We’ve talked a lot about major donors and how they’ve contributed during the pandemic. What about “everyday donors” — the larger number of people who contribute smaller amounts?

MM: Givers at the lower end of the spectrum have been more challenged. Those are the people who have been impacted most significantly by the pandemic. While our overall campaign has been successful, the primary drivers have been the higher-end donors. They’re the segment of our community who have been able to pivot most effectively to a remote work environment. Then again, the lower end of the spectrum has always been a lower percentage in terms of what makes up the success of our campaign. The success is primarily driven by gifts of $1,000 or more.

HC: What are the issues besides the pandemic that are top priorities for the federation right now?

MM: The concept of people continuing to support the things they’ve always cared about, and also step up to help with needs around the pandemic, has been a message we’ve been driving home to our supporters, and many of them have been receptive. We’re fighting antisemitism, supporting Jews of Color, enhancing Jewish summer camp and strengthening connections to Israel at a time when people haven’t been taking trips to Israel.

HC: What are the big initiatives that are being supported by the capital and special projects category?

MM: We’re raising funds for the social service hubs in Queens and Brooklyn that are critical to ongoing needs in the community as well as part of ongoing recovery. The Brooklyn one isn’t open yet, so that remains a major focus. We’re also focused on the Henry Kaufmann Campgrounds, where we’re rehabbing 500 acres of facilities that sustain so many of our JCC camps.

HC: What was your donor communication strategy during the pandemic?

MM: There were three ways we reached out. There was a very proactive one-on-one initiative in which our staff reached out to their longtime donors. We provided talking points on a daily basis so they could reach out and tell the story. We also organized hundreds of terrific Zoom programs with high-profile speakers, and we would use the first 10 minutes of every program to talk about what we were doing. Just last week we held one with Lior Raz, the star of “Fauda,” the Israeli TV show. Almost 2,000 people attended that, and [in] the first 10 minutes, they heard about our COVID relief work. The third way was social media and marketing, putting information on our social platforms and emailing.

HC: When the pandemic hit, the federation laid off 54 people, citing an expected decline in fundraising. And indeed, the amount raised by your annual campaign did decline from $171.6 million $163.2 million. Are you able to rehire now?

MM: We are now able to replace and bring people back where appropriate and necessary. We’re not just bringing everybody back, because we’ve been able to adapt and restructure. But we’re being strategic, as needs arise. At a time when no one was doing any travel, there was no missions department, but now as the world is opening up again, we can bring staff back to work in that area. When there were no in-person events, you didn’t need events staff. We have two in-person events taking place this week, so we have needed to rebuild our events department.