Two groups will be coming together – What Matters: Caring Conversations About End of Life, and the Shomer Collective. 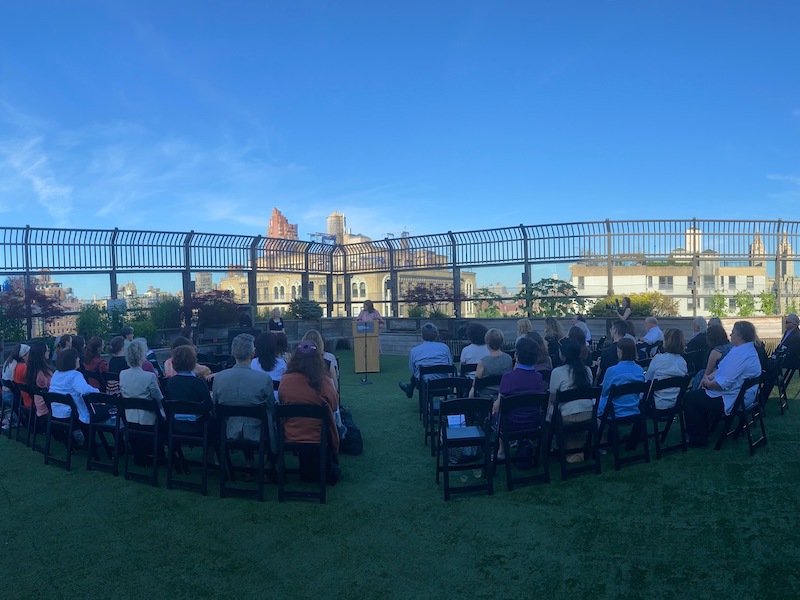 The event marking the alliance of the Shomer Collective and What Matters on June 13 in New York City.

When it comes to the difficult conversations surrounding death and dying, Jewish tradition can offer wisdom and guidance. But such often-fraught discussions have at times been pushed out of view for people.

Now, the joining of two groups working on  planning for medical treatment and other end-of-life issues — all through a Jewish lens — could thrust these topics into the Jewish public square in a new way. An event on Monday night on the rooftop of the Marlene Meyerson JCC Manhattan on the Upper West Side marked the coming together of two organizations – What Matters: Caring Conversations About End of Life, and the Shomer Collective. The two groups will join forces starting July 1, Rabbi Melanie Levav, Shomer Collective’s founding executive director, told eJewishPhilanthropy, with What Matters becoming a signature program of the Shomer Collective.

The event at the JCC drew about 60 people representing some of the city’s largest synagogues and Jewish organizations,  who shared stories of how the programs have impacted their communities.

“Death is scary,” Levav told eJP. “It’s the one thing we can’t teach about from our own experience. There are so many unknowns… Too many people and families in our Jewish communities end up in crisis at the end of life because of our inability, hesitation [or] fear in talking about how we want to live in the face of mortality,” she said. “Shomer’s work in culture change aims to bring the conversation about death and dying back into the Jewish communal square, to reduce the fear by making conversations about mortality part of everyday living.”

Both organizations focus on applying Jewish wisdom to improving end-of-life experiences. What Matters, founded in 2015 as an initiative of the Manhattan JCC, enables individuals to engage in advance care planning —or planning for medical care decisions in the event that the person in question can’t make their own decisions — infused with Jewish wisdom. It asks people to think about, plan for and take steps to ensure that when the time comes, their end-of-life wishes will be respected and honored. Shomer Collective, a startup founded by members of the Natan Fund, launched in 2020 with a mission to improve end-of-life experiences for individuals and their families, inspired by Jewish wisdom, values and practices, by curating content and resources and building a diverse network of organizational partners.

What Matters mostly serves members or clients of 20 sites in New York City, and the integration with Shomer Collective will make it accessible to individuals and communities across the country. Shomer Collective will also adapt the program for online access, with a particular focus on people who are unaffiliated with Jewish institutions. What Matters will offer individual and group advance care planning conversations; training and certification of facilitators; and support to bring What Matters to new organizations and communities. The partnership will expand Shomer Collective’s growing menu of end-of-life services and resources direct to individuals, as well as through partnerships with Jewish organizations in communities throughout the U.S.

“The recognition of our mortality is built into our daily liturgy, into the conversations of the rabbis of the Talmud; it’s there if we’re willing to look for it for the wisdom it can bring to help quell the fears,” said Levav,  who previously served as the director of PJ Library in New York, the Jewish children’s book program of the Harold Grinspoon Foundation. “In the last hundred years or so, we’ve pushed death and dying out of our view, as the developments of long-term care and increase in hospitalizations and advances in healthcare have removed the experience of being with the dying from within our homes and communities. Shomer’s work will bring the conversation back into Jewish communal settings to help people recognize the value of talking about death and dying while we’re well, to live lives of greater meaning and connection.”

Levav became interested in this work after helping her in-laws, both of whom were Holocaust survivors, toward the ends of their lives; she said that they “had expressed their wishes ‘early and often’ for their end of life to their only child,” and that through her experience as a social worker and Jewish educator, she “saw too many families end up in crisis because they didn’t know how to talk about/were afraid to talk about death and dying.” During her rabbinic training at JTS, Levav trained as a chaplain focused on end-of-life and serious illness in the Center for Pastoral Education, and now is a board-certified chaplain through Neshama: The National Association of Jewish Chaplains. Conversations with her friend Felicia Herman, then the executive director at Natan, about these issues led them to start conversations around losses suffered by friends and Natan members. Natan engaged Levav as a consultant to help Herman develop Natan Lab: End of Life, a yearlong course of study for Natan members that led to the creation of Shomer, Levav said.

Shomer’s work is focused on “liminal moments,” the times when people are more open to thinking about end-of-life issues. “In the advance care planning world, which is where What Matters started, this is often referred to as the 5 Ds: death (of someone close to you), divorce, decade (reaching a new one), diagnosis (of a serious illness), decline (in your health or someone close to you.) We focused on reaching people at these stages in life, regardless of specific age,” Levav said. The COVID-19 pandemic, she added, amplified the immediate need for such a project, bringing death and dying to the front of mind for countless numbers of people who had heretofore avoided the subject.

Levav says that Shomer Collective functions as “a concierge, a curator, a convenor and change agent.” Among its offerings are educational Zoom sessions to empower people with the knowledge and Jewish wisdom to make their own choices regarding funeral planning, medical decision-making and alternative burial technology. One program explored Yom Kippur as “a dress rehearsal for death and an opportunity to contemplate life,” while another created space for grief in partnership with the Bay Area’s Jewish Studio Project on Mother’s Day and Father’s Day. The organization also publishes writing on relevant topics, encouraging multigenerational conversations around end-of-life issues.

What Matters also trains and certifies volunteer advance care planning facilitators, educates local communities and develops resources like Sage Voices, a repository of videos by rabbis and educators on Jewish topics related to end-of-life, produced in partnership with the Jewish Theological Seminary, the Conservative institution.

“Contemplating one’s own end-of-life and experiencing the death of someone close are underappreciated on-ramps to Jewish education and engagement for people of all ages,” Levav said in a statement.