Activists say the issue of reproductive rights is much more in the public eye than it was 50 years ago. 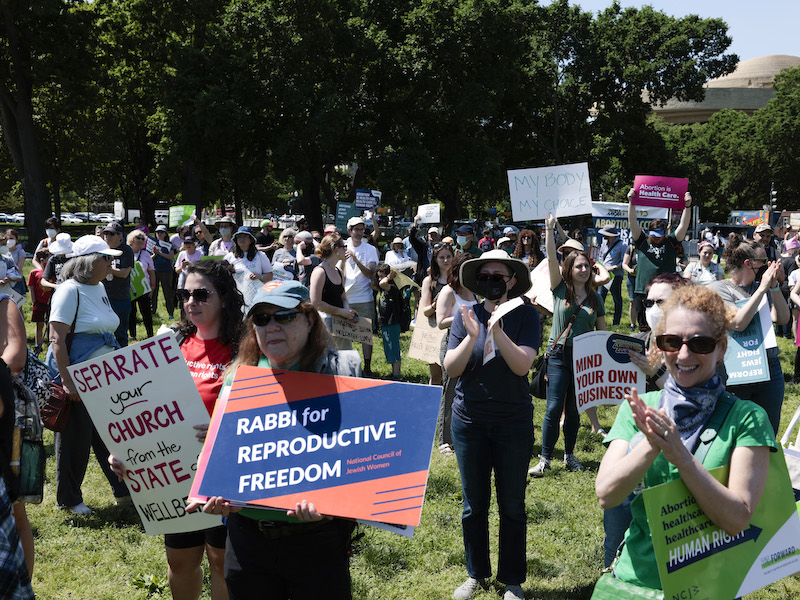 A Jewish rally for reproductive rights in Washington, D.C. on May 17.

Before Roe v. Wade guaranteed a constitutional right to abortion in 1973, Susan Weidman Schneider said women seeking the procedure would feel an “often scary solitude.” At the time, abortion was criminalized across much of the country, and often came along with the shame of being pregnant, especially for women who were unmarried.

“You were surrounded by people who hated you, who scorned you, who wished for the pregnancy that you knew you had to end to continue, without the sisterhood and sometimes brotherhood that surrounds people now,” Weidman Schneider, 78, the editor-in-chief of Lilith magazine, told eJewishPhilanthropy. “Social media did not exist in those years of whispered clues to abortion providers.”

Now, after the Supreme Court overturned Roe in its recent ruling, Dobbs v. Jackson Women’s Health Organization, the situation has changed. Four days after the Dobbs ruling last month, The New 40 — Lilith’s cohort for writers older than 40 — “spontaneously combusted” into action, Weidman Schneider said, composing an “outpouring of stories and commentary” about their personal encounters with abortion and reproductive justice.

“[This was] not just a desire to create change and to undo the evil but also to have their voices registered loud and clear,” Weidman Schneider said. “And I imagine that that is going to be happening in other places, maybe in groups that similarly have built trust and confidence in one another, to the point where they want to take some kind of collective action.”

For large Jewish women’s groups, some of which have supported reproductive rights for decades, the recent Supreme Court ruling has spurred action — from statements condemning the decision to national campaigns and fundraising drives. While the stigma around abortion isn’t gone, the issue of reproductive rights is much more in the public eye than it was 50 years ago.

“We have advocates in every state in the country,” Rhoda Smolow, the national president of Hadassah, the Women’s Zionist Organization of America, told eJP, pointing to the group’s 300,000 members, supporters and associates. “So we are able to really act to activate our membership to go out and to really speak on behalf of an issue, which makes us a very powerful lobby and very powerful voice.”

Elaine Reuben, 81, a philanthropist and longtime feminist activist, was studying literature and theater at Stanford University in the 1960s when she became pregnant and sought an abortion. To do so, she had to get letters from psychiatrists and doctors stating that she was under suicide risk if she didn’t have the procedure. A hospital committee then assessed her case and voted.

“Who are these people who are voting about my life, about my body?” she told eJP regarding the committee review. “I was always an outspoken, activist person, but that’s when I really became a feminist.”

Even after the recent Supreme Court decision, abortion is more widely available than it was half a century ago. The underground networks that connected women with abortion providers in the 1960s are mostly a vestige of the past, and national groups like Planned Parenthood, along with the internet, can help link services and those who need them. Today, rallies nationwide draw thousands of people of all genders and ages to protest for abortion rights. Pill-based abortion and funds for abortion seekers who require financial assistance also make the procedure easier to access.

Sheila Katz, CEO of the National Council of Jewish Women, told eJP that 50,000 people have participated in NCJW’s activism for abortion rights surrounding the court decision, by doing things like signing a letter or coming to a vigil. For NCJW, the current campaign is the latest expression of about a century of support for reproductive rights.

Founded nearly 130 years ago, the organization began working to provide access to birth control when it first became an option in the 1920s. NCJW founded the first 10 U.S. birth control clinics in the U.S., called Mother’s Health Bureaus, which later merged with Planned Parenthood.

“Our volunteers helped people gain access to contraception, reproductive health care and abortion,” Katz said. “We have been in the fight as long as it’s been here.”

NCJW now has 58 local chapters nationwide with more than 210,000 active members, and has raised more than $450,000 from some 3,000 donors for the Jewish Fund for Abortion Access, in partnership with the National Abortion Federation. Through the fund, NCJW will help provide support to legal campaigns to increase abortion access, a hotline with information about obtaining abortions and case managers for those who need to cross state lines.

“It’s not just an issue of dignity, it’s an issue of life and death,” Katz said. “The Jewish community has to be a united front to say ‘abortion is healthcare’; we need to have access to care for our communities and the people in them.”

While a string of major Jewish organizations have come out against the Dobbs ruling, major Orthodox groups have taken a different tack. Agudath Israel of America, a Haredi organization, backs the ruling, and the Orthodox Union said in a statement that it was “unable to either mourn or celebrate the U.S. Supreme Court’s overturning of Roe v. Wade.”

For Bethany Shondark Mandel, editor of the conservative children’s book series Heroes of Liberty and a contributing writer to the Salt Lake City-based Deseret News, those groups take an approach that encompasses the nuances of halacha, or Jewish law. Mandel told eJP that she would “absolutely not financially support” Jewish organizations that support reproductive rights because donations “could go towards ending Jewish pregnancies.”

“A lot of Jewish organizations believe that abortion is a Jewish issue, completely ignoring the halacha on the very narrow circumstances where that might be the case,” Mandel said. The statements by the Agudah and OU, she added, “were completely drowned out by more secular and left-leaning organizations [that] have misrepresented Jewish law and used it as a political cudgel when the reality is far more complicated.”

Mandel does have a target for her Jewish donations on this issue: groups that, in her words, “support women who decide they want to carry their pregnancies to term.” She named EFRAT in Israel, which encourages women to forgo abortion by providing information, emotional support and supplies ranging from a crib and baby bath to diapers and food. Mandel also named In Shifra’s Arms, which declined to comment to eJP, and provides material aid, financial aid and counseling to pregnant women. Neither organization actively opposes abortion rights.

Opinion within some Jewish organizations can also be varied. Smolow told eJP that Hadassah has members who say, “I can’t believe that Hadassah supports abortion,” even though, she added, the policy is “always clear as day.”

Hadassah plans to focus on “empowering women and men with the knowledge and information to make informed medical choices for themselves and their families,” Lauren Katz, the organization’s director of grassroots advocacy, told eJP. “What’s really central is the sacrosanct nature of that doctor-patient relationship.”

Hadassah has also urged its members to call their local representatives in support of two bills that would secure abortion access, and which recently passed the House of Representatives along party lines.

The Jewish Federations of North America told eJP in a statement, “The issue of reproductive rights is of great importance.” It plans to focus on giving local federations “informational resources to help them respond to this monumental case,” and pledged “to continue our decades-long history of providing support and resources to our health and human service agencies, to ensure the well-being and health of all women.”

Weidman Schneider believes that individuals who support abortion rights still have a role to play alongside national and local organizations. As states decide their individual positions, she said, people who live in states where abortion is legal should identify what they’re willing to do, from housing people to transporting them to a clinic.

“It’s the human stake in abortion rights, and we have to keep that front and center,” she said. Using the Hebrew words for “charity” and “good deeds,” respectively, she added, “That kind of good-on-the-ground, that tzedakah of doing those mitzvot, of course that should continue.”