Jewish organizations nationwide weighed in on the national debate sparked by the decision in Dobbs v. Jackson Women’s Health Organization, with many Jewish groups opposing the removal of a constitutional right to abortion. 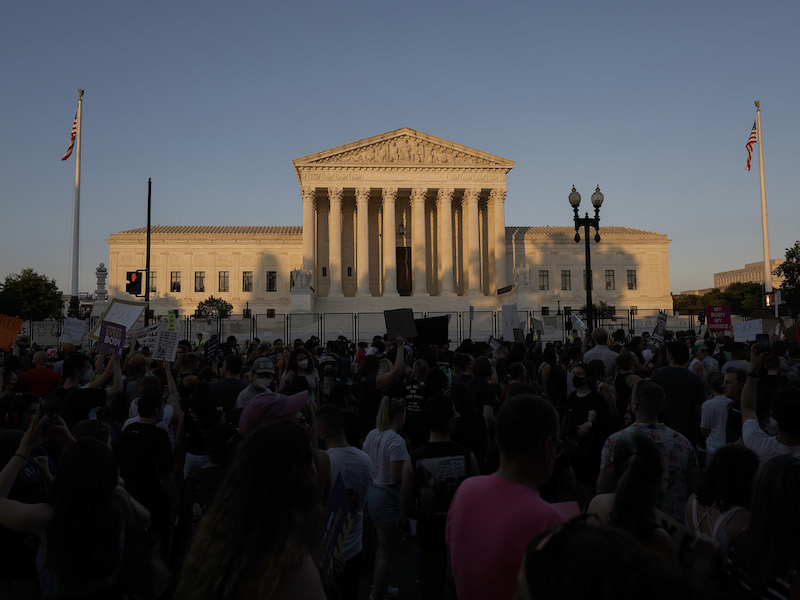 At least two national Jewish groups intend to cover travel expenses for employees or their dependents who are seeking abortions and live in states where the procedure is now restricted or banned, following the Supreme Court’s reversal of Roe v. Wade on Friday, eJewishPhilanthropy has learned.

Jewish organizations nationwide weighed in on the national debate sparked by the decision in Dobbs v. Jackson Women’s Health Organization, with many Jewish groups opposing the removal of a constitutional right to abortion.

Among the major groups opposing the decision were the American Jewish Committee, the Jewish Council for Public Affairs (JCPA), Hillel International, the Anti-Defamation League, Charles and Lynn Schusterman Family Philanthropies and leading organizations of the Conservative, Reform and Reconstructionist movements. “Prohibiting abortion access is contrary to Jewish law, traditions, and our principal value of saving a life; it enshrines specific religious imperatives in American law,” JCPA’s statement read.

Agudath Israel of America, a Haredi organization, supported the Dobbs ruling, calling on Americans to “embrace a culture that celebrates life.” An addendum to the JCPA statement noted that the Orthodox Union, a major umbrella group, “cannot endorse a public policy that does not reflect the complex response of [Jewish law] to the abortion issue.”

Rabbi Abba Cohen, Agudath’s vice president for government affairs, told eJP that his group would not fundraise on the issue but would advocate for laws reflecting its stance that abortion should be largely prohibited but allowed in rare circumstances.

In the decision’s wake, donations to the National Council of Jewish Women’s (NCJW) abortion access fund, which launched last month to help people obtain abortions, have nearly quadrupled, from more than $56,000 before Friday to more than $204,000 from more than 1,700 donors as of Sunday night.

NCJW, which has been perhaps the most active Jewish group in support of reproductive rights, is also currently working with 75 Jewish groups, including national organizations, on their policies regarding abortion. “Everyone’s been extremely open to figuring out how to help their employees in this moment,” NCJW CEO Sheila Katz told eJP. While all of its employees live in states with abortion access, Katz told eJP that her group would fund abortion access for its staff or dependents if the need arises.

Another organization that plans to fund abortion access for its employees and their covered dependents, to the extent permitted by law, is the Israel on Campus Coalition, which has 30 employees, including in states with abortion restrictions.

While Hillel International, which has chapters on campuses in states across the country, has not as of yet committed to funding abortions out of state, it is examining what its best options are for supporting its staff and students nationwide.

“As the largest global organization supporting Jewish students, today we are focused on doing just that: supporting students, and creating a safe and caring environment both for them and for the Hillel professionals who serve them,” the group’s statement said. “In the weeks and months ahead, we will continue to focus on providing resources to our students and professionals to support their health and wellbeing, especially those in states where the ruling has an immediate impact.”