Unlike larger Jewish communities on the coasts, the Jewish federations in those states can be small, sometimes with only one employee. 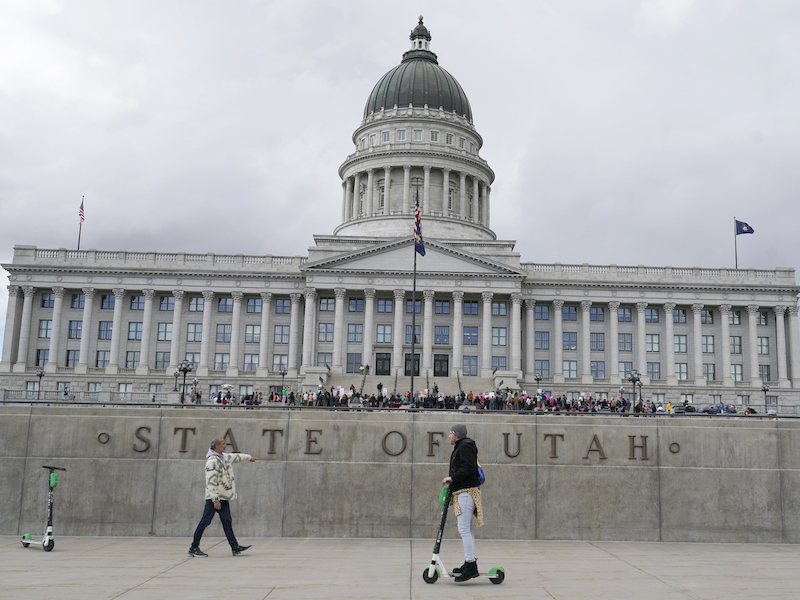 There are fewer than 10,000 Jews in the state of Alabama, and only a fraction of them live in the area surrounding the capital of Montgomery. But on Friday, the Supreme Court’s decision reversing Roe v. Wade hit home for that community, as it triggered a complete ban on abortion in the state.

Now, the sole employee of the Jewish Federation of Central Alabama, Executive Director Philip Ensler, needs to figure out how to represent his community to the broader region in responding to a prohibition opposed by many Jews in the area. He stressed that Jewish law permits abortion in some cases.

“For some religious people, it’s a victory, but there are certainly people who are very much of faith, and their faith has different guidelines around what women should be able to do for their health,” Ensler told eJewishPhilanthropy. He added that in his deeply conservative state, most but not all Jews are opposed to the decision: “It’s not monolithic or overwhelming in the sense that necessarily the entire Jewish community is opposed to the decision,” he said.

Ensler faces the same dilemma confronting organized Jewish communities in the nine states that enacted bans on abortion upon the court’s decision in Dobbs v. Jackson Women’s Health. Unlike larger Jewish communities on the coasts, the Jewish federations in those states can be small, sometimes with only one employee. One of the states, South Dakota, lacks a traditional Jewish federation and is represented from Minnesota.

Yesterday, eJP reached out to 13 federations and related groups across the nine states, based in cities including St. Louis, Mo., Salt Lake City, Utah, and Little Rock, Ark. Of the seven that responded, most were cautious as they hash out a strategy. “We’re considering what we can do to attempt to be helpful given the challenging circumstances people find themselves in,” Alex Shapiro, executive director of the United Jewish Federation of Utah, told eJP.

While a couple of Jewish organizations have pledged to fund out-of-state abortion care for employees, some of the smaller federations told eJP they didn’t expect the question to be relevant to them because they have such small staffs. “We’re certainly open to revising our personnel policies should we hire a woman, and need to have some accommodations around that,” Ensler said.

A few of the federations, such as Milwaukee’s, echoed statements published by major national Jewish groups opposing the Dobbs ruling. Sara Klein Wagner, president and CEO of one of the larger federations, in Louisville, Ky., told eJP that the ruling “has left many feeling confused and frightened.”

“We feel compelled to say that our Jewish Federation of Louisville supports a women’s right to the full spectrum of reproductive care and choice,” she told eJP. “We are actively working on specific details to best support our employees and the greater community.”

Others, such as the St. Louis federation, are consulting with local partners, from synagogues and day schools to the National Council of Jewish Women, which has been active on behalf of abortion rights. The Jewish Community Relations Council of Minnesota and the Dakotas, which represents South Dakota, plans to put out a statement addressing both Dobbs and Monday’s Supreme Court ruling allowing a public high school football coach to lead Christian prayers on the field.

Some are considering a more aggressive approach. Community members in central Alabama, eJP has learned, are weighing suing the state on the grounds that the ban violates Jewish religious freedom, similar to a recently filed lawsuit challenging impending abortion restrictions in Florida.

The status of the laws, meanwhile, remains uncertain: The bans in Utah and Mississippi, for example, were temporarily blocked by judges. Wisconsin’s Democratic governor has pledged not to enforce his state’s ban. And restrictions or bans in larger states like Texas and Florida, with much larger Jewish populations, are set to take effect soon.