In an interview with eJewishPhilanthropy on Thursday shortly after the announcement was made, Almog stressed the agency's mission of facilitating aliyah. 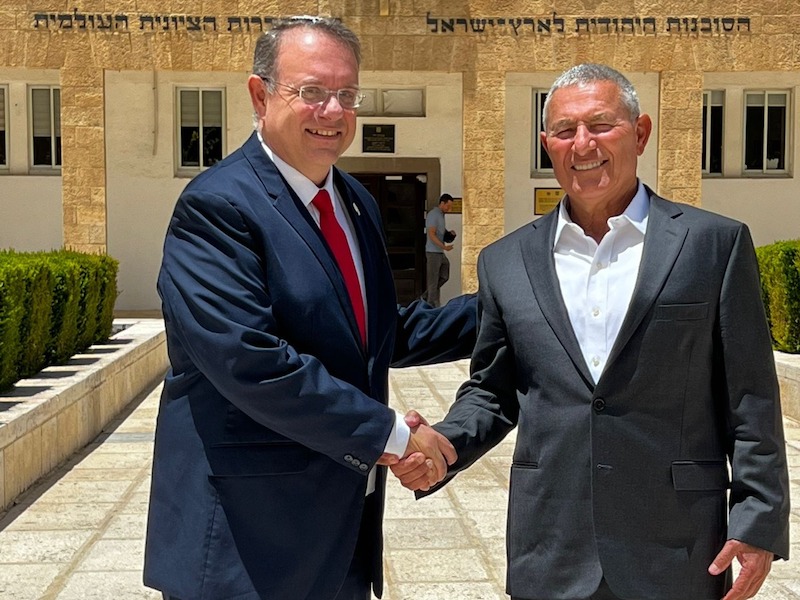 courtesy of the jewish agency for Israel

After a roller-coaster search lasting more than a year, The Jewish Agency for Israel has a new incoming chair of the executive: Doron Almog, a former Israel Defense Forces general and activist for the disability community.

In an interview with eJewishPhilanthropy on Thursday shortly after the announcement was made, Almog, 71, stressed the agency’s mission of facilitating aliyah, or immigration to Israel, which has taken on a greater urgency as tens of thousands of Ukrainians have sought refuge in Israel from Russia’s invasion. Immigration from Ethiopia also recently restarted after a hiatus of more than a year.

Almog, who was selected by The Jewish Agency’s nominating committee, told eJP that he also hopes to continue the organization’s work of strengthening Jewish identity: “The main role is to strengthen the relationship between the Jewish diaspora and the state of Israel, and to reach every Jew in the world, all the Jewish communities all over the globe,” he said.

The retired major general was light on the details of how he plans to execute that mission, stressing that he was just nominated and will be elected in what is expected to be a consensus vote by The Jewish Agency board of governors next month. He said he wants to focus on reaching young people, and strengthen connections between Jewish denominations, but did not get more specific than that.

Two decades ago, Almog served as head of the Israel Defense Forces’ Southern Command, overseeing the area around the Gaza Strip. Prior to that, he served in the 1976 hostage rescue at Entebbe International Airport in Uganda, and also took part in Operation Moses, which brought Ethiopian Jews to Israel in the 1980s.

Since retiring from the IDF, Almog has dedicated himself to disability rights in memory of his son, Eran, who died at age 23 from Castleman’s disease. Almog is the founder and chairman of Adi Negev-Nahalat Eran, a rehabilitation village offering a range of services to people with disabilities. In 2016, he won the Israel Prize, the country’s highest honor, for his activism.

“My mission was to set the highest life standard for the disabled, for the wounded, [to] have a decent society around them, ensuring that they won’t be discriminated [against],” he said. Regarding his impending work at The Jewish Agency, he said, “It’s related to the same values: All of Israel is responsible for one another.”

Almog’s selection followed a year in which a string of candidates for the position were floated after his predecessor in the role, Isaac Herzog, left after being elected Israel’s president last June. Almog enters the position as Israel’s government, which works closely with The Jewish Agency on immigration and other matters, grapples with an ongoing coalition crisis that could lead to elections later this year.

Almog feels the drama of the protracted search is behind The Jewish Agency, and added that he does not affiliate with a political party. He hopes to remain outside the fray. His two predecessors, Herzog and former Soviet refusenik Natan Sharansky, both served in Israel’s Knesset prior to taking the job.

“This whole series of elections in the last year is not relevant anymore right now, the election is finished, I’m chosen and we need to do the work,” Almog said, in response to a question about the search process. Regarding the coalition crisis, he said, “I’m not coming from politics, I’m out of politics and I don’t belong to any political party.”

Another hot-button issue that has occupied Almog’s predecessors is the question of expanding a space for non-Orthodox worship at the Western Wall. Sharansky was the architect of a government compromise, since suspended, that would have enlarged a non-Orthodox plaza at the holy site. Almog declined to comment on whether he would work on the issue, saying he would address that question when he takes office. But he said strengthening relations between Jews of different denominations was a priority for him.

“I feel the liberty to create a bridge between all the Jewish segments – the Orthodox, the Conservative, the Reform, the traditional, to find the bridge and to unite the people by our values, by mutual responsibility, by a sense of commitment and pride for the Jewish people,” he said. “