Although the program is run through HUC-JIR, classes are nonsectarian in nature. 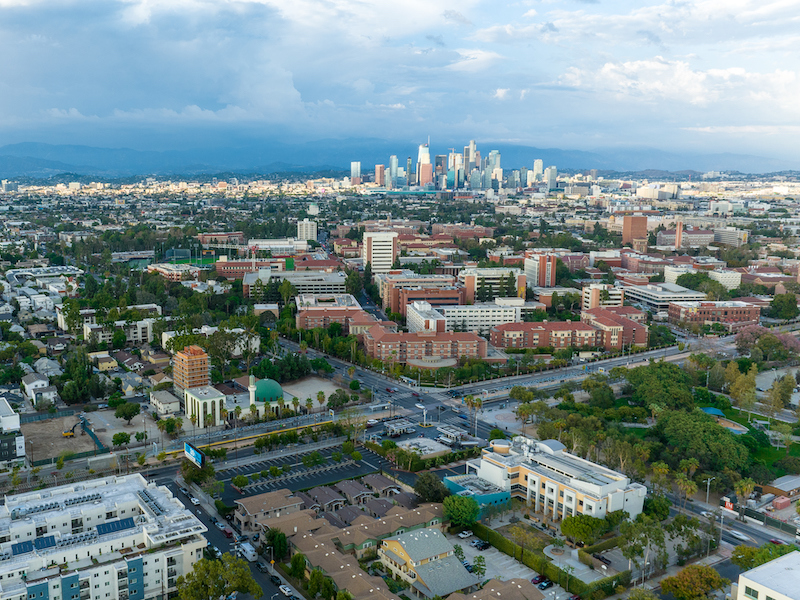 A view of USC.

The Los Angeles branch of the Hebrew Union College-Jewish Institute of Religion (HUC-JIR) sits a block north of the University of Southern California (USC) campus, a geographical proximity that has led to a decades-long partnership.

The Reform institution is best known as the place where rabbis, cantors, Jewish educators and nonprofit professionals receive training, but it is also the home of HUC-JIR’s Louchheim School for Judaic Studies, which — thanks to a 50-year collaboration— serves the much larger campus down the street, functioning as USC’s undergraduate Jewish studies program.

And as of this school year, the partnership between the small Jewish school and one of the most famous universities in the country has been renewed for another 25 years.

Dave Cohn, who leads USC Hillel — which reaches 75% of Jewish students at the university — said the benefits of the partnership create “an uncommon value proposition,” providing “the best of both worlds academically.”

“USC is a global institution in higher education that offers unparalleled resources, and HUC is a long-standing leader in our field and in preparing Jewish professionals for service to the community, Cohn, whose official title is the Allen & Ruth Ziegler executive director of the Hillel, told eJewishPhilanthropy. “The co-location of these schools has offered a nimble combination of resources and the willingness of both to nurture and cultivate the partnership.”

Currently 10 HUC-JIR faculty members teach Jewish studies classes to an estimated 650 to 800 USC students per year, many of them non-Jews, Leah Hochman, director of the Louchheim School, told eJP. There are about 100 students at HUC-JIR in Los Angeles, with more taking virtual classes.

Cohn added that the partnership also strengthens the network of support for Jewish community on campus and creates a strong partner in HUC-JIR that can stand with Jewish students when challenged, for example, by antisemitism. He added that access to the Jewish community in Los Angeles is another “remarkable facet of the experience.”

“I think the gold mine is in what we’re doing — thinking and developing critical skills and comparative work and teaching people about Jewish studies and how to use it as an angle to look at the world,” Hochman told eJP. “In a prism of many facets — that’s where I think the beauty [of the program] is.”

The 50th anniversary was celebrated at a gathering on Sept. 12, with USC President Carol Folt  and HUC-JIR President Andrew Rehfeld in attendance, along with some of the institutions’ trustees, governors, alumni, supporters, community partners, faculty, administrators and students.

In terms of the financial piece of the relationship, HUC-JIR uses the same tuition rate per credit that other USC schools and colleges use, after student costs are calibrated and University fees are assessed. The published USC per-unit rate is $2,035.00. Most Jewish studies classes are four units each.

From a student’s perspective, Hochman added, the experience is “seamless.” Jewish studies is a USC program: all the classes are at USC, students register through USC and get USC credits. The only difference is that teachers who teach with a Jewish studies designation are employed by HUC-JIR. HUC-JIR refers to the program as the Louchheim School, while USC calls it the Jewish studies program.

The partnership has led to eight academic programs, including a Jewish studies major and minor as well as a minor in Jewish American studies; a graduate certificate program that allows USC’s doctoral candidates to enroll in credit-granting courses at HUC-JIR; and four dual degrees for master’s students in HUC-JIR’s Zelikow School of Jewish Nonprofit Management: earning master’s degrees at USC in public administration, social work, communication management and business administration.

The USC-HUC partnership is not the only one between a rabbinical seminary and a private nonsectarian university. In New York City, students can enroll in a joint program between Columbia University or Barnard College and the Jewish Theological Seminary, a Conservative institution. But unlike HUC, JTS does not run Columbia’s larger Jewish studies program, and the joint program is geared toward Jewish students, whom it hopes to train “for responsible Jewish citizenship and leadership,” according to its website.

Hochman said that Louchheim’s Jewish studies classes “offer students the chance to explore their own notions of self as well as their sometimes not-as-yet examined notions of others,” Hochman said. “And that can be really powerful in terms of self-discovery, broadening horizons and expanding one’s sense of other human beings and their different experiences. I find that to be the important work of undergraduate education.”

Although the program is run through HUC-JIR, classes are nonsectarian in nature. In one recent example, in an undergraduate Jewish studies class discussion, students looked at an antisemitic tweet by Kanye West and the responses it provoked alongside the 1947 film “Gentleman’s Agreement,” which examines a non-Jew’s experiences with antisemitism while posing as a Jew. Among HUC’s graduate students, the conversation about West’s antisemitism was different, centering on how to reckon with the moment in a Jewish educational or congregational setting, she said.

Yusuf Lenfest, a USC doctoral student in religion and political theory with a longtime personal and academic interest in Judaism, told eJP that the most powerful part of studying at both USC and HUC-JIR has been giving him “a distinctive perspective on Jewish history and thought, while also widening the scope of discussion in a way that has fostered greater and deeper understanding.”

“It need not be a question of whether we study religion from within or from the outside,” Lenfest, who has done academic work in Jewish history, phenomenology and Islamic-Jewish relations, told eJP. “The study of religion, tradition, or belief always entails an interpretation of meaning and experience.”