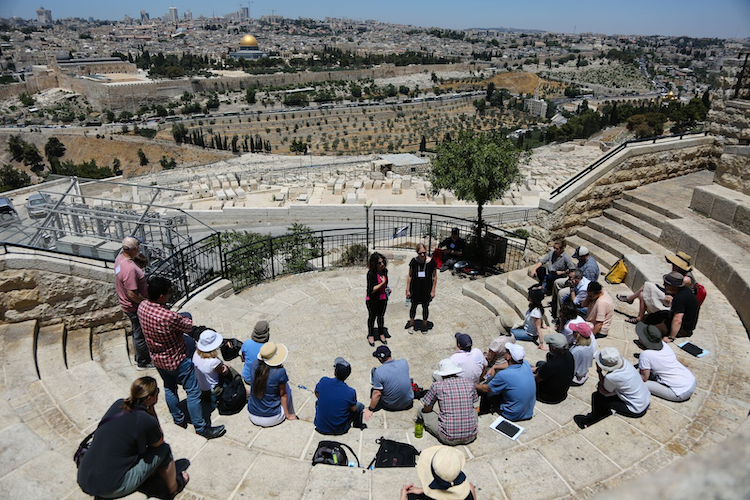 Encounter, the organization dedicated to helping American Jewish leaders broaden their view of the Israeli-Palestinian conflict, is broadening its own mission by investing $1 million in a similar program for Israeli Jews. The expansion will be facilitated by a logistical change — the hiring of a tour operator — that will help the group run more trips, said Executive Director Yona Shem-Tov.

“The last six years, we have cultivated a network of American Jewish leaders, and we’ve been quietly positioning ourselves to do this work with Israelis,” she said. “Coronavirus put the travel on pause, and gave us time to sharpen our plans.”

While Encounter used to organize its own trips, and carried about four per year, it’s now working with Mejdi Tours, which will enable it to double the number, Shem-Tov said: “We did this because we are interested in scale. We’re not a tour operator. We’re a leadership education organization. If we are going to be able to move the needle on the conversation, we need to meet that appetite.”

Founded in 2005, the group’s core program — until the pandemic hit in March 2020 — was an invitation-only trip to Palestinian communities in the West Bank and East Jerusalem for American Jewish leaders. It included webinars both before and after the trip, and encouraged post-trip participation in an alumni network, such as a circle of 30 leaders in the Boston area and another of Modern Orthodox rabbis.

The trips were initially offered exclusively to rabbinical students, and over the years, the group gradually broadened the eligible population to include philanthropists, communal professionals, clergy, academics and journalists. More than 3,000 such individuals have gone on the program, but the trips for American Jews have not yet resumed, Shem-Tov said.

The organization has run two pilots for the Israeli program, one in the summer of 2019 and one in January 2020. After the violence that accompanied an 11-day conflict between Israel and Hamas in May, Encounter ran its first in-person gathering between Israelis and Palestinians. The first full-length, four-day trip for Israelis took place in the beginning of October, and Encounter anticipates offering nine such trips in addition to at least four one-day programs in 2022.

“Encounter wants participants to come away with a more empathetic view of what Palestinians experience and what Palestinian life is like,” said Michael Koplow, chief policy officer at the Israel Policy Forum. Koplow is an alum of the program, but he is not involved in the new work with Israelis, and Israel Policy Forum has no relationship with Encounter. “I don’t think Encounter has any specific view of what political or ideological conclusion they want people to draw.”

In 2022, Shem-Tov plans to hire two new staffers in Jerusalem to support this expansion. She projects the group’s budget for the coming year will be $2.9 million, about double what it’s been in recent years.

Encounter’s board is the primary supporter of the new program, Shem-Tov said. An American Jewish foundation that is a longtime investor in Encounter is also supporting it, and two new foundations have expressed interest in doing so. Shem-Tov declined to disclose either their names, or the names of Israeli Jews who have participated in the new program.

“The risks for both Palestinians and Israelis to engage with us, and with one another through Encounter, are not insignificant,” she said. “Each constituent brings deep and legitimate concerns to the table, and the fact that we have at least temporarily earned their trust to experiment with this is not something we take lightly.”