Initially scheduled for September 2020, the rules are now set to be proposed this December. 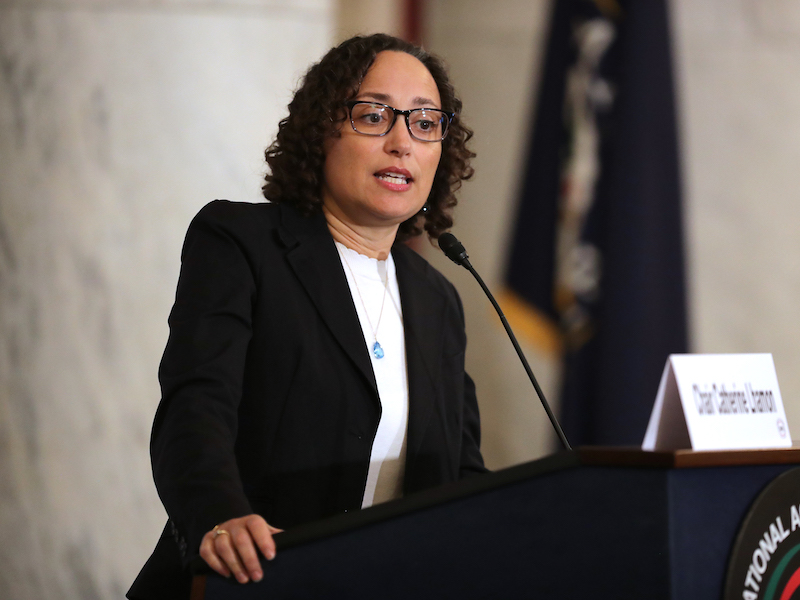 Catherine Lhamon, pictured here in 2018, was confirmed in October 2021 as assistant secretary for civil rights in the Department of Education.

The U.S. Department of Education has repeatedly delayed a process that aims to codify civil rights protections for Jewish college students, eJewishPhilanthropy has learned.

The delays have taken place under the presidential administrations of both Donald Trump and Joe Biden, and relate to Trump’s 2019 Executive Order on Combating Anti-Semitism, which Biden has kept on the books. The order mandates that the Education Department’s Office of Civil Rights (OCR) include Jews in Title VI of the Civil Rights Act, which prohibits federally funded programs, including public universities, from discriminating on the basis of race, color or national origin.

The order also requires government officials to consider a widely used working definition of antisemitism, from the International Holocaust Remembrance Alliance (IHRA), when adjudicating Title VI antisemitism allegations. The expanded version of the definition says that certain criticisms of Israel — such as calling it a racist endeavor — cross the line into antisemitism.

The uncertainty brought on by the delays comes as Jewish students across the country have faced what they and Jewish communal officials say is a hostile campus atmosphere. At the same time, the executive order sparked debate over the limits of political speech on campus, including when and whether criticism of Israel should be treated as antisemitism.

In spring 2020, about five months after Trump signed the executive order, his administration’s Education Department said it would issue proposed regulations to enforce the order. The regulations were initially set to be issued in September 2020.

But that month came and went, and that fall, another announcement pushed the expected issuance date three months to January 2021, the chaotic month when the administrations transitioned. The Biden administration has stretched out the delays nearly two years beyond that date, and added that the proposed regulations would also address another executive order focused on racial equity. The Education Department first pushed the proposed regulations to January 2022, and then delayed them 11 more months — to this coming December.

Despite the successive delays, Jewish leaders are hopeful that the regulations will arrive — but some worry that officials aren’t taking the issue seriously enough. Others say the delays are natural in an administration’s first year, noting that Assistant Secretary of Education for Civil Rights Catherine Lhamon, who heads the OCR, was confirmed only in October.

“Catherine Lhamon has been very receptive to our concerns,” Mark Rotenberg, Hillel International’s vice president of university initiatives and legal affairs, told eJP. “The OCR leadership has been very attentive to the requests and positions of the Jewish community leaders.”

He added, “One of the things that we are very keen on is the passage of a new federal regulation that would be codified [and] that would specifically call out the protections embodied in other documents over many years for Jewish students under Title VI.”

Jewish leaders said they were encouraged by a December video meeting they had with Lhamon. The meeting included representatives from a long list of major Jewish groups — including the Conference of Presidents of Major American Jewish Organizations, Hillel International, the Louis D. Brandeis Center for Human Rights Under Law, the Anti-Defamation League, B’nai Brith International, The Jewish Federations of North America (JFNA) and more. Jewish groups also met earlier in the year with another official from OCR.

“We do have the sense that she’s taking this seriously, and we welcome the communication that we’ve had with her,” Eric Fusfield, B’nai Brith’s director of legislative affairs, who spearheaded the meeting, told eJP. “We hope that some of these complaints will be acted on, that the department will address its caseload and that they will use their influence to project the urgency of fighting antisemitism and use whatever tools they have in their toolkit to combat the problem.”

In a statement to eJP, an Education Department spokesperson did not address the delay in the proposed regulations, but said that in January, “OCR opened multiple investigations into allegations of discrimination based on shared Jewish ancestry at postsecondary institutions.” The spokesperson said that as a policy, OCR does not discuss the details of the investigations, but said the office had released resources to schools that discussed antisemitism.

Some Jewish leaders active in fighting campus antisemitism — including Lhamon’s predecessor in the position, Kenneth Marcus, who was appointed by Trump — want the department to do more. Marcus said that under Trump, the initial delay in issuing the proposed regulations was due to a backlog at OCR, and that that could be the case under Biden as well.

But he said the 11-month postponement is nonetheless concerning, and added that the OCR under Trump took other public actions to stress that it was prioritizing campus antisemitism, like speaking out on the issue in public forums and issuing detailed guidance on the executive order.

“This might simply be a reflection of the agency’s significant workload, and frankly December 2022 is not that far away,” said Marcus, who served as assistant secretary of education for civil rights from June 2018 to July 2020. “On the other hand, coming at the end of a year in which we saw record levels of antisemitism, it is not a great look for the administration to be delaying its work on antisemitism.”

Marcus also founded the Brandeis Center, which opposes the movement to boycott Israel and has filed several Title VI complaints on behalf of Jewish and pro-Israel students.

“I believe that Assistant Secretary Catherine Lhamon is sincere about wanting to address antisemitism and that she has some understanding of the huge problems that Jewish students are facing,” he said. “She can use the bully pulpit in a lot of different ways. She can make speeches. She can issue statements.”

Jewish groups are pushing the adoption of regulations in part out of concern that Trump’s executive order may be rescinded in the future, or that the Department of Education could stop using the IHRA definition as a reference. While the definition has been adopted by a broad range of countries, international bodies, universities and even sports teams, it has drawn opposition from pro-Palestinian activists and others. Some supporters of Israel, including the Reform movement, are wary that it will have a chilling effect on free speech if codified into law. Kenneth Stern, the lead drafter of the document, has also advocated in recent years that it not be given legal force.

“J Street opposed the [executive order] when it was issued as a misguided and harmful effort to declare a broad range of nonviolent campus criticism of Israel to be antisemitic,” Debra Shushan, director of government affairs for the liberal Israel lobby J Street, told eJP. “We urge President Biden to rescind the EO, not issue federal regulations that would render it permanent.”

The administrations of former President Barack Obama and former President George W. Bush had also both extended Title VI protections to Jewish students, and had endorsed predecessors to the IHRA definition. But Trump officially linked the definition with Title VI complaints, bringing it to bear on college campuses that are often flashpoints of debate over Israel and Zionism.

“Since an executive order could be revoked in the future… DOE’s potential rulemaking was welcome as a way to cement the use of the IHRA definition of antisemitism in Title VI protections, sending a clear message to universities and other education centers that benefit from federal funding that the Biden administration takes seriously evolving and growing threats of antisemitism,” a Jewish official familiar with the meeting with Lhamon told eJP.

Leading up to Biden’s inauguration, both the Conference of Presidents and Jewish Federations of North America urged him to adopt the IHRA definition, which his State Department did fewer than two weeks after taking office. Trump’s executive order is still in effect, even as Biden has worked to reverse a range of Trump’s other policies.

Carly Gammill, director of the StandWithUs Center for Combating Antisemitism, told eJP, “We are not aware of the criteria or definitions shifting in any way, including any way that would affect Title VI complaints.” But she and others said they’d still like faster action on Title VI complaints, in addition to public signals from the OCR that it’s not leaving antisemitism by the wayside.

Adam Teitelbaum, the executive director of JFNA’s Israel Action Network, said the OCR should “make clear that protecting Jewish and pro-Israel students from antisemitism and harassment or worse is a top priority, and that the department fully supports the use” of the IHRA definition.

Given what he’s heard from OCR officials, in addition to the State Department’s adoption of the IHRA definition, Conference of Presidents CEO William Daroff said he’s “cautiously optimistic” that the definition will remain part of Title VI proceedings as well.

“If the administration is encouraging foreign governments and international organizations to adopt the IHRA definition with their right hand, it would be pretty complicated for them with their left hand to state the exact opposite” regarding college campuses, Daroff told eJP. “At the end of the day, we want to protect Jewish college students, and this is the process in place to ensure that they’re protected.”