Lynda and Stewart Resnick created a $1 million fund that aims to inspire students to do community service by providing up to $500 for each of the first 2,000 graduates from the 2020 and 2021 classes at California State University, Fresno who complete two days of service with nonprofits in their communities. Co-owner of POM Wonderful, most known for its distinctively shaped bottles of pomegranate juice, Lynda Resnick announced the fund during her commencement address to the graduating classes last week.

The arts sector saw some hiring in April, but education experienced losses, according to new estimates from Johns Hopkins University’s Center for Civil Society Studies. While the arts gained back 2.2% of the estimated 830,000 jobs that have disappeared since the start of the pandemic, schools and other educational organizations lost 14,000 jobs in April.

In the broader economy, job losses leveled out but did not reverse. About 9.8 million workers are unemployed, compared with 5.7 million before the pandemic.

The Silk City Benevolent Association Cemetery in Woodland Park, N.J., was rededicated on Sunday after a two-year cleanup that raised downed gravestones and removed tree stumps sitting in the middle of graves. The organization that raised money for the refurbishment maintains 17 burial grounds in Bergen and Passaic counties, including three others in close proximity to one in Woodland Park.

Reboot, the nonprofit network of artists and other creatives who explore and rethink Judaism, has been churning out ideas like “Sukkah City,” an architectural design competition that showcased wildly reimagined ritual booths, since the early 2000s. Now, as it implements its new strategic plan, the group is shifting focus to emphasize the rapid development of a greater number of ideas, David Katznelson, the group’s CEO, told eJewishPhilanthropy.

A meditative experience: On the first night of Shavuot, May 16, Reboot drew more than 30,000 people to “Dawn,” an online version of that holiday’s traditional all-night study fest. It featured three streams of programming — one provided mainly by artists, one by rabbis and one an eight-hour piece of music — itself is a reboot of an earlier iteration, said Katznelson, a creator of the original event, held in 2010 at the California Academy of Sciences in San Francisco, at which about 5,000 people attended film screenings, live music, comedy, discussion and lectures.

Pushing for impact: “We try to create things within Reboot that will ripple out into the broader culture,” said Tiffany Shlain, an attendee of the first Reboot conference in 2002, whose film “The Tribe,” an exploration of American Jewry through the lens of the Barbie doll (which was created by a Jewish woman), was in part inspired by Reboot, as is her most recent project, the book 24/6: The Power of Unplugging One Day a Week. Reboot is changing — because that’s the nature of creativity — but there’s continuity, too, she said.

In light of the new Pew Study, it’s time for Jewish leaders to make amends

“According to Pew, ‘Around nine-in-ten Jewish American adults (92%) identify as non-Hispanic White, while 8% identify with other racial or ethnic categories. Among Jews ages 18 to 29, however, the share who identify as a race or ethnicity other than non-Hispanic White rises to 15%.’ Nearly 30% of Jewish adults under the age of 30 live in households with at least one person that is Black, Hispanic, Asian, or another ethnicity, writes David Bernstein in an opinion piece for eJewishPhilanthropy.

Last May: “Just over a year ago, two highly respected Jewish demographers, Ira Sheskin and Arnold Dashevsky, wrote an essay in the pages of eJewishPhilanthropy arguing that a recent survey commissioned by the Jews of Color Field Building Initiative almost certainly inflated the numbers of Jews of Color. Sheskin and Dashevsky were social scientists doing social science. Their fealty is not to a cause, but to the truth. And for being good social scientists they were publicly pilloried and labeled racists by many in the Jewish community they had served for their entire careers.”

Fast forward: “Now comes the new Pew Study eight years after the first, which indicates that Jews of Color now make up 8% of the community. I interviewed Ira Sheskin, the first time he has spoken on the record since the fiasco. ‘The 8% (cited in the Pew study) is about what we would expect given the 6% seven years ago…there’s some rounding errors in both of those numbers.’ … The current Pew study absolutely vindicates Sheskin and Dashefsky’s report on the numbers of Jews of Color.”

“Most of our creativity and energy seems to be dedicated to form rather than content, to technology rather than ideas,” writes Andres Spokoiny in an opinion piece for eJewishPhilanthropy.

Avoidance: “For decades, we masked the dearth of ideas with a flurry of engagement and ‘identity building’ programs. We responded to the perceived (and real) threats of assimilation by creating ‘gateways’ to Jewish life, but we ended up treating those gateways as goals unto themselves—doors to nowhere—rather than first steps towards more demanding content and richer meaning. The new spiritual communities that are emerging in many parts of North America (think of the ‘emergent network’) have failed, so far, to produce a new comprehensive set of ideas about what is Judaism, what is God, what is the Jewish people and so forth.”

Hope: “In this barrenness of ideas, there is nonetheless good news. One particular movement, incipient as it may be, gives me special hope: The re-emergence of Jewish journals of ideas. In the last few months, a number of journals have come out; in them, people can discuss ideas in long format, without the tyranny of the 800-word limits (or, worse yet, 280 characters!). Notable among them are the new journal of the Shalom Hartman Institute and Sapir, the journal of ideas published by the Maimonides Foundation. Other organizations, like Hadar, are also producing insightful and deep materials. Moment Magazine’s symposia are also remarkable.”

Yearly Peak: The American Muslim Community Foundation, the only foundation nurturing giving circles that focus on that community, distributed nearly $1.3 million to 150 charities, a record amount, during the month of Ramadan, Haleluya Hadero reports in the Chronicle of Philanthropy. While most of that amount came from the donor-advised funds of Muslim families, giving circles that receive the foundation’s help with administration and vetting donors are an increasingly popular form of philanthropy in the community. “We have a WhatsApp group, and usually during a month of Ramadan you see an insane influx of people messaging us,” said Sahina Islam, founder of Ummah Giving Circle. [ChroniclePhilanthropy]

Been There: In The New York Times, David Gelles interviews Lynn Forester de Rothschild, a self-made woman who married into the banking dynasty and now works to reform the economic system from within as the founder of the Coalition for Inclusive Capitalism. After coming of age at a white-shoe law firm at a time when corporate American believed creating value for shareholders would benefit society as a whole, Forester de Rothschild slowly realized the inequitable distribution of wealth created by that mindset was wrong. “Who’s to say that there shouldn’t be a government policy that prices the negative externalities that companies cost the taxpayer?” she asked. [NYT]

Matriarch: In Bloomberg, Felipe Marques and Benjamin Stupples spotlight Joseph Safra’s 68-year-old widow Vicky, “now the guardian of the vast Safra fortune, built over 180 years across three generations and four continents, making her one of the wealthiest women on the planet.” [Bloomberg]

Look Again: As museums across the country reopen, they are juxtaposing new works and programs with their permanent collections in order to foster dialogue about questions about race and culture, writes Peter Astrid-Kane in The Guardian. At San Francisco’s Legion of Honor, a museum whose permanent collection boasts European masters such as Rodin, the Kenyan artist Wangechi Mutu’s work “I Am Speaking, Are You Listening?” has been installed throughout the exhibition space as both an artistic expression in its own right and a counterpoint. “You cannot help but think about the ideological context in which this museum is positioned,” said the “I Am Speaking” curator, Claudia Schmuckli. “It has a completely different resonance when it is confronted with these sculptures.” [Guardian]

Location, Location: In Inside Philanthropy, Ade Adeniji surveys the real estate industry’s top philanthropists, finding that many property magnates, such as Sam Zell, Sheldon Solow and the Goldman family, have built up their philanthropy in the same places they built their fortunes. Sheldon and Miriam Adelson launched the Adelson Educational Campus, the biggest Jewish school in Las Vegas, while Sam and Helen Zell’s giving focuses on Chicago. “Nonprofits recognize us as being very serious in our funding and having high expectations,” said Marvin Ausherman, whose family foundation is based in Frederick, Md. “They know when we offer grants, they need to utilize it as they intended. We also offer grantees advice, help with strategic plans and nonprofit governance.” [InsidePhilanthropy]

The Center for High Impact Philanthropy at the University of Pennsylvania, with the support of the Tara Health Foundation, created “The XX Factor: A Comprehensive Framework for Improving the Lives of Women & Girls,” the first evidence-based framework to guide efforts in the space… The Chan Zuckerberg Initiative announced a first round of racial equity grants… The Met Council opened a new social service hub in Borough Park… Efi Cohen, co-founder of Datorama and CEO of Salesforce Israel’s R&D center, thinks equal representation in tech will foster coexistence… Google is bringing forward the arrival in Israel of its Google Pay app… Marv Albert announced he will retire at the conclusion of the NBA playoffs…

Author of 26 novels that have sold over 40 million copies in 34 languages, Jodi Picoult… 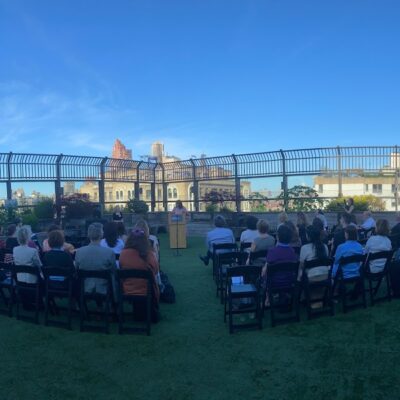