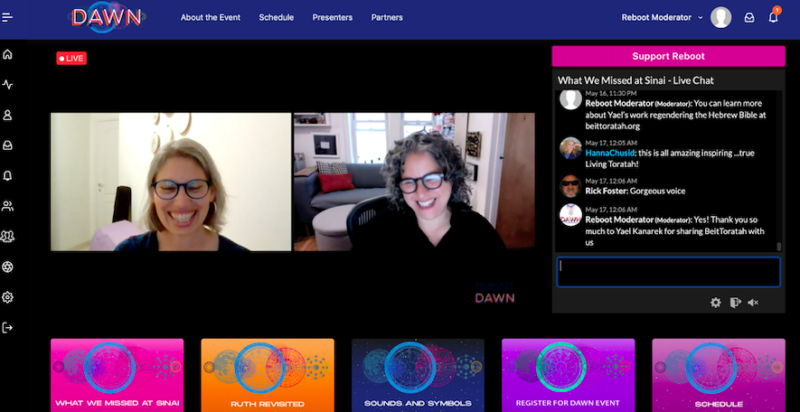 Reboot, the nonprofit network of artists and other creatives who explore and rethink Judaism, has been churning out ideas like these since the early 2000s. Now, as it implements its new strategic plan, along with a rebrand and its first new logo, the group is shifting focus. From the perpetual ownership of blockbuster projects like “Sukkah City” it will emphasize the rapid development of a greater number of ideas in an incubator to be called “Reboot Studios,” and the spinoff of the most successful to partner organizations.

“Instead of one or two projects a year, we’re thinking of ourselves as [a research and development] platform developing tons of ideas,” said David Katznelson, the group’s CEO.

On the first night of Shavuot, May 16, Reboot drew more than 30,000 people to “Dawn,” an online version of that holiday’s traditional all-night study fest. It featured three streams of programming — one provided mainly by artists, one by rabbis and one an eight-hour piece of music — itself is a reboot of an earlier iteration, said Katznelson, a creator of the original event, held in 2010 at the California Academy of Sciences in San Francisco. About 5,000 people attended film screenings, live music, comedy, discussion and lectures.

Founded in 2001 by a group of young Jews, including Rachel Levin, who helped Spielberg create Righteous Persons Foundation and now serves as a senior advisor there, Reboot’s network now consists of over 600 members, all of whom have attended the group’s annual conference in Park City, Utah, after being anonymously nominated by other members. About 36 new members join every year. Levin also played a role in creating Jewish Story Partners, a film fund supported by Righteous Persons Foundation and the Maimonides Fund, announced in April.

Righteous Persons Foundation is still one of Reboot’s major donors, along with the Jim Joseph Foundation, the Joyce and Irving Goldman, Covenant and William Davidson foundations; Charles and Lynn Schusterman Family Philanthropies and CANVAS, the arts collaborative that operates under the auspices of the Jewish Funders Network.

In the last three years, the group or its projects have been involved in events that have engaged more than 4 million people, Katznelson said.

“We try to create things within Reboot that will ripple out into the broader culture,” said Tiffany Shlain, an attendee of the first Reboot conference in 2002, whose film “The Tribe,” an exploration of American Jewry through the lens of the Barbie doll (which was created by a Jewish woman), was in part inspired by Reboot, as is her most recent project, the book 24/6: The Power of Unplugging One Day a Week. Reboot is changing — because that’s the nature of creativity — but there’s continuity, too, she said.

Other Reboot members include Anne Wojcicki, a founder of 23andMe, and Joey Soloway, whose Amazon series “Transparent” about a Jewish family led by a trans woman, was influenced by Reboot, Katznelson said.

Growing up, Katznelson had never celebrated Shavuot, but the idea of underrated Jewish holidays arose during a meal with Levin. (Milton Berle, the comedian born Mendel Berlinger, was eating at a nearby table at Nate ’n Al’s, the Beverly Hills deli, during Hanukkah of 2001.) Levin mentioned Shavuot. Years later, “Dawn” was born, then reborn online in the beginning of the pandemic.

Pandemic permitting, Reboot envisions a new era of in-person gatherings, Katznelson said. The group is currently working on a Hanukkah event built around a holiday album and a live performance that will also be streamed online.

The group’s projects bubble up from the network, Shlain said, citing as an example “Plastover,” this past year’s Passover-themed call to eschew single-use plastics, at least for the eight days that bread and other forms of hametz are forbidden. The idea emerged at one of the weekly check-ins the network has been holding over the course of the pandemic, was formally pitched to the group and was brought back again for more conversation. Ultimately, it became a set of digital tools — The Ten Plagues of Plastic — to help individuals, congregations and communities reduce their plastic consumption.

“Now that Reboot has quite a number of years under its belt, we are better able to grow these projects,” said Jamie Kantrowitz, chair of Reboot’s board of directors and an entrepreneur and investor who has advised corporations and politicians on web strategy. “Things would emerge from the community and take shape over years. We’ve done that enough so that now we can identify the projects that can scale.”

“It’s hard to talk about what future events will look like and feel like, but between the next ‘Plastover,’ the next ‘Dawn’ and an ‘Ideas Festival,’ we’ll be experimenting with large gatherings that also have an online component,” Katznelson said. Reboot is talking with Hillel International; CANVAS, the arts collaborative hosted by the Jewish Funders Network, and the Jewish Emergent Network of seven independent Jewish communities that work together, about partnering on these events.

During the pandemic, Reboot decided to keep its budget flat, at about $1.9 million, according to its most recent tax filing. Now it’s seeking increased investment to realize the goals of the 2019 plan, he said.

Unlike the current website, a landing page for Reboot, the new one will host fresh articles and videos two to three times a week. It will also sit at a new URL — Rebooting.com. The new logo, created by a Reboot member, Stephen Goldblatt and the Partners in Crime creative agency, will feature an animated “B” and “O.”

“Reboot is like Judaism itself, always evolving,” Shlain said. “It does feel like we’ve been entering this new era.”