With small payments, Repair the World hopes to allow lower-income Jews to also serve those in need

Requests for economic assistance can range from the maximum amount to $50 for a one-time expense. 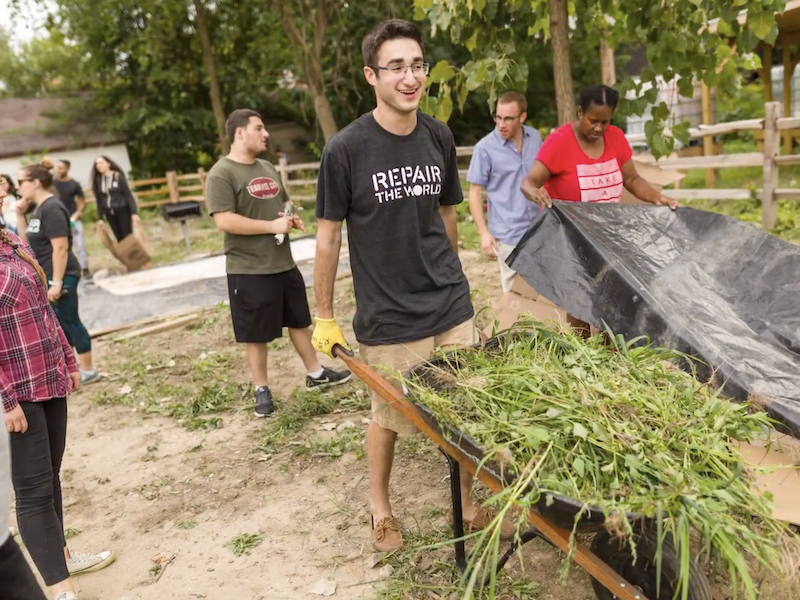 A Repair the World participant at work.

Arnold Lau, a 26-year-old freelance actor based in New York City, felt that the two months he spent volunteering with the Jewish service organization Repair the World between March and May 2022 were invaluable. Crucially, for him, the experience was also affordable.

Repair placed Lau with Commonpoint Queens, a food pantry where he helped distribute groceries to people in need, work that gave him an opportunity to connect with people in his borough. He would not have been able to do the work, which came with a stipend of $1,250, without being one of the 135 service volunteers, fellows and staff who received additional financial assistance on top of that from Repair. Lau received another $700 in economic assistance, for a total of nearly $2,000.

“I like to work in community and I’m trying to figure out ways I can fix every neighborhood, so that’s what I enjoy about it,” Lau told eJewishPhilanthropy. “The stipend also helped me pay for my acting classes and save some money to be able to make payments on my student loans.”

Repair began providing economic assistance, beyond the stipend, to volunteers, fellows and staff in 2020, after starting a part-time service corps that summer to meet the needs both of local organizations that were short of volunteers and young people who wanted to serve during the pandemic, Kate O’Bannon, Repair’s chief strategy officer, told eJP.

“All 100 of [the volunteers] said that they needed the stipend,” says O’Bannon. “And the majority of them also requested an additional economic access fund piece, which said to us that it was important, that even though folks were giving of their time, that they did need some sort of funds to be able to reduce the economic barriers that were coming into play.”

Repair’s financial assistance is inspired by Avodah, a Jewish service group whose flagship program places young Jews in one-year positions at anti-poverty nonprofits around the country. Avodah created an Economic Accessibility Task Force in 2018, which made its program accessible to those who wanted to serve but may not have had the financial resources to immerse themselves in a year of service work, said Avodah CEO Cheryl Cook.

“For people to take a year out of the full-time paid salary job market to spend a ton of time as a full-time [stipended] volunteer is actually a privilege that some of us can do, but not all of us,” she told eJP.

Avodah’s Economic Access Fund, which started out as a $10,000 line item in the 2018-2019 fiscal year budget “for non-discretionary expenses” such as winter clothing and deferment of student loans, has more than tripled over the last three years. In the 2021-2022 fiscal year, out of an Economic Access Fund budget of $35,000, Avodah has already disbursed nearly $31,000 to 39 participants.

O’Bannon said Repair also expanded its economic aid last August, which it says is “for full-time fellows, part-time service corps members and any staff impacted by injustice.” The fund provides support for needs including transportation, housing and winter clothes for service in colder locations.

“As we looked out into both the Jewish world and then also the much broader secular service world, there were not many funds like this that existed that we could learn from,” O’Bannon said. “I aspire for many of our organizations just to be thinking about creative ways to make Jewish life and Jewish service accessible to a much broader audience.”

Lau said the additional assistance from Repair’s fund helped him pay for additional unforeseen expenses that came up while he worked for Commonpoint Queens, which he called “a real gift.” The program’s flexible work schedule also meant that he could keep his part-time job at an Amazon fulfillment center.

In addition to helping fellows make ends meet, Cook said Avodah’s fund also fosters trust and accountability in the program by facilitating difficult but open conversations about money between Avodah staff and potential corps members who identify their own needs for financial support.

Through Repair’s service corps, Lau has learned to better engage with and support others, and has gained leadership and technological skills that he hopes to highlight when applying for jobs.  As someone who has autism spectrum disorder and ADHD, he appreciated the welcoming and supportive team at Commonpoint Queens, including his sponsor coordinator, who he said was  “like a mom” to him.

Although she’s proud that Repair has replicated Avodah’s model, Cook would like to see “a field-wide conversation about economic access” among Jewish groups, led by those with lived experience of economic hardship.

“I would like to have our Jewish community make it a priority for us to see this as a serious issue that we need to tackle,” she said.