Three founders of the Genesis Philanthropy Group, under sanctions, resign from its board

GPG had taken steps to indicate its opposition to the invasion, donating $10 million to the relief of Ukrainian Jews in the war's early days. 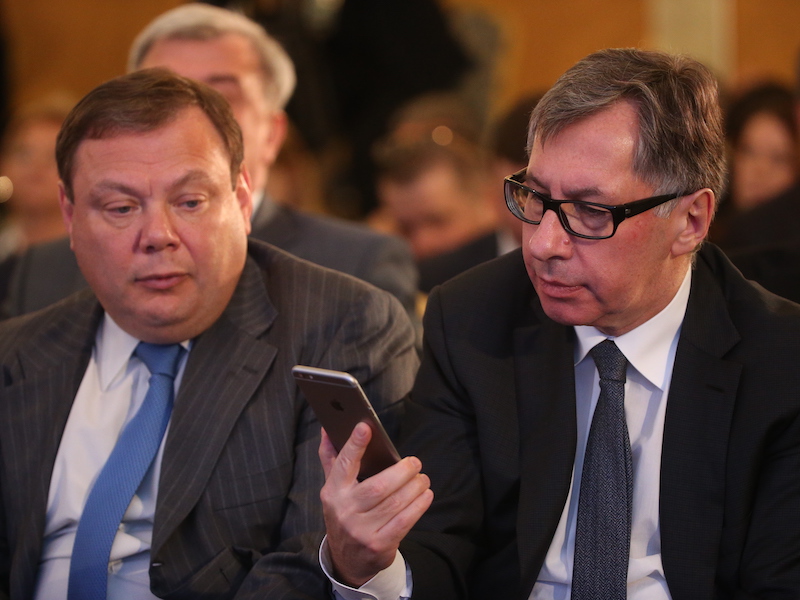 Mikhail Fridman (L) and Pyotr Aven (R) attend a conference in Moscow in 2017.

Three founding members of the Genesis Philanthropy Group (GPG), a Jewish charitable foundation established by moguls from the former Soviet Union, have resigned from the foundation’s board after they were placed under sanctions due to their associations with Russian President Vladimir Putin.

The group announced the resignations of the three men — Mikhail Fridman, Petr Aven and German Khan — in an email on Friday. All three are on a lengthening list of Russian billionaires sanctioned by the European Union and United Kingdom due to their relationships with Putin, in retaliation for Russia’s invasion of Ukraine that began nearly a month ago.

“Since our founding, Mikhail Fridman, Petr Aven and German Khan have been the drivers of our ability to strengthen Jewish engagement around the world, and each is personally, deeply passionate about a bright Jewish future,” read the email, signed by GPG Chairman Gennady Gazin and CEO Marina Yudborovsky. “In order to assure the ability of GPG to stay true to its mission and build on the foundation we have created over the past 15 years, all three have resigned from the Board of Directors.”

On Wednesday, Khan also stepped down from the board of German oil company Wintershall Dea due to the sanctions.

GPG had taken steps to indicate its opposition to Russian moves, donating $10 million to aid Ukrainian Jews in late February. Fridman spoke out at that time against the invasion, writing in a public letter, “This crisis will cost lives and damage two nations who have been brothers for hundreds of years. While a solution seems frighteningly far off, I can only join those whose fervent desire is for the bloodshed to end.”

GPG likewise wrote its email that it is “horrified by the war in Ukraine and dismayed by the needless loss of life and destruction the continued fighting is inflicting on the region.”

On Thursday, Fridman told Bloomberg Businessweek that he does not believe the sanctions will help stop the war. “If the people who are in charge in the EU believe that because of sanctions, I could approach Mr. Putin and tell him to stop the war, and it will work, then I’m afraid we’re all in big trouble,” he said.

GPG’s donation to Jewish humanitarian relief is not the only donation made by a Russian Jewish billionaire in recent weeks. Roman Abramovich, the owner of British soccer team Chelsea FC, announced a large donation to Yad Vashem on Feb. 22, two days before the invasion began. Yad Vashem suspended the partnership when Abramovich was hit with sanctions last week.