The museum’s goal is to share the story of hunger in America, from the Gilded Age to the present. 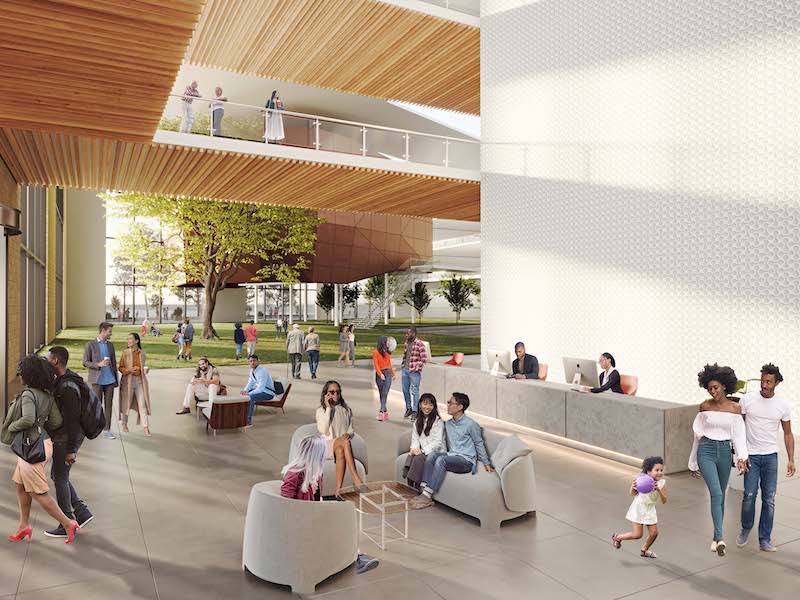 A rendering of the lobby of Mazon's virtual Hunger Museum.

Visitors to the Hunger Museum, which is slated to open next year, will see photographs, newspaper accounts and videos that document and provide context around the challenges of poverty, hunger and government policy.

At the museum’s SNAP Cafe, visitors can assemble a meal by choosing one ingredient from each of five categories (grains, proteins, fruit, vegetables and dairy). Once they check out, they find out whether or not their meal would be fully covered by the average budget for a meal under Supplemental Nutrition Assistance Program (SNAP) — the government’s principal food assistance program. Most of their planned meals would exceed the daily per-meal quota.

Another feature, called the Wishing Tree and based on an idea of Yoko Ono’s —  gives visitors an opportunity to express  their hopes about hunger. From the museum’s grounds, a beautiful view of the Washington Monument is visible.

But visitors don’t need to fly, ride a bus or walk to experience this museum — or worry about parking or overcrowding in the galleries. Instead, the Hunger Museum, set to open next year, will be all-virtual, and built in cyberspace by the nonprofit Mazon: A Jewish Response to Hunger to be accessible to anyone with a screen. The more than 120 attendees at Mazon’s annual gala on Thursday night got a preview of some of the museum’s rooms.

Broadly, the museum’s goal is to share the story of hunger in America, from the Gilded Age to the present, with visitors from around the world. It hopes to provoke conversation about the impact of social, cultural, economic and political changes on hunger and the government’s responses to it.

While many organizations have returned to in-person galas and fundraisers, Mazon felt that a virtual gala — which they called “The Comfiest Seat at the Gala” — would better match the activity of touring the virtual museum.

“We wanted to make the story as accessible as possible to immerse you in the people and places, the policies and the possibilities and the history of hunger in America for the last 100 years,” Abby Leibman, the president and CEO of Mazon, told guests at the gala. “It’s so very important that we never forget that these are real people who have terrible challenges, who look to their leaders for support, relief and help. And when those leaders responded, literally millions of lives were made better and a better future was also possible. And when leaders began to turn their backs on people to shame them — even to blame them — the safety net was shredded, and people again found themselves struggling.”

The idea for the museum began in the latter half of 2018, as a proposal for a physical artwork — a gigantic timeline that could be displayed in synagogue lobbies and school classrooms.

“We wanted to showcase for the Jewish community and the broader American public that we believe it’s possible to solve hunger in America, because we almost did it once,” Naama Haviv, Mazon’s vice president of community engagement, told eJewishPhilanthropy. “According to household surveys in 1969, we reduced hunger to 3% of the American population – how did we get there, and how did the systems we built break down so completely that we now have nearly 40 million people struggling with hunger?”

Mazon saw the virtual format as both a need and an opportunity, Haviv said. “Creating a virtual resource not only meant it would be accessible to a vastly broader audience than if we produced something physical,” she said. “With a virtual museum there’s nothing stopping us from adding new exhibits and even whole new wings if we want to in the future – and as the story of hunger in America shifts and changes, we can reflect that in our exhibits.”

The Hunger Museum is one of the first fully virtual museums without a bricks-and-mortar counterpart; another virtual art museum, VOMA, uses 3D and virtual reality-esque technology to showcase artists from all over the world in one space.

Mazon reaches thousands of people in the Jewish community every year through hunger education and outreach work via a network of hundreds of synagogues, Jewish schools, JCCs and other community organizations. The organization also works with government officials to shape policies addressing hunger, and its representatives were present at a recent White House conference on hunger.

Mazon’s staff is still tallying totals and incidentals, but Haviv said that its virtual gala cost less than half of what it costs to do an in-person gala. The organization’s previous gala — which became virtual because of last year’s Omicron surge — was on track to cost around $100,000.

Several days before last week’s gala, registered guests received a priority mail box filled with smaller boxes, each bearing instructions cautioning attendees not to open them until the night of the event.

The box labeled “Introduction” contained two champagne flutes decorated with the museum’s logo; “Bits and Bobs” contained a valet ticket, an unbranded napkin guests were asked to decorate, a table number and a stand; “Dinner” had a packet of vegetable seeds and a chicken squeeze toy; and “Closing” included cookies and coffee candies. The idea was to replicate the various stages of attending an in-person gala:  from appetizers to  waiting in line for cocktails to making small talk with other guests (in this case, in a Zoom breakout room) to a “rubber chicken” dinner. Celebratory beverages were not provided.

At the gala, musical duo Marnina Schon and Michael O’Konis entertained with violin, guitar and song, sharing an original ditty about the museum with a cheery refrain stressing its virtual nature, hammering that point home with a comedic folk earworm.

The gala also included less lighthearted moments, such as the personal story of  honoree Marcie Zelikow, who struggled to keep food on the table when she was a newly single mother.

Mazon, whose budget for this fiscal year is $8,350,000, works through advocacy and public policy, aiming to end hunger by changing systems and eliminating barriers to accessing nutritious food. Mazon does not directly provide food to hungry people, but through its educational programs and position papers “impacts every single one of the 37 million Americans – and the 26% of the Israeli population – that are currently struggling with hunger,” Haviv said. The organization places a particular focus on overlooked populations and problems, including hunger among military families, veterans, single mothers, Native Americans and LGBTQ seniors.

Haviv told eJP that individual Mazon donors — most of whom, she said, want to remain anonymous — have fully funded the museum’s startup costs of  $200,000.

“There are always more stories to tell,” she said.