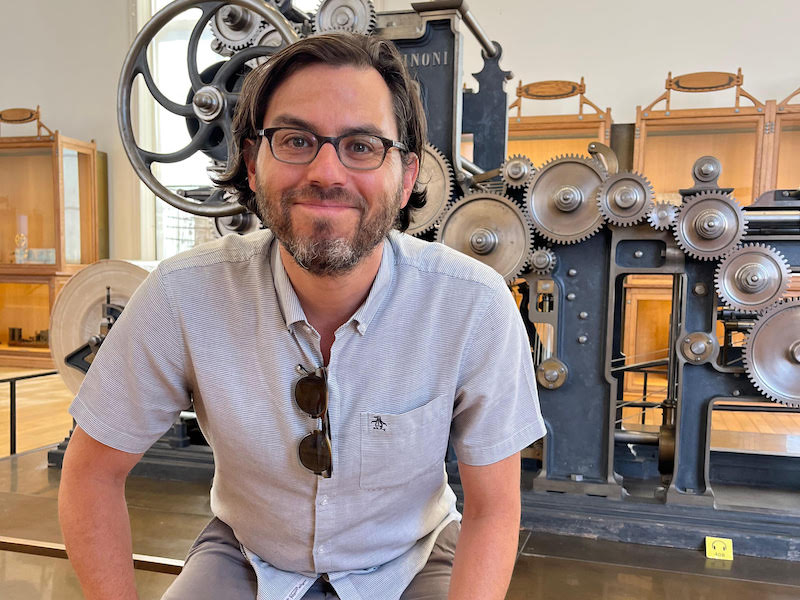 If you’ve paid any attention to the seemingly endless stream of efforts to reinvent Judaism in the last decade or so, odds are you’ve encountered a project of Joshua Foer’s.

The 40-year-old author and entrepreneur is part of the team behind a series of initiatives: Sefaria, the popular digital library of Jewish texts, where he serves as board chair; Atlas Obscura, the online magazine cataloging unusual travel destinations; and Sukkah City, the 2010 art installation in New York City’s Union Square that reimagined what a sukkah could look like and represent.

Recently, he embarked on two new projects: The Lehrhaus, a bar-cum-Jewish study house in the Boston area he co-founded with Rabbi Charlie Schwartz, and Leviathan Productions, which he co-founded with producer Ben Cosgrove, with the aim of producing TV shows and films telling Jewish stories.

He’s also on the board of the Jim Joseph Foundation, which funds both Sefaria and the Lehrhaus.

Before Yom Kippur, eJewishPhilanthropy’s Ben Sales spoke via Zoom with Foer, who was wearing an Atlas Obscura T-shirt, to talk about the Jewish nonprofit world, his creative process and goals, and how he pays for all of his ideas.

eJP: I feel like I always see your name popping up alongside new ventures. Between all of them, is there a single organizing principle for you?

I like to learn, and I think that when there are gaps in the landscape that [are] like, “If only this thing existed, it would help me pursue my curiosity better,” my inclination is to try and figure out if there’s a way to solve that problem.

What’s the pathway from thinking of an idea to making it a successful and sustainable initiative?

Sometimes it takes a long time. An idea needs to incubate and gestate and sometimes it’s not ripe yet, and that’s OK. A mistake can be pursuing something before it’s ready. So I’ve got ideas I know are kind of not quite there, but I know they might be there in a few years.

Wth Sefaria, you know, I was feeling a sense of frustration about the fact that in the year 2011, I as a somewhat knowledgeable, but frankly, not that knowledgeable American Jew, wanted to go find the Talmud in English online. The top search results were a pirated copy of the Soncino [translation] as a PDF, an unreadable translation from 1918 and an antisemitic website.

Can you tell me about an idea you had — that you thought was a great idea — that didn’t work?

Just ones that haven’t yet… It’s only a failure if you’re not telling the story through to the end… As long as you’re not giving up, something eventually comes of it.

One of my dreams is to bring back the world’s fair. And if I die without having figured out how to do that, I’ll be unhappy, I won’t have fulfilled my mission here on planet Earth. I’ve tried at various times through Atlas Obscura to seed that… Ultimately Atlas Obscura will organize the Wonder Fair, we’re just not quite there yet. But we will be there.

How do you get all of these ideas funded?

I’m very fortunate that there have been some individuals who have been with me and seen some of my ventures through and who trust me.

For-profit. And I would like to see the Jewish funding ecosystem evolve, move toward becoming more like the funding ecosystem that exists in the startup world. If I had to identify what I believe to be the single biggest source of stasis in our corner of the universe, it is the fact that there is so little meaningful risk capital [for nonprofit ventures] in the Jewish world.

There are certainly places that will write small checks, $30,000 checks, $50,000 checks, but to start a real ambitious venture requires more capital than that — like an order of magnitude more capital. And there aren’t addresses to go to for that kind of real risk capital, whereas there is a whole system in the for-profit world.

For a competent, successful 45-year-old who is not in the Jewish world, who has an idea for transforming the Jewish world — what is the path for them to actually start a new venture with meaningful capital? The answer is, there is no path, and that’s got to change.

Is it possible that your career is a rebuttal to that argument?

Here’s the thing: I have been extremely fortunate to be close enough to the Jewish philanthropic infrastructure to be able to get my projects, my enterprises funded… And even so, with every advantage that an entrepreneur could possibly have in the Jewish space, it’s really, really hard — and far harder than it should be — to raise venture capital.

Why do you think that is?

Where we do have big ideas coming out of the Jewish world — I think of PJ library or Birthright — those are big ideas that actually came with and [were] attached to, and from, the source of capital. We’re kind of reliant right now on our big transformative ideas coming from people who already have access to capital. What we’re missing is entry points for new entrepreneurs to raise capital.

When you’re raising capital for a startup, you put together your pitch, you might spend three months [or] six months raising money, and then you get 18 months to 24 months of runway. Then you’re free to operate. In the Jewish world you’re constantly fundraising. We don’t write big checks and then say, “Go, and come back to us in 24 months, and show us what you’ve got.” You’re constantly fundraising, which means that your customers, the people that you’re focused on serving, end up being people you’re raising the money from as much as the community that you’re trying to serve.

Let’s talk about Leviathan, your new production company. Why do you feel it’s necessary?

We are the People of the Book, we are a nation of storytellers. And yet we seem to be doing a poor job telling our stories these days. Whether you’re talking about antisemitism or Israel or simply how our tradition gets passed on to the next generation, these are all fundamentally questions of storytelling, and it seems to me that we were not maximally leveraging the most powerful storytelling mediums that exist in the world right now, which are film and television.

Isn’t that already happening? There are so many Israeli shows on Netflix.