How Repair the World’s $5.8 million JCRIF grant will work 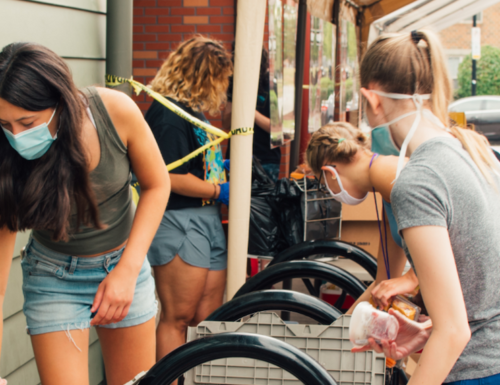 The field of Jewish service — both its reach and its educational depth — appears poised for a once-in-a-generation transformation in the wake of two multimillion-dollar grants to Repair the World. The Jewish service organization, based in New York City, received a $7 million grant from MacKenzie Scott, while the nearly $6 million grant from the Jewish Community Response and Impact Fund (JCRIF) is designed to support not only Repair the World, but also seven partner organizations focused on service opportunities for young Jews.

“It’s not just about lifting up Repair. It’s about lifting up the whole field of Jewish service, and remaking a community that is grounded in service to our neighbors,” Repair the World’s CEO, Cindy Greenberg, said.

Repair the World used Scott and Jewett’s unrestricted gift of $7 million, announced on June 15, as “rocket fuel,” Greenberg said. She launched a listening tour among donors, partners and participants in the organization’s programs.

That tour helped the group refine its proposal for the JCRIF “Reset” grant, for which the funders — Charles and Lynn Schusterman Family Philanthropies; Jack, Joseph and Morton Mandel Supporting Foundation; Jim Joseph Foundation and the Maimonides Fund — allocated $5.8 million over a period of three and a half years.

Both grants will fund a little more than half of the $23 million budget for the plan to grow Repair the World sufficiently to support a national Jewish service program that will reach 200,000 participants over the next three and a half years. Efforts are underway to raise the remaining funds, Greenberg said.

Additional plans for how to spend the Scott-Jewett gift will be finalized at Repair the World’s December board meeting. The funders originally created JCRIF to protect Jewish institutions during the early days of the pandemic, and then developed the Reset grant program in the hope that Jewish organizations could channel the turbulence of the pandemic era into innovative plans for the coming years.

In the call for proposals, the funders emphasized that they wanted to see collaborations between groups, and every project funded by the Reset grants is a collaboration of some kind. Repair the World’s grant boasts the most partners: Hillel International, Honeymoon Israel, JCC Association of North America, JDC Entwine, Jewish Federations of North America (JFNA), Moishe House and OLAM.

The funding will go to Repair the World, which will further disburse designated amounts to the partner groups according to a plan they created together.

The grant aims to build on the foundation Repair the World established during the pandemic when it created the Jewish Service Alliance (JSA) with more than 40 organizations to provide service opportunities that responded to COVID-19 needs. Last year, 36,675 people participated in JSA service and learning programs, Greenberg said. The JSA operates in Atlanta, Baltimore, the Bay Area, Boston, Brooklyn, Chicago, Cleveland, Detroit and Colorado.

“We’re going to extend our reach and deepen the service experience,” Greenberg said, although it’s too soon to say which new locations Repair the World might enter.

“Gen Z is the most civically engaged generation alive, and they’re looking for ways to live their Jewish values,” Greenberg said.

Repair the World and the partner organizations have identified the ways in which they will work together, although many details are still being worked out. Repair the World already works with Hillel International and Moishe House, and will grow the number of participants in those programs.

“Our participation in the Jewish Service Alliance represents Hillel’s most significant and far-reaching partnership in the social impact arena,” said Hillel CEO Adam Lehman, noting that its network of campus service interns will grow from 100 to 150 with support from the new grant.

Moishe House will also hire an educator who works specifically on Jewish service. Repair the World and Honeymoon Israel, a provider of Israel travel programs for new couples, will offer service opportunities to those couples upon their return to the United States. Through JFNA, Repair the World will train federation professionals on how to create meaningful service programs.

“A big emphasis of the grant is that we want to move from service that’s inspired by Jewish values, to service that is a meaningful Jewish educational experience,” Greenberg said.