Shouldn’t we aspire to reach beyond mere tolerance? Could our community be strengthened by learning to appreciate difference, even if we still disagree?

There is exactly one home-away-from-home for all Jewish students at UCLA: Hillel. That sounds beautiful, and it is. We often buck the trend of political division and hyperpolarization with hundreds of students from every perspective and identity “doing Jewish” together.

But it’s certainly not Kumbaya all the time. Our community engages in impassioned arguments, and students increasingly experience hurt and alienation when opposing sides collide. 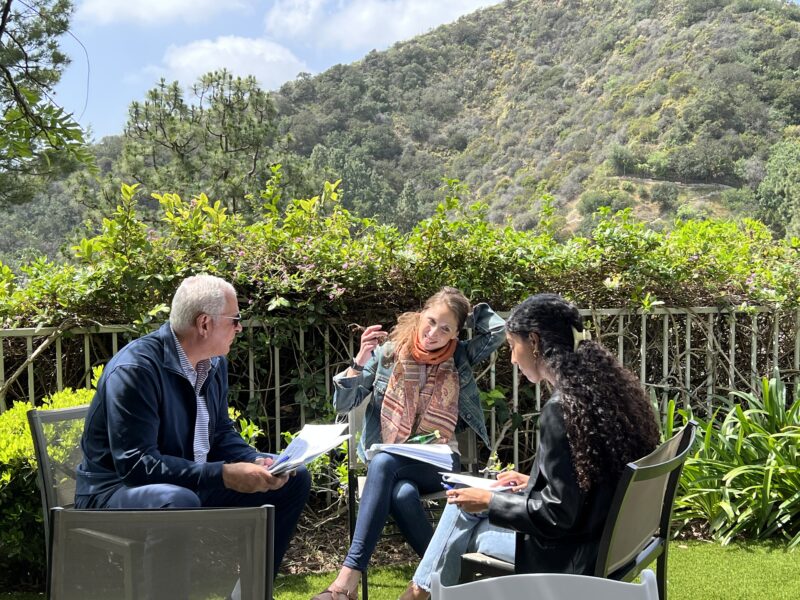 For many years, we aimed to provide a much-needed meeting ground in the highly polarized campus space that was compatible with Judaism’s educational imperative to explore divergent viewpoints. The result was that both left-leaning and right-leaning students were unhappy some of the time, but no one felt alienated all the time.

Over the past decade, however, we began to feel like more was possible, and even necessary. Shouldn’t we aspire to reach beyond mere tolerance? Could our community be strengthened by learning to appreciate difference, even if we still disagree?

With that goal in mind, we reached out to the team at Resetting the Table (RTT), an organization that seeks to foster “sacred disagreement” across political differences within and across communities. Our work together started in the student community, bringing together undergraduates with a wide range of perspectives in a “town square” style format. The goals were to strengthen our students’ relationships with each other and their ability to work together productively in the face of real differences, rather than give in to tension or avoidance.

It was a good start but didn’t even begin to address the multigenerational differences among our core stakeholders and constituents. As a rule, the perspectives of our students and board members have been shaped by markedly different formative life experiences and historical events than previous generations. While these differences could be an invitation to open dialogue and mutual learning, they also present a good chance of having participants talking past one another and taking offense.

When some students challenged Hillel’s messaging during the most recent conflict between Israel and Hamas in Gaza, we realized that the disconnect might be partially stemming from different generational perspectives and then made our second call to RTT.

This time, we asked them to facilitate a conversation among students and board members about how they respectively relate to Israel, the Israeli-Palestinian conflict and our role as American Jews.

We designed a plan to create the conditions for honest, constructive conversation across generations and viewpoints. We started with prep sessions with Pardes of North America. Through their Machloket Matters curriculum, we explored the Jewish imperative to seek understanding and truth. Students and board members prepared separately, learning from our tradition as we openly discussed some of the challenges that arise in dialogue.

With our hearts and minds a little more prepared, we then gathered outdoors for a retreat with a diverse group including both students and board members for a Speaking Across Differences Workshop led by Resetting the Table.

Auspiciously, RTT’s facilitator, Maia Ferdman, was a Hillel at UCLA alum. During her time on campus, Maia had proven to be a thoughtful leader and bridge builder. In the years since, she showed us that she had built her facilitation skills as well, training for three years with RTT through a partnership with The Jewish Federation of Greater Los Angeles.

We began with an overview of the process, potential goals for such conversations and the communal and societal costs of not engaging in them. Maia skillfully built trust among participants. And as she did so, she gently but insistently brought us deeper and deeper into a conversation that had previously proven impossible to successfully navigate.

Over the course of the afternoon, students who had struggled with their place at Hillel got to know board members who serve as the fiduciaries for the organization. They talked about their hopes and fears. They built an understanding of how they had arrived at certain conclusions. They challenged each other’s biases even as, in many cases, they still disagreed about their conclusions.

From teaching us the basics about civil dialogue to redirecting grandstanding from some of the participants, Maia guided our group through sometimes intense discussions. We paired off in small groups deliberately designed to put people who initially disagreed into conversation with one another. And despite our fears that everyone would wind up yelling at one another or leave more upset than they arrived, it was a remarkably positive experience.

Our sages teach that “all beginnings are hard.” Starting a conversation like this in your own community will bring up issues that may have caused blow-ups in the past. But our sages also teach that exploring our divides is the best path to effective decision-making, communal strength and wisdom.

Is it all Kumbaya now that we spent an afternoon talking? Not even close. As a community, however, we are now much better equipped to prevent tension and sustain open lines of communication in the coming year. Relationships have been formed. Trust has been established. And people have felt heard. All that goes a long way when it comes to dealing with the next set of issues that will inevitably arise.  And we’ll have to continue to practice. New norms only become culture when they are reinforced over time.

If we can do this with a group that spans nearly every ideological perspective, ranges from college students to retirees and includes members of every Jewish denomination, know that it’s possible for your community as well!

Julie Monkarsh Gadinsky is Hillel at UCLA’s board chair emeritus. Rabbi Aaron Lerner is the executive director of Hillel at UCLA.

To read eJP’s prior coverage of Resetting the Table, click here.