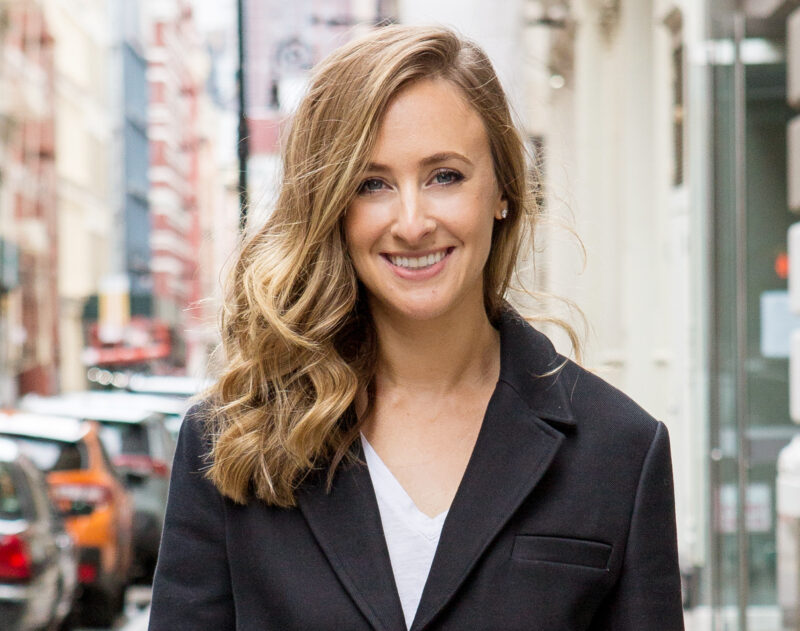 Beginning her career in education as an associate first-grade teacher in the Harlem 2 Success Academy in 2010, Danielle Freilich is now working to grow what she learned in the classroom by supporting teachers across the country. Still based in New York City, the 34-year-old recently co-launched an educational podcast while continuing to dedicate her free time to causes she cares about, including improving outcomes for students in underserved communities in Israel.

“I really believe that all children should be entitled to a quality education so that they can have the ability to fulfill their potential and pursue their dreams,” Freilich told eJewish Philanthropy. “I believe that a sound democracy relies on an educated citizenry. And without this, [children] suffer, and without this, our country suffers.”

While studying at Columbia University’s Teachers College, Freilich became curious about the model of publicly funded, privately run charter schools, which she says are “given autonomy in exchange for accountability.” After graduation, she joined one of Success Academy’s flagship schools in Harlem. She says the charter school operator’s apprenticeship model helped her hone her craft by “going slow to go fast.”

After progressing into roles where she helped to coordinate the teachers at her grade level, Freilich decided to pursue graduate studies in education policy at Harvard University to provide further context and learning for her work. When she returned to Success Academy in 2014, it was as an assistant principal for Harlem West, followed by a stint as principal of the Bronx 2 Middle School two years later. During her time as principal, all her students passed the Algebra Regents Exam and placed in the top 1% on the New York State exam.

Now working for an educational consulting firm called the Lavinia Group, Freilich feels she can make a “multiplicative impact” through sharing best practices with teachers and administrators across the country. Her support can range from enhancing instructional management and leadership development to the process of implementing a literacy curriculum.

She remains involved with Success Academy as the co-president of its young professionals committee, working to engage the next generation of philanthropists around education reform, and will soon join the network’s leadership council with her husband, Gary Freilich.

Freilich’s experience in the field has led to hours on the phone answering friends’ questions about education. After discovering her friend and fellow educational leader, Jordana Fruchter, was in a similar position, the podcast “No Silly Questions” was born.

“[We] could tell there was a need to provide parents with relatable but also research-based and trustworthy answers as they navigate the K-to-12 journey with their families,” said Freilich.

Podcast speakers are brought in based on the questions listeners submit on the podcast’s website. Since its launch two months ago, the podcast has covered a wide range of topics including the meaning of intelligence and how to understand and support teens in their online world.

Freilich was particularly inspired by one recent guest, Dr. Yamalis Diaz from the NYU Child Study Center, who shared the challenges and opportunities involved for children with ADHD. In 1997, roughly 6% of school-age children in the U.S. were diagnosed with ADHD. By 2015, over 10% were being diagnosed with the disorder, marking a steady increase that has baffled some parents and educators.

Although it is a new initiative, feedback from podcast listeners has been encouraging and instructive. “The most touching has been when a parent calls in tears or writes in to say that only now they fully understand what occupational therapy is after our episode and what a difference it’s made for their child,” says Freilich. “Or [they’ve been] inspired by our episode on independence. They’ve empowered their kids to do more chores around the home or take on increasing levels of independence and [share] how that’s been really game-changing for them as a family.”

Freilich and Fruchter are planning a Back to School campaign, where parents can weigh in on the topics covered to date and they can also raise awareness and funds for children facing food insecurity and lack of access to school supplies.

Freilich is also applying her passion for inclusive education as an ambassador for the Youth Renewal Fund, which serves as the philanthropic funding partner for Darca Schools, which provides educational opportunities for students in disadvantaged areas in Israel’s periphery.

As the granddaughter of Holocaust survivors with a passion for both Israel and education, Freilich’s introduction to the Youth Renewal Fund at a dinner party sparked immediate interest. After joining the organization in 2019, she participated in a mission trip to Israel. There she saw firsthand the impact of the organization’s work, which has its network of schools producing higher results on the country’s matriculation exam than those in wealthier areas.

“I can tell you what I saw was the real deal,” says Freilich. “These schools are committed to high standards, warm and nurturing learning communities and cutting-edge innovation.”

Loni Kraut, chief operating officer of Youth Renewal Fund, says it supports 45 schools for Israelis of all backgrounds including secular Jews, Arab Israelis, Druze and Haredi Jews. “Our goal is really to create the best education for all Israelis so that they really can help sustain the country for the future,” she told eJP. “And everyone deserves the best education they can possibly have.”

After 32 years, most of the founding members are still involved in the organization, driven to inspire people to “give back in a way that really makes them feel like they can make an impact in society in some way,” says Kraut. The Ambassador Circle was later created to instill the philanthropic spirit in young people, who range in age from their mid-20s to around 40.

Kraut explains that the current 50-70 ambassadors host events such as the upcoming fall benefit – which Freilich and her husband are involved in organizing — recruit new people, act as leaders and role models and make a significant annual financial contribution to the organization.

In her view, Freilich’s background in education and involvement in schools in the U.S., including those in underserved communities, is a particular asset to her ambassadorial role.

“To have someone that can really be the voice also from that perspective I think even makes a bigger impact as we tell our story and bring people into the organization,” she said.

After COVID-19 hit in 2020, Kraut says Freilich was “the first to step up,” with an offer to host a virtual challah-baking class to raise funds for the organization. More than 60 people attended, generating $1,300.

“She’s a teacher at heart. So, she was the best one to be teaching this group of people that [were] losing their minds in the middle of COVID. She did something great for all of us,” says Kraut. “It was a scary time for all organizations and all people in general. [This] was like a light.”

Kraut told eJP that the intentionality that Freilich and her husband demonstrate in their philanthropic efforts makes them role models for leadership.

For Freilich, committing long-term to organizations they believe in is the key to making a lasting impact, and an enactment of their core value of “giving more than we take.”