Encouraging connection and partnership is always a motif of the Collaboratory, which was held virtually last Wednesday for 250 Jewish professionals and activists. 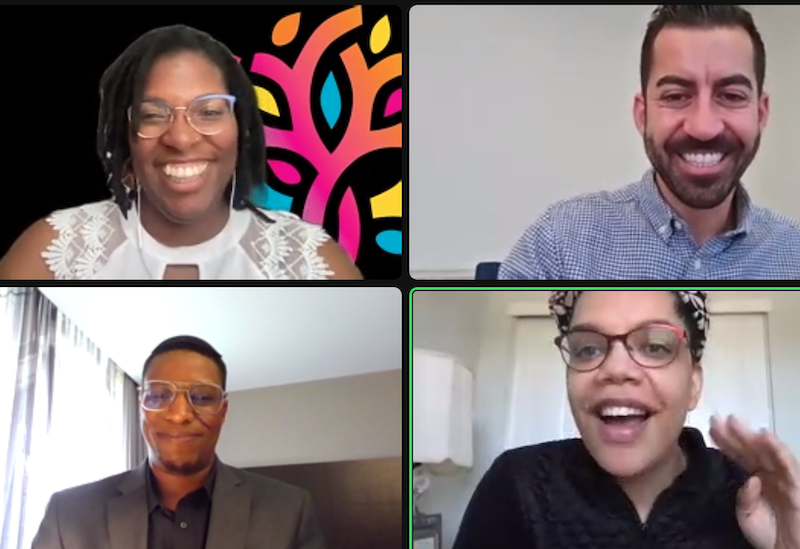 For years, Jewish social entrepreneurs have come together at the Collaboratory, a conference meant to help them forge connections and develop their ideas and organizations.

This year, the conference announced an incentive to help the participants collaborate: grants of up to $10,000 for partnerships between present or past conference attendees, or with members of other Jewish professional networks. The grant program is called Grow the Good Together and aims to advance diversity, equity and inclusion, among other goals. The program will allocate at least five grants.

Encouraging connection and partnership is always a motif of the Collaboratory, which this year was a half-day gathering held virtually last Wednesday for 250 Jewish professionals and activists. Some of the attendees later gathered in person in small groups in more than a dozen cities across the country and globe, making local connections in addition to the virtual ones.

“Networks are so powerful in forming new relationships, and building upon existing ones,” Josh Feldman, founder of The Rest of Our Lives, a group that provides sabbatical grants to nonprofit employees, told eJewishPhilanthropy.  “Furthermore, I’m struck by how, to tackle the biggest challenges of the 21st century, we will need to be increasingly networked and working not only at an organizational level but sector-wide.”

The conference was organized by UpStart, which trains Jewish social entrepreneurs, and the ROI Community, a network of Jewish leaders and professionals. Sessions covered subjects ranging from designing better fundraising models to creating healthy workplaces. The keynote address was by Toby Herzlich, founder of Biomimicry as Social Innovation, a group that explores how systems from the natural world hold lessons about the way organizations work.

The effects of the pandemic influenced both the format and content of the conference. Panels and speeches streamed on Zoom, while a vibrant comments section featured shouts of agreement, questions for the presenters and germs of new ideas. There was also a timeslot during which organizers paired off participants for a one-on-one conversation that happened voice-to-voice, without video, to give the participants a break from being on camera and the ability to multitask while socializing with someone new.

“This is a new time for Jewish community, for the world,” Ariele Mortkowitz, the founder of Svivah, a women-centered community headquartered in the greater Washington, D.C. area, said in one conference session, referencing the Biblical verse calling on God to “renew our days as of old.” “But what of ‘The Old’ is precious enough, to protect and bring with us moving forward? What’s your Torah?”

She added that “going back to what was is not possible,” and that what lies ahead is the task of “changing what was for the better,” but said that attendees should also think  about what they consider to be a “precious element” from previous eras that is “worthy of being preserved and protected.”

Participants told eJP they appreciated the gathering’s in-person and virtual components. Feldman, who served as a coach and presenter at a previous Collaboratory conference, said that the UpStart team “did a nice job weaving into a hybrid gathering that vibrancy that is often in the halls of IRL [in real life] gatherings.”

“After spending two years isolated in our boxes in Zoom rooms, it was great to have an experience that balanced access virtually to a national conversation… and have a one-on-one conversation face to face,” said Yechiel Hoffman, an L.A.-based nonprofit consultant who has attended many Collaboratory gatherings. “The experience is also about growing, to start planting seeds that turn into new opportunities and new relationships.”