Sukkot, skyscrapers, and communities have something in common: They are all fragile and perishable, but communities can last forever if we invest in them, if we care for them.

While generally not a fan of dystopian fiction, I recently fell for one such book: The Second Sleep by Robert Harris. A page-turner murder mystery, it takes place in 31st-century England, a time in which civilization has reverted to a new Middle Ages.

The narrator in the story has only a vague knowledge of our civilization but knows that it was a mighty one, full of hard-to-fathom technological wonders (although he struggles to ascertain the meaning of the “emblem of the bitten apple” that can be seen in bizarre artifacts). Interestingly, in this dystopian future, there’s virtually no trace of our gravity-defying skyscrapers. As the narrator explains, our modern style of construction, with iron and steel beams inserted in concrete casing, is deceptively fragile. The glass that covers modern buildings doesn’t decay, but it breaks and falls off. When that happens, the building is exposed to the elements, small cracks in the concrete allow moisture to penetrate, and the iron beams end up rusting, eventually bringing down the entire structure. In the novel, London is dotted with reddish-brownish stains where skyscrapers used to stand, like monuments to the futility of human hubris. 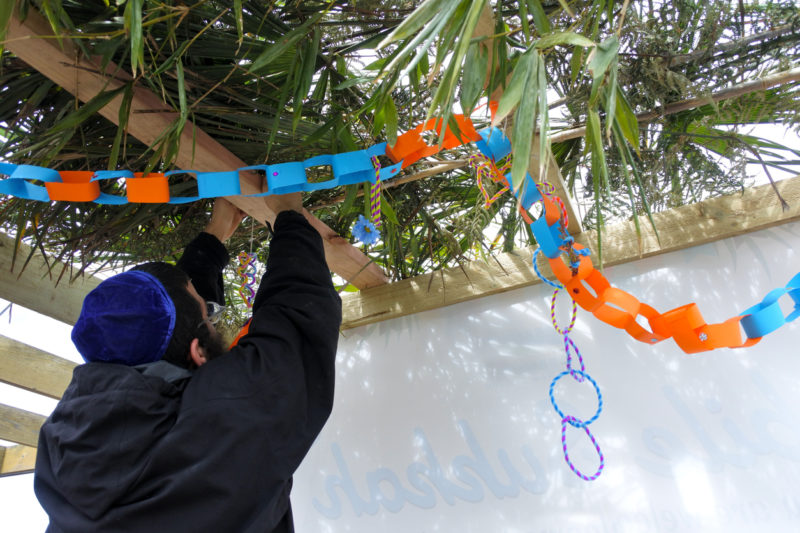 It seems appropriate to talk about rotting buildings during Sukkot, the holiday in which we’re instructed to live in temporary, fragile huts, exposed to the whims of the changing weather of autumn. Our sukkot are deliberately perishable and have no pretense of permanence. But as I read The Second Sleep, I realized that even those buildings we believe will last forever will, over time, also crumble, just like our holiday huts.

Of course some buildings, such as stone ones, are more durable, and we can see millennia-old stone ruins all over the world. But that’s only because we protect and maintain them. Stone buildings don’t collapse like concrete ones, but they are reclaimed by nature. A wondrous city of a million people, like Chichen Itza in Mexico, was swallowed by the forest until rediscovered in modern times.

Maybe Sukkot is a warning against human arrogance and a clear admonition that nothing that humans build lasts forever. But is there anything that does last? Is there a human creation that transcends the span of a few lifetimes? A hint of an answer can also be found in Sukkot.

Sukkot is, above all, a holiday of togetherness. In ancient times, it was a holiday of pilgrimage (probably the most important of them) in which Jews from all over Israel and the Diaspora congregated in Jerusalem. The most joyful part of the ceremonies was Simchat Beit Hashoeva, the ceremonial drawing of water, in which the ancient social distinctions between the priests and the rest of the people were nullified. It was a time in which everybody felt part of the same community. Another intriguing custom of Sukkot was Hakhel, a gathering of the entire People of Israel to be held every seventh year and in which the king would read the Torah to the crowds. The idea was to reaffirm our unity and equality under the law, from the king down to the lowest peasant.

Today, the custom of gathering continues: We practice the mitzvah of ushpizin, welcoming symbolic historical guests and real visitors in our sukkot, and our huts are, quite literally, big tents in which we receive every Jew. In the touching Israeli film “Ushpizin,” the main character is a poor-as-a-shul-mouse “shlimazel” with a great heart who receives ruffians in his sukkah. When his wife reproaches him for letting them in, he asks, “If we only invite people we like and enjoy, where’s the mitzvah?” That idea of coming together despite our differences is also reflected in the four species of Sukkot, which, according to midrash (Pesikta Derav Kahana), represent the four types of Jews that exist based on their level of knowledge and observance. In other words, on Sukkot we affirm that we are linked to every Jew: those alive and those from past generations. Thus, our flimsy sukkah is a symbol of understated strength: The most fragile of dwellings support the most permanent of values, that of community.

Or put differently, every building will crumble and fall, but a community can endure forever. Jews, noted Rabbi Lord Jonathan Sacks, don’t build big monuments; we build communities. And Sukkot is a reminder of how ephemeral brick and mortar is and, in contrast, how transcendent community can be.

We live in a time in which skyscrapers are easy to build. From my office in Manhattan, I saw the magnificent complex of Hudson Yards spring up from the ground in just a couple of years. Communities, in contrast, can’t be built overnight. The fact that they can last forever doesn’t mean that they are unbreakable. Yet, they can outlive even the tallest and strongest building, provided we take care of them.

The notion of community, as Judaism understands it, is under fire today. The ideas of mutuality, reciprocity and radical hospitality are countercultural today. We live in a society in which the other is to be avoided, not sought, in which electronic devices shelter us from the challenge to build meaningful relationships with real people. In a time of intolerance and echo chambers, we struggle to define what we have in common with our fellow Jews and with our fellow human beings. The forums, like the Hakhel, in which we needed to coexist with different Jews are disappearing, and the skill of building and maintaining a community is slowly eroding, to the point of disappearing. We are creating a world of individuals unmoored in any collective experience. And no, a social media mob is not a community; rather it’s a symptom of the lack thereof, a pathetic response to our existential loneliness.

Sukkot, skyscrapers, and communities have something in common: They are all fragile and perishable, but communities can last forever if we invest in them, if we care for them. This Sukkot, let us commit to rebuilding our communities, ravaged by the evil winds of polarization and intolerance; let us rediscover the joy of togetherness and the transcendental power of mutuality. Let us realize that we are all part of the same fabric: a magnificent tapestry of similitude and difference.