More than a dozen athletes at the 21st Maccabiah Games are older than 80, and many are playing alongside their families. 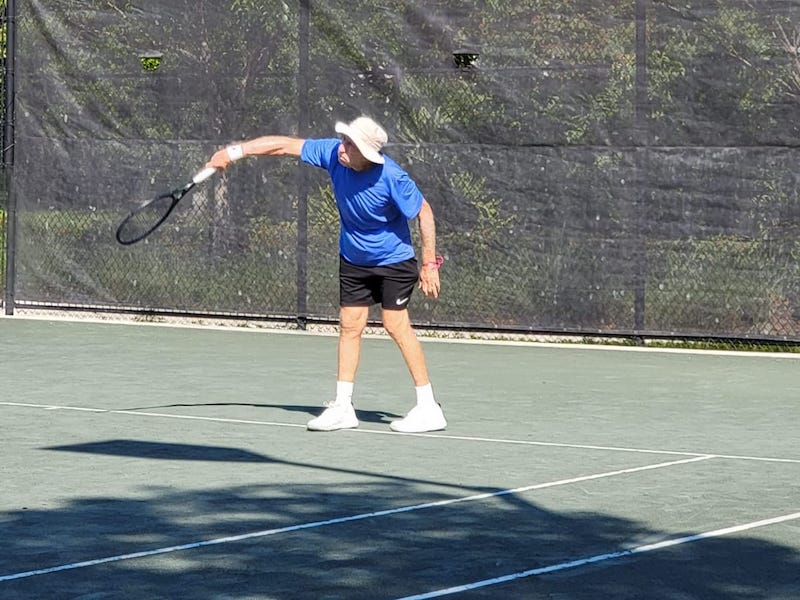 Joseph Schwartz, 81, on the court in preparation for the Maccabiah.

When Joseph Schwartz’s son Jason came to him and said he wanted to try out for the 21st Maccabiah Games for his 50th birthday, Schwartz, 81, a lifelong tennis player who competed in college, thought it was a great idea.

The retired court stenographer decided to try out at a qualifying event in his home state of Florida and ended up qualifying for the Maccabiah Games in Israel in the “Super Extra Grand Master” division for athletes who are older than 80. Both of his sons, Jason and Todd, also ended up making the team in their respective divisions.

The 21st Maccabiah began on July 14 and runs through July 26. Also known as the “Jewish Olympics,” the competition takes place every four years and features 10,000 participants from 60 countries competing in 42 different sports, including basketball, judo, badminton, ice hockey, surfing and climbing. Both swimming and tennis have competitions for athletes who are older than 80, with around a dozen total athletes in the “Super Extra Grand Master” division.

“I’ve been playing tennis all my life,” said Schwartz, who attended the University of Miami on a tennis scholarship and traveled the world playing collegiate competitions. “Tennis has always been our outlet for our family. When our children were growing up, they didn’t have cell phones and internet. They’d get together with their friends and do things like play tennis.”

“Very few families here can say they have a father and two sons playing in the same sport,” said Schwartz, whose family delegation to Israel included more than 15 people, a dozen of them spectators cheering on Schwartz and his sons. “Look at how the world opened up to our family, to be in Israel for the Maccabiah Games… your heart is too full to express what is happening.”

The competition for seniors will be held on clay courts in the Tel Aviv suburb of Ramat HaSharon, at the headquarters of the Israel Tennis & Education Centers. Clay courts are much more forgiving on creaky knees than the traditional asphalt courts.

Like Schwartz, many of the “Super Extra Grand Master” athletes are part of families with multiple generations of competitors, though not always in the same sport. One of the athletes Schwartz may meet on the clay courts is Leonardo Rozenblum, 81, a lifelong tennis player and Maccabiah athlete from Uruguay, whose son is also competing in the half-marathon. Rozenblum’s longtime doubles partner, 82-year-old fellow Uruguayan Eugenio Garfinkle, is part of a three-generation Maccabiah family — with a son and grandson competing this year in football.

Rozenblum served as the chief director of sports more than three decades ago, at the 1991 PanAmerican Maccabi Games in Montevideo, Uruguay. The PanAmerican Maccabi Games take place every four years, one year before the Maccabiah, and feature Jewish athletes from North and South America. This year, Rozenblum served as the flagbearer, alongside Garfinkle, for Uruguay at last night’s opening ceremony at Teddy Stadium in Jerusalem.

Rozenblum said he has loved seeing the way the Maccabiah organization has grown since he first competed in tennis in the 12th Maccabiah competition, in 1985.

“They’re always getting better, with more sports, and more modern sports,” said Rozenblum. “I do this not just for the sport, but also because it’s social, and for the community,” he said. In 2003, after an economic crisis plagued Uruguay, Rozenblum was one of the founders of the Tzedaka Foundation of Uruguay to assist members of the Jewish community and others who were struggling to make ends meet.

He drew on his decades of experience with the Maccabiah for his charitable work. “This is all about coexistence,” he said. “It’s important to stand next to the youth, and the Jewish athletes in South America and the whole world,” he said. He is thrilled that Uruguay has a 180-person delegation this year, the country’s largest ever. Its ranks were buoyed by many Argentinian Jews who have moved to Uruguay in the past years due to Argentina’s economic crisis.

Watching his own country’s delegation grow, in addition to the entire Maccabiah organization, is one of the things that kept Rozenblum motivated to go to the gym even when he wanted to stay on the couch.

“The principal thing is to keep active,” Rozenblum explained regarding the lifestyle that keeps him in shape beyond age 80. “I play tennis four times a week, I go to the gym every day and I train for a full hour. Afterwards, I am careful with my food, with rest, I eat really healthy, so I’m still strong at 81,” he said.

In Florida, Joseph Schwartz maintains a similar schedule to stay limber and strong. He plays tennis three to four times a week, but said the secret to staying competitive on the court past 80 is getting serious about stretching.

“You have to constantly stretch, and you have to be active,” he said. “Tennis gives you a purpose or reason, if you want to continue to play and do something you love, you need to make sacrifices, things that keep you strong.”

The Israel Tennis & Education Centers will be managing three of the four tennis locations for the Maccabiah, in Jerusalem, Haifa and Ramat HaSharon, where the clay courts are located. Ahead of the Maccabiah, the organization has been offering free tennis clinics to drum up excitement about the competition.

The organization, which was founded in 1976, teaches tennis to 20,000 participants each year at 17 centers around the country, many located in underserved cities or neighborhoods.

“The power of tennis is that it’s a great vehicle to connect people,” said Yoni Yair, the vice president of development for ITEC and a graduate of the program in the 1970s. The organization runs a number of programs focused on social change, including one that teaches tennis to Jewish and Arab children together.

“Many people come [to the Maccabiah] for the social opportunity to meet people with the same passion of both Israel and sports,” Yair said. “It’s incredible to see how people come and immediately bond and have conversations. Tennis is a great way to be social and form relationships.”

Yair said he isn’t surprised that several older athletes are taking to the court. The competition also has divisions for tennis players in their 50s, 60s and 70s.

“Tennis, and sports in general, is a recipe for a healthier life,” said Yair. “Tennis is a game that you can play till you are 90-plus. It’s just fascinating to see people this age [group] come and compete in the summer in July in Israel, which is extremely hot, and they’re getting off the courts with a big smile.”