Doing good in the world

Even through lean times, I always managed to find a way to keep giving. It is one of the most important and personally satisfying things I accomplish each year.

Have you ever asked yourself whether a small donation can really make a difference to a charity that is trying to heal the world or even just a tiny piece of it? Whether the cause that interests you is regional, national or global, the answer to that question is a resounding, “Yes!”

I used to feel embarrassed to send only modest donations, but I still sent them. Later on, after I’d read an article in a magazine dedicated to philanthropy, my attitude shifted completely. I had learned that although few of us can make a million dollar contribution, many millions of people can and do donate $5, $10, or $25 to help dedicated groups to move their valuable work forward. Over time, these smaller amounts will add up to many millions of dollars of support. Any fundraising professional will tell you this is true. 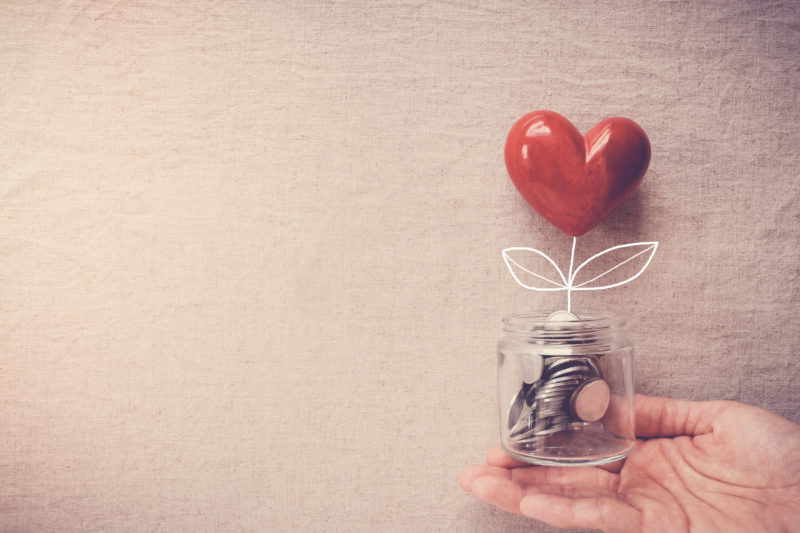 Raised in the Jewish faith that considers charitable giving one of the most important aspects of daily life, I learned to help others while still a young child. Each week I dropped coins from my allowance into the metal tzedaka box in our living room. Tzedaka comes from the Hebrew word for “justice” or “righteous behavior” and it has also come to represent “charity” as well. Each time our box became full, my parents would empty it and turn those precious coins into a check for a favorite cause.

When I began to earn “real money” as a teenager, I started to support more charities I admired. My parents weren’t wealthy people, but they were wealthy in kindness. They taught me that there was always someone with a greater need than my own. “There but for the grace of God…” was a phrase I often heard growing up. Those compassionate words still inspire my giving choices.

Many decades ago, setting a personal goal, I decided to add a new charity to my list of those I supported every year going forward. I have continued to do so and a spreadsheet keeps track of my donations — one charity for each year of my life. When circumstances allowed, I increased the value of my gifts, but I have never once stopped supporting a cause after I donated to it the first time. After all, repeat supporters are something every charity hopes to attract and be able to count on.

Recently, I received a handwritten thank you note from the president of a group that encourages people to be organ donors. He wrote that he appreciated my annual contribution made in memory of a dear friend who died nineteen years after a vital kidney transplant extended his life. Those extra years permitted him to marry and create a loving family who survive him. It’s very easy for me to remember to make that donation because I write the check on my late friend’s birthday. It helps me to remember how wonderful our friendship was and always will be for me.

Despite frequent reminders, I prefer to make annual donations to each group I support and my spreadsheet includes the name and contact information of each organization, amount of my donation, and the name of the person I have honored or memorialized. This record also comes in handy at tax time when I compare it to the charitable receipts I have in my file.

Reviewing my record, I realized the dozens of organizations I’ve chosen to support covers a wide variety of missions. These include animal rescue, archival preservation, summer camps for sick kids, cultural arts programs, medical research, veterans’ services and numerous faith-based causes including many outside my own tradition. To be honest, I’m proud that I have helped to address so many important objectives over such a long time.

How do I pick new causes to help? Often, I’m touched by a story that I read or hear about on radio or television. Friends have introduced me to issues they think might interest me. When someone close to me loses a family member, I honor that person’s memory by donating to a charity that is dear to the family. Such a gesture can also be a nice way to send Happy Birthday wishes to someone who doesn’t need any more “stuff” or acknowledge a key milestone or notable career achievement.

As anyone who has ever made a single donation knows, I can count on steady solicitations from groups I have not previously supported. If their mission moves me, I put that information into my “CONSIDER” file for the future. But before I add any new organization, I always check Charity Navigator, GuideStar, or Give.org to make sure they are a legitimate nonprofit that will use my funds in an ethical and honest manner.

Donations can be made with a check, a credit/debit card, or a smartphone app. Whichever method you use; I hope you will remember the significance even a modest contribution can make when you join the caring company of millions of others. Even through lean times, I always managed to find a way to keep giving. It is one of the most important and personally satisfying things I accomplish each year.

I have discovered that doing good in the world, even in small ways, can stretch your heart and budget in countless directions. I encourage you to try it.

Jane R. Snyder is a freelance writer/songwriter whose feature articles, short stories and poems have appeared in print and online. Her songs have been recorded and licensed for use on TV and in film. Please visit: janersnyder.com or thisjane.com