Reboot Startup Nation and itworks join forces, with support from American federations, to connect new arrivals with jobs in tech 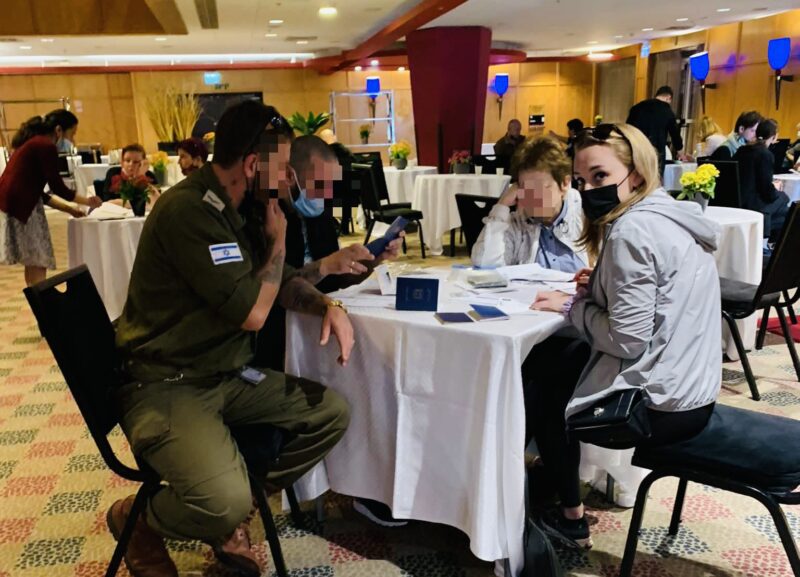 Sophia Tupolev-Luz (black mask) meets with other leaders helping new arrivals at a hotel for olim on April 14, 2022, at the Dan Hotel Tel Aviv.

Artem Minaev had a lot of fears about moving to Israel with his wife and two children from Belarus, after they decided to quickly leave their home following Russia’s invasion of Ukraine. He worried about fitting in, finding a place to live, learning the language. But one thing was taken care of, even before their arduous 28-hour journey from Minsk to Tel Aviv: Minaev’s job.

Just a week after landing in Israel, Minaev signed a contract with Cloudnow as a cloud architect, a position he had interviewed for and accepted before they left Belarus. “It was really great to get this offer and be confident about coming,” he said.

Minaev was the first person displaced by the war in Ukraine to land a job through The Reboot Startup Nation, a volunteer-run database connecting Russian-speaking new immigrants and Israeli high-tech companies.

“We really believe that the high-tech sector has the ability to absorb so many people from so many different backgrounds, not just programmers,” said Sophia Tupolev-Luz, one of the volunteer co-founders of Reboot. Last week, Reboot announced a partnership with itworks, a 16-year-old Israeli organization that helps place people from marginalized communities in the tech sector. Itworks has placed more than 5,000 single mothers, people from the Arab sector, and people with disabilities with tech companies over the years.

When Russia invaded eastern Ukraine on Feb. 24, Tupolev-Luz, who lived in Moscow in her 20s before moving to Israel, was suddenly inundated with messages from friends. People she knew both in Ukraine and Russia messaged to let her know they were moving to Israel immediately and asked for help finding employment.

Tupolev-Luz, who now works as a strategic communications consultant for a number of high-tech companies, reached out to her professional network. “I spoke to my clients and asked them, ‘Would you be willing to meet with people who came here?’” she said. “I thought we’d get a few people and a few jobs, but it turned out it was a much bigger thing than we thought.”

Currently, Reboot has helped connect more than 700 people with jobs at Israeli companies, and the need is only growing. More than 10,000 people have submitted their resumes, joined Reboot’s social media channels or signed up for workshops on resumes, interviews or other skill sets. More than 300 companies have signed up to recruit candidates from the database. Over 100 Israelis currently working in high-tech have offered to get coffee with new arrivals or act as mentors.

In the past six months, 37,000 new arrivals from Ukraine, Russia and Belarus have poured into Israel, according to the Ministry of Aliyah and Integration. Nearly 18,000 are new citizens, and 19,000 have open claims to become citizens under Israel’s Law of Return, which allows for anyone with a Jewish grandparent to move to Israel, but their paperwork must be approved before they can gain citizenship. There are also around 5,000 Ukrainian refugees in Israel who do not have citizenship rights and are in the country on tourist visas.

Minaev, the new hire from Belarus, noted that one of the benefits of high-tech is that many of the international companies work in English, and they are looking to fill specific positions that many new arrivals are qualified to fill. Once Minaev came across Reboot’s resources while in Minsk, he got to work quickly, switching his LinkedIn profile location to Israel and updating his resume. He immediately started talking to a number of companies who were interested in his skill set.

Reboot’s support was crucial, Minaev said, because he and others have no idea how to approach a foreign job market while living abroad, especially while embroiled in so much uncertainty about their documentation and futures.

“I have a family and two kids, and I don’t want to be dependent for anything that I can’t manage myself, like money or an apartment,” said Minaev, who is originally Russian and moved to Belarus in 2015. “I know Israel is more expensive than Belarus so it was very important to find some opportunity and jobs before I arrive to Israel.”

Minaev noted that it’s much easier for people in tech to easily find placement in a new country, compared to other professionals that require local certifications. “High-tech is not as complicated as it is for doctors or scientists, because high-tech is more flexible between countries,” he said.

Ever present in Reboot’s work is learning from the mistakes of the wave of Jewish immigration from the Former Soviet Union in the 1990s, when Israel absorbed more than a million Russian-speaking immigrants.

Many of the new immigrants were highly skilled doctors, engineers and professors. But many professionals were forced into menial labor jobs far below their skill set, due in large part to Israeli racism. “One of the main reasons we exist is to avoid a repeat of the ’90s aliyah,” said Tupolev-Luz. “We’ve asked the Ministry of Aliyah, ‘What went wrong? How did this happen?’ They told us people were rushing into jobs without learning Hebrew… there was such a rush to get a job, get a job, get any job,” she said.

This emphasis on finding any paying job immediately often put Russian olim on low-wage trajectories where they were never able to gain local certifications and return to their professions.

Reboot and itworks are encouraging people to enroll in ulpan Hebrew classes, as well as helping them workshop their resumes, gain new skills and understand the nuances of an Israeli job interview, in hopes that their first job in the country will set them on a better career path.

Israeli society also has work to do.

“It starts without how Israeli society perceives these olim [new immigrants],” said Tupolev-Luz. “The term ‘refugees’ is very stigmatizing for them. We’ve tried to fight that and use the term ‘displaced professionals.’”

While compassion for people forced to flee because of the Ukraine war is quite high among most Israelis, Tupolev-Luz said it’s important that new immigrants know they’re getting the jobs because of their qualifications, not because of pity.

“In many cases we’ve had reports from companies saying, ‘We’ve been looking for a [development-operations] person for six months and we found exactly what we needed from someone in your database,’” she said.

‘Why isn’t this just for Ukrainians?’

“People have not fully understood why Russians need to be a part of this work; they ask, ‘Why isn’t this just Ukrainians?’” Tupolev-Luz said. “Russians are facing extreme political oppression. Russians and Belarussians can go to jail for saying ‘no war’ on social media, they can’t go to protests. Russia is no longer a free country, though I don’t know if it ever was.”

She pointed to Russia’s threatened closure of The Jewish Agency as evidence that Jews are in danger on all sides of the conflict. “Unfortunately, war has caught everyone in its dragnet,” she said.

“I do sometimes have to explain this to people who know less about the geopolitics… The Russians and Belarussians that are coming are so horrified by what’s happening. You’re not seeing the Russians who are pro-war, because they have no reason to leave. The ones that think the war is a problem say, ‘I can’t raise my child in this country.’ People are really afraid, and it’s really difficult to hear the stories about how they’re unable to continue their life.”

Another major problem is the approximately 19,000 Russian-speaking arrivals who are in bureaucratic limbo, considered eligible for aliyah, but whose paperwork has not been approved for immigration. This process can often take years for Jews from the Former Soviet Union, leaving candidates without the ability to work while they are waiting.

Currently, Reboot is working with HIAS to try to assist those waiting for immigration approval as well as refugees who fled Ukraine but do not have the ability to gain citizenship. These groups do not have work permits, though the Interior Ministry has said they can work, making job placement tricky.

Meanwhile, in the southern Israeli city of Kiryat Gat, Minaev is settling into his new life, working most days remotely and sometimes commuting to his office in Kfar Saba. He likes his work and is grateful that he’s able to support his family, and is working on learning Hebrew so he can better communicate with his company’s clients. His oldest daughter, 9, attended school for two months, and spent most of the summer vacation playing in the park with other Russian-speaking children. His son, 2, has enjoyed going for bike rides and exploring the parks around their new home.

“We’re trying new fruits, like mango and watermelon. It’s amazing for us and the kids like the fruits, and of course all the ice cream,” said Minaev.

But their favorite part of their new life might not come as a surprise to veteran Israelis. Minaev’s oldest daughter has celiac disease and can’t eat wheat products, so they’ve fallen in love with an Israeli classic – the gluten-free peanut butter puffs. “They really like bamba… that bamba is really great.”