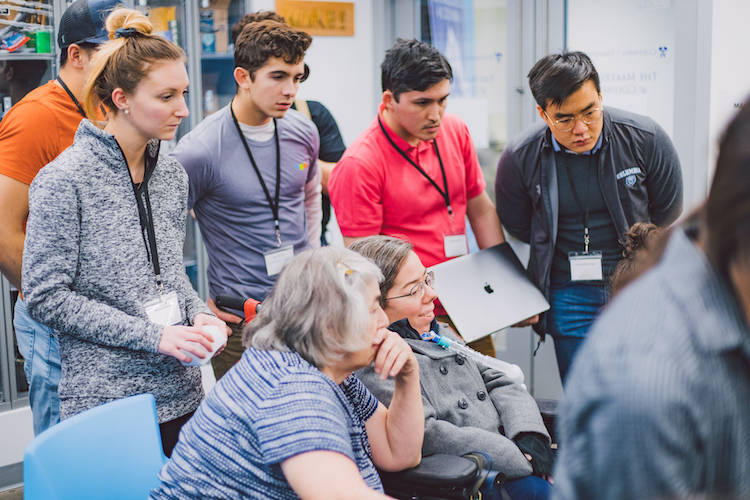 A prosthetic arm adapted for cycling, a zipper aid for people with limited upper-arm mobility and a playground swing set for children with cerebral palsy are among the submissions in the Tikkun Olam Makers’ inaugural global contest, which will culminate in a celebration of the winners at Expo 2020 Dubai in November.

The Expo marks the group’s first international event, held both to invent such useful items, and to help the organization move into a new phase in which it is turning a greater number of its prototypes into actual products, Gidi Grinstein, TOM’s founder and president, told eJewishPhilanthropy.

TOM is a web platform that offers open-source manufacturing instructions for devices that help solve difficulties faced by people who live with challenges related mainly to disability, but also to age and income. The name evokes the Jewish value of tikkun olam, or repairing the world.

The concept aims to help people living with challenges and their supporters to harness the untapped potential of student and professional engineers, inventors, programmers and designers eager to help other people by using their skills.

“It’s estimated that every year, students are doing 50,000 projects,” Grinstein said. “So the school infrastructure is there.”

TOM was launched in Israel in 2014 by the Reut Group, a think tank and an incubator of solutions to social challenges also founded and headed by Grinstein, in partnership with the ROI Community, an entrepreneurial network of young Jewish leaders convened by the Charles and Lynn Schusterman Family Philanthropies. Grinstein, 51, was involved in Israeli-Palestinian peace negotiations in the late 1990s, and helped create Birthright Israel, whose success he said helped inspire TOM.

TOM also helps grow and coordinate a network of about 70 “maker communities” that consist of people living with these challenges and those trying to help them, who gather regularly online and increasingly in person to brainstorm and build.

“That worldwide web of TOM communities is our movement,” Grinstein said.

Teddy Lambert, a fourth-year student at Georgia Institute of Technology in Atlanta who is studying computer engineering, is on the executive board of a TOM community on his campus.

“TOM got me super-interested in the way it was bridging the gap between technology and human-centered design,” he said.

About half the students on the board are, like Lambert, Jewish, and were preparing to do a “makeathon” — a gathering in which people work together to brainstorm and build something new —  when the coronavirus pandemic hit and their campus shut down.

They gathered online instead, producing two rough prototypes — a spooling system to help an elderly woman avoid tripping on the cord of her oxygen machine, and customized harnesses for children with disabilities who wanted to use the zip line at their camp.

“TOM is a good opportunity to teach about the Jewish value of tikkun olam,” Lambert said.

The website offers 37 products that are in final form, such as “Wave-ability,” a surfboard developed for a wounded veteran of the Israeli Defense Forces, and 463 prototypes, including a “Winter Wheelchair” that enables a child’s wheelchair to glide over the snow.

The prototypes are available as free downloads to people who want to improve the product, or to try using it themselves. Most of the inventions available on TOM can be produced using a 3D printer.

“By the prototype stage, the bulk of the work has been done, and we just need to make it through that last mile,” Grinstein said. “But that last mile is the most difficult. That stage is for professionals.”

The organization estimates that users of the website have downloaded about 2,700 product files of TOM products, and roughly the same number of prototypes.

During the coronavirus pandemic, the organization encouraged its maker groups to focus on developing personal protective equipment (PPE) for people with disabilities, such as transparent face masks for individuals interacting with those who read lips. A group in Mexico City helped create a device that amplified the capacity of ventilators, Grinstein said.

“Wave-ability” has been downloaded 76 times, and in Israel, 11 surfboards are in use.

“A development challenge for us is to know how each product file was used,” Grinstein said. “On the plus side, every download can support the manufacturing of multiple products. On the negative side, sometimes the download doesn’t lead to manufacturing or delivery.”

TOM has a budget of $1.5 million, which Grinstein wants to raise to $2.5 million in the near term. Philanthropic supporters include the Jim Joseph Foundation and UJA-Federation of New York.

Sometimes, even a successful product will only be produced a few times, or just once.

“TOM is aiming to deal with niche markets that are neglected, not with mass markets,” Grinstein said.

The misconception that TOM should specialize remains one of Grinstein’s primary challenges, he said.

“I meet people who tell me I should find one product, one solution, and focus on that,” he said. “But I say, ‘My product is a system that can carry 1,500 solutions.’”