The Tenement Museum looks to do more fundraising 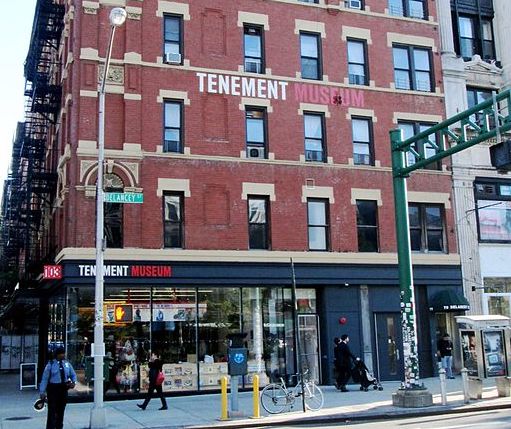 New York City’s Tenement Museum, which barely survived the economic death knell dealt by the pandemic, is about to reopen. But its new leader says the museum’s business model will never be the same.

Founded in 1988 by two Jewish women, a historian and an activist, the museum encompasses two restored Lower East Side apartment buildings in an iconic neighborhood that came to define the Jewish immigrant experience in the late 19th and early 20th centuries. It uses tours through the neighborhood and the historically accurate living spaces of several families to tell the story of New York City and the waves of  immigrant groups, including Jewish, German, Irish, Italian, and, more recently Chinese and Puerto Rican, that have transformed the Lower East Side.

Before the pandemic hit, the museum boasted more than 200,000 annual visitors and revenue of about $12 million. But almost 80% of that revenue was contingent on in-person access to the museum — proceeds from ticket sales and the operation of its gift shop — leaving it so vulnerable to coronavirus that a report, “Art in the Time of Coronavirus,” published by the Center for an Urban Future last April, described it as one of the city’s most devastated institutions.

Now, as it prepares to reopen its doors to tour groups in May, the museum is planning to diversify its sources of revenue to prevent a similar near-catastrophe in the future, Annie Polland, the president of the museum, who took the helm in January, told eJewish Philanthropy. “I don’t know that we want to get back to 80% earned income and 20% philanthropy,” she said. “That’s great, it means there’s a public for what we do. But that model didn’t work when there was a big pandemic. We need something better.”

Even before last spring, the Tenement Museum’s board and staff were trying to increase revenue from fundraising, but the pandemic accelerated their efforts, said Scott Metzner, co-chair of the museum’s board of trustees and president of the Janus Property Company: “If we had a gigantic snowstorm, we lost a week of revenue,” he said, adding that the board is looking to foundations, corporations and small donors as sources of support.

Individuals played a big role in saving the museum last spring, Polland said. About 4,000 people from almost every state in the country donated to the museum after an April New York Times article publicized its plight. The museum’s virtual gala, scheduled for April 29, is an effort to thank those individuals, who collectively donated almost $5 million. As of last Friday afternoon, 1,200 households had signed up, Polland said. “Aggregating a lot of small-dollar gifts adds up to significant money,” Metzner said. “At first that happened almost by chance, but now we’re looking at it in the same way political fundraisers do, and the way Amazon sells things like toaster ovens.”

Polland had already worked at the museum for nine years as the head of programs and education, but left to become the executive director of the American Jewish Historical Society in 2018. She didn’t apply for the job at the museum, but as soon as she was approached, she couldn’t stop thinking about it, she said.

Polland has an idea for another source of revenue — an educator-training institute that would share the museum’s method of using a place to teach history and generate conversations that connect the past and present day. “We are always getting people who are telling us that they want to better understand how we do what we do,” she said. “People come from Finland. They come from Iowa. That happens several times a month.”

The museum does not expect to get back to its pre-pandemic visitor numbers until as late as 2025 due to COVID regulations like vaccine requirements and capacity restrictions, Polland said, but in the meantime, it will earn revenue from a series of virtual tours initiated under Vogel and expanded under her leadership. In March alone, virtual tours for school children generated $50,000.

The gala will also celebrate the opening of a new exhibit on the fifth floor of 97 Orchard St., the first of the museum’s two buildings, that will be the first to showcase a family that did not actually live in the building. The museum had wanted to include the story of Black Americans — such as Joseph Moore, a Black waiter who had lived nearby in 1869 — and had envisioned a more “traditional” exhibit space, with text on the walls and artifacts in cases. Moore was already part of the story of the museum, because the father of an Irish family who did live in 97 Orchard St. and was the subject of one of the exhibits shared his name and occupation. The two men were listed together on a city directory that was part of the tour. Ultimately, the Tenement Museum decided to simply recreate Joseph Moore’s apartment — which had been about a half-mile away — in 97 Orchard.

Metzner said the museum believes its mission of sharing the stories of several groups — not just pre-war, European immigrants — will appeal to the same corporations who have made recently philanthropic contributions to such causes as LGBTQ rights, Black Lives Matter or, most recently, opposition to a new restrictive voting law in Georgia. “Institutions like ours, that are based in fact and research, that have a seriousness of purpose, appeal to corporate values,” he said.

At the same time, both Polland and Metzner said, they will take the museum’s message to Jewish foundations and individuals as well, although it hasn’t as yet attracted significant support from any major donors who prioritize Jewish life or causes. The Zegar Family Foundation made a matching grant to encourage donations last year, and Meryl Snow Zegar is also a board co-chair.

The FJC: a Foundation of Philanthropic Funds, also approached the museum after the pandemic started and offered to buy its outstanding loan and adjust the terms, including lowering the interest rate. It was clear why the FJC was reaching out to a fellow Jewish institution, Metzner said: “The Lower East Side holds a special place in the collective Jewish imagination.”