The Hebrew language is a critical component of Jewish identity formation, and has the potential to unlock several areas of Jewish life that otherwise aren't accessible without Hebrew skills, such as text study using the original source and Israel engagement.

Every Erev Shabbat at camp is a special time: Staff and campers don more formal clothing, often in white, they sing “Shalom Aleichem,” enjoy aruchat Shabbat (a Shabbat meal) together, and go to the Beit Knesset (synagogue) for tefillah (prayer). But the majority of the community relies on translation to understand tefillot (prayers) and other Hebrew terms and phrases. In fact, few Jewish summer camps incorporate Hebrew more than symbolically, in the form of what has been called ‘Camp Hebraized English’ (CHE).

Camp Hebraized English refers to a collection of Jewish-American “life words” that include traditional Jewish phrases like “shabbat shalom,” as well as Hebrew words more specific to the camp setting such as “chadar ochel” (dining hall). The term was coined by professors Sarah Bunin Benor, Jonathan Krasner and Sharon Avni, who argue that CHE is not Hebrew, but a vehicle to familiarize campers with certain terms and phrases through “Hebrew infusion.” I have seen the usage of CHE in my own camp experience, spending three summers working for a URJ camp in Texas. There, many spaces had CHE names, such as the kikar, a gazebo in the middle of camp, but Hebrew use was otherwise only used by Israeli staff or during Jewish life rituals. While many camps used to put more of an emphasis on Hebrew usage, most have moved towards the “Hebrew infusion” approach. 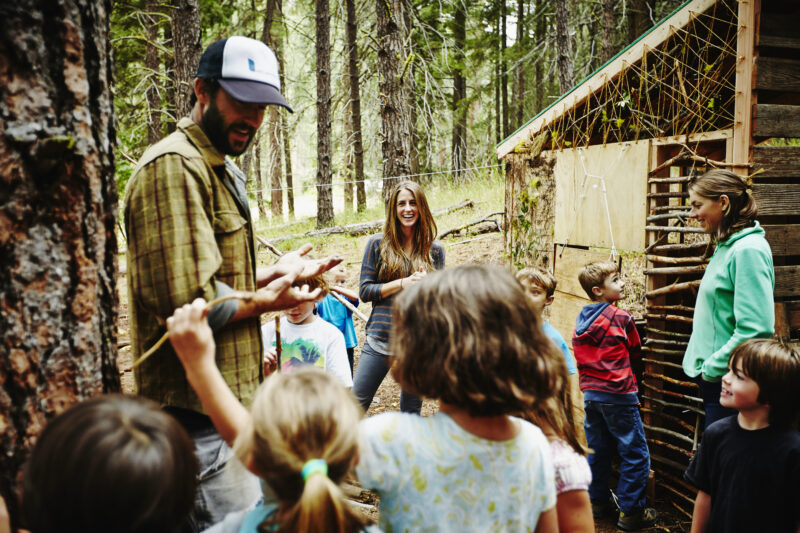 In camps today, the Hebrew language takes on a symbolic role (used mostly in prayer, signage, activities and as names of spaces), and while this may infuse a Jewish flavor into camp, it does not instill campers with any form of Hebrew language proficiency.

A recent AJC survey found that, of respondents, “42% cannot read or speak Hebrew, and 36% can read phonetically with minimal understanding.” An overwhelming majority (78%) of American Jews have little to no Hebrew skills. Even as youth are taught the alef-bet in their Hebrew schools, and learn their Torah portions for their b’nei mitzvah, they end up not being able to string together even a simple Hebrew sentence.

The Hebrew language is a critical component of Jewish identity formation, and has the potential to unlock several areas of Jewish life that otherwise aren’t accessible without Hebrew skills, such as text study using the original source and Israel engagement. When I ask my peers about their Hebrew education, many state they don’t remember what they learned, and that they “hated it.” I view this as a result of supplementary education focusing purely on the religious aspects of Hebrew, while ignoring the modern Hebrew language and teaching methods that have worked in Israel.

True, teaching a language is easier said than done. Time constraints, in particular, present a real obstacle to Hebrew learning in supplementary education, and many American-Jewish families do not speak Hebrew at home, nor do they interact with Hebrew speakers daily. When relying on translation for Hebrew text, we lose some of the allegorical flavor central to the Hebrew language, and this illiteracy has created a barrier for ritual engagement and Jewish community-building.

Through b’nei mitzvah preparation and CHE, camp does provide a modicum of Hebrew education. But as an informal educational environment, summer camp has great potential for providing more significant language training. With Israeli delegations attending camps every year, a unique opportunity presents itself: to send teachers of modern Hebrew to run programs using a curriculum similar to the Israeli ulpanim (intensive Hebrew language courses). Modern Hebrew education can also be offered for campers preparing for their b’nei mitzvah. Introducing modern Hebrew grammar and language alongside biblical Hebrew will help reinforce both languages and increase the pace of acquisition.

These initiatives would also help build stronger ties between American Jews and Israelis, as campers interact with their Israeli friends and counselors on a more personal level, in their own language. And they would enable camp communities to delve deeper into religious texts.

As the divide between Israeli and American Jews gets wider, we must rethink the role Hebrew plays at Jewish summer camps in order to help bridge the gaps between our communities, while also re-engaging our youth by enabling them to read and understand our texts in their source language. Strengthening modern Hebrew programming in camps will help campers build stronger ties to their Jewish identity and to Israel in a more nuanced and tangible manner. It is in the best interest of American Jewry that the leaders of Jewish camps in North America create and employ such programs in summer camps to equip our youth with Hebrew skills as tools to engage in their Judaism and the Jewish community at large.