The new rabbi in Charleston, S.C. is stuck in Gibraltar 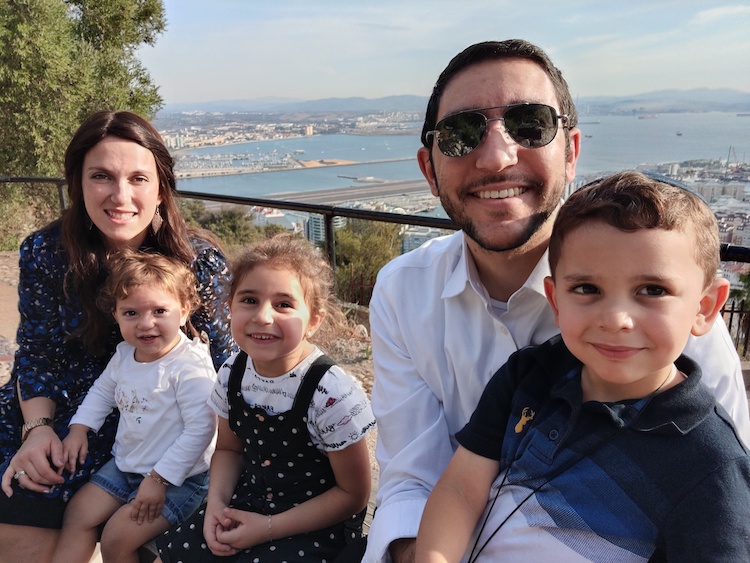 Just like any newly hired rabbi, Sholom Mimran of the Orthodox Congregation Dor Tikvah in Charleston, S.C., is spending his first few weeks meeting with congregants and colleagues and speaking from the pulpit.

Only Mimran is doing this from Gibraltar.

The tiny British territory at the southern tip of Spain has been home to a small Jewish community since the mid-1700s. Mimran has been studying and serving as a rabbi there for the past seven years, before being hired by the South Carolina synagogue right before Rosh Hashanah. Having visited Charleston as a candidate for the job, he knows the seemingly disparate communities have a lot in common, he told eJewishPhilanthropy.

“They’re both open and welcoming places where all the Jews work together,” Mimran said.

America, however, is not quite as open — especially in the second year of a global pandemic.

“Americans don’t know how hard it is to get into America,” he said.

Dor Tikvah was planning to bring Mimran into the country on a religious visa, but they learned that would necessitate an official site visit, and could take almost two years.

Now the plan is for the Orthodox Union to sponsor the rabbi, with his arrival expected by February. In the meantime, he’s made YouTube his pulpit, given congregants his WhatsApp number, held virtual meetings about kashrut and the burial society and is waiting patiently.

“I have never seen him angry or upset in all the years I’ve known him, and he deals with teenagers and other stressful situations all the time,” said Benjamin Hassan, an artist who is Mimran’s student at the Gibraltar kollel, an institute of advanced Jewish study that focuses on Talmud.

Mimran, 28, was born in Gateshead, a city in the Northeast U.K. that’s known for its yeshivas and flourishing haredi community.

The oldest of 16 children, he studied in those yeshivas, including the world-famous Gateshead Yeshiva, and at Mir Yeshiva in Jerusalem. At age 21, he married, and conceived a plan to complete his rabbinical studies at the kollel in Gibraltar. Gibraltar’s Jewish community of 750 people boasts Jewish day schools and four synagogues.

The kollel drew Mimran because he knew that even as a student, he would be given a lot of responsibility in such a small community: “I wanted to be able to do as much toward becoming a rabbi as I could.”

When he arrived in Gibraltar, one of the community’s leaders told Mimran that hopefully he would “get something done,” a directive he took to heart. In addition to his rabbinical studies, he helped manage the kollel; taught Jewish law and other topics; and made himself available to the community, including one Passover eve when he spent three hours in Hassan’s kitchen to avert a potential kashrut disaster, Hassan said.

At the beginning of his time in Gibraltar, Mimran also served as a chaplain in the town’s prison, where three Jewish brothers were in the middle of a seven-year sentence for financial crimes. He describes that work as a learning experience, not knowing when he started what he could say to the prisoners. He prepared a class for them, but ended up listening to them talk for 40 minutes.

“It was easier than I had thought to inspire people, even those in the most difficult of circumstances. You just have to be willing to hear them out and be there for them in their time of need,” he said.

After seven years in Gibraltar, Mimran was starting to think about his next steps when he saw a job listing for the rabbi position at Dor Tikvah in a publication from the Rabbinical Council of America (RCA). Dor Tikvah started as a prayer group meeting in family homes in the mid-2000s and was officially incorporated as a synagogue in 2012, said Jonathan Zucker, a founder of the congregation. It dedicated its sanctuary in August 2018 in a building that once housed a JCC, and has a membership of about 55 families.

Mimran liked what he learned from afar about Charleston. As different as the deep Southern city might seem from a stamp-sized British outpost on the Mediterranean, the two communities are both religiously diverse and tolerant of difference. They include a range of observance levels yet also boast a high degree of cooperation between different groups.

“He has the unique experience of living away from major metropolitan Jewish communities, which is a very relevant perspective for a rabbi who will serve in Charleston, South Carolina,” Zucker said.

When Mimran and his wife and three children visited in August, he liked the genteel city even more. People had told him how polite Southerners were, but he wasn’t impressed. British people are also famously well-mannered.

“But there was something more,” he said. “A warmth. British people are cold.”

In his final formal speech during his visit, as Shabbat was about to end, he laid out his vision for the community.