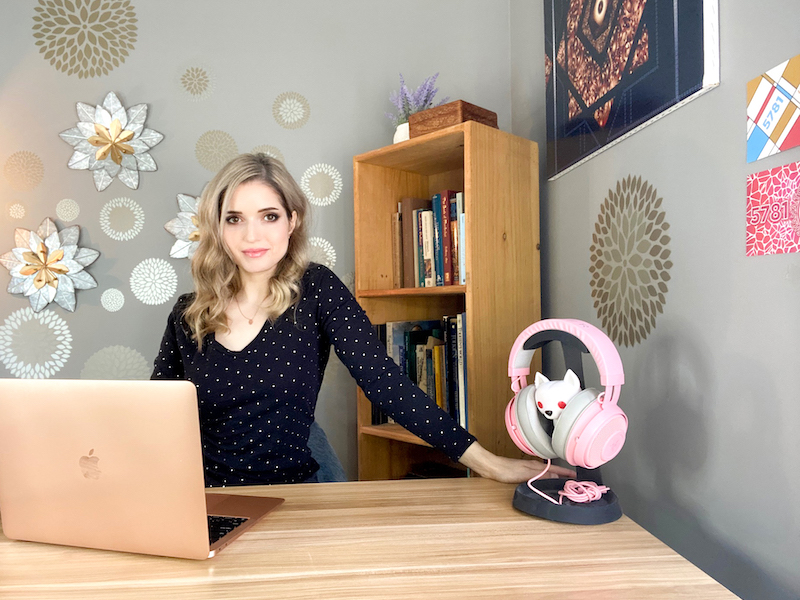 Miriam Anzovin has tens of thousands of followers across social media platforms.

Miriam Anzovin, a writer, visual artist and creator of the wildly popular “Daf Reactions” series on TikTok, says she exists “at the intersection of Sefaria and Sephora” — the online library of Jewish texts and the cosmetics company, respectively.

Anzovin uses her own authentic, informal millennial sensibility — grounded in her eclectic Jewish journey from being a self-described “formerly Orthodox person” to a secular atheist — to analyze pages of Talmud in viral social media videos. On July 18, Moishe House announced that Anzovin will be the organization’s first artist-in-residence, news that the “Jewish learning influencer” shared in a video post with her community of more than 17,000 followers on TikTok who devour and react to her 21st-century approach to Daf Yomi, the practice of learning a two-sided page of Talmud daily. She started that announcement video, as she does all her videos, with her now-classic opening line, “Shalom, friends.”

“I don’t call myself a teacher of Talmud, by any means,” Anzovin, 37, told eJewishPhilanthropy on Monday. “I react to what I’m learning and I share those reactions. I can teach people how to do what I do: discover an authentic personal reaction and pull that out as they’re going through the learning. But it requires a great deal more learning and experience and knowledge than I currently possess to say that I’m a teacher of Talmud…I am shocked to discover I inspire people to learn. I’m happy to have them along on this journey. It’s a part of my learning journey. But this response is a form of art.”

Moishe House started as an effort to create Jewish community for 20- and 30-somethings, providing spaces around the world — known as Moishe Houses — for young Jewish adults to create their own spaces of meaning for themselves and local peers through community and programming. Its network currently includes significantly more than 100 Moishe Houses across 27 countries.

While Moishe House’s international staff does have a cadre of Jewish educators on staff who bring text, wisdom and Jewish events to the young leaders of Moishe House, bringing Anzovin on board as artist-in-residence is part of Moishe House’s commitment to research and development, as well as their overall plan, founder and CEO David Cygielman said, “to bring Judaism to life.”

“This is a way of combining the arts with social media with young leaders, and so it’s an exploration,” Cygielman said. “We want to support her in creating more content because it serves the population we aim to serve, and we want her to influence and teach the Moishe House residents, staff [and] board what can be transmitted through social media that can lead to more Jewish learning content engagement.”

Any benchmarks that exist for Anzovin’s role are around getting more people to watch and engage with her content, Cygielman said. He called Anzovin “an amazingly talented young artist, who’s found a way to bring content in a way that hasn’t been brought to this number of people in this way before.”

“Sharing my learning and having all of you along for the ride has been the most meaningful and important Jewish experience of my life,” she said in her announcement video. “And I’ve had a lot of Jewish experiences.”

Brian Barasch, Moishe House’s vice president for global marketing and communications, told eJP that he sees Anzovin as a role model. “Miriam is helping to demonstrate to those in our community that this is a way to interact with text, and she is demonstrating that as a role model in this space, in a way that’s relatable to the people who are in our orbit,” he said.

Cygielman added that Moishe House aims to devote at least 5% of its $15 million budget to “trying different things,” which includes the artist-in-residence position. This funding is an allocation from the organization’s general operating budget, he said.

The arrangement is both formal and informal, with perks most creatives only dream about: Anzovin is not an employee, but receives a stipend and health care from the partnership, and she produces whatever she wants and owns any content she produces.

“The vast majority of Miriam’s work will be creating her content that she creates and owns and builds out because we know it’s reaching young adults, and we’ll reach more young adults, if she can focus on it, rather than having to do it in addition to a traditional nine to five,” Cygielman said, adding that “one of the hardest things for artists is being able to ensure that they have proper health and dental and vision insurance and are cared for in that way.”

Anzovin appreciates the support. “Just to hear someone say that they believe in what I’m doing and see the benefits and go so far as to decide to help, support and be a partner to me so I can focus on the expansion of [my work] had me choked up,” Anzovin said. “Even though I’m an artist, even though I’m a writer, I never in a million years thought I would be an artist-in-residence anywhere. And to have it come out of Daf Reactions, something that I love so deeply and [that] has sort of reformed my identity in a very significant way over the past few months, is so moving. It really makes me feel so hopeful for the work and for what we can do.”

Daf Reactions was born from Anzovin’s interest in the current cycle of Daf Yomi — a 7.5-year journey of daily Talmud study — which began in January of 2020. She embarked on the videos as a way of clearly and publicly identifying as a member of the Jewish community following a spate of antisemitic attacks in the preceding months in the New York area, she said.

“I needed to stand with my people,” she said, calling the work of Daf Yomi “a seven-year ‘f-you’ to the antisemites… Every single day for seven and a half years, I will learn a page of the Babylonian Talmud, I will be more invested in Jewish learning than ever. And this is my spite to them. And also it’s the joy and the oy, the oy with the joy in the learning itself.”

The work has also led her to engage with TikTok commenters who she refers to as “my online friends,” adding that she and they both get something from their online connection.

“This is a community and you can’t have a community if you don’t engage with them,” she said. “That’s what we’re doing together. Interacting with people online is absolutely a part of this work. It’s to give affirmation to people who have felt like they are not welcome to express their feelings and thoughts about Jewish learning,” and to provide a safe space for any “questions, confusion or internal conflict that they have about their Jewish identity.”

Teenage and young adult women are among Anzovin’s most frequent commenters. They send messages saying that no one had previously welcomed them to learn Talmud or speak about it in their own voices.

“Truly I could not ask for something more powerful in my entire life,” she said. “It’s an honor and a privilege to get to talk about Jewish ideas and my Jewish learning journey and have that somehow be inspirational and encouraging to other people.”

The Moishe House opportunity came at the perfect time for Anzovin, right after she had decided to leave her job as a content creator at Combined Jewish Philanthropies, Boston’s Jewish federation, after more than five years to pursue her online work. Her last day at CJP was also the day of her first conversation with Cygielman about this opportunity.

“There was no net to catch me,” Anzovin recalled. “But I knew I had to do it because this is the work that deserves full attention,” and balancing it with her Jewish communal work was difficult.

“It was a scary moment and then I had this conversation with David,” she said. “And from there, I felt such an immense sense of relief. As I’ve said, I’m an atheist. And yet, in my former life, I would have said, ‘This is hashgacha pratis, divine providence.’ This is such an incredibly-timed meeting of the minds. It was almost like a miracle that this happened. And I truly feel blessed.”