Lipstadt told eJP that she's glad to U.S. has rejoined the U.N. Human Rights Council: "If we are there sometimes [bad things] happen too, but at least we can try to fight them.” 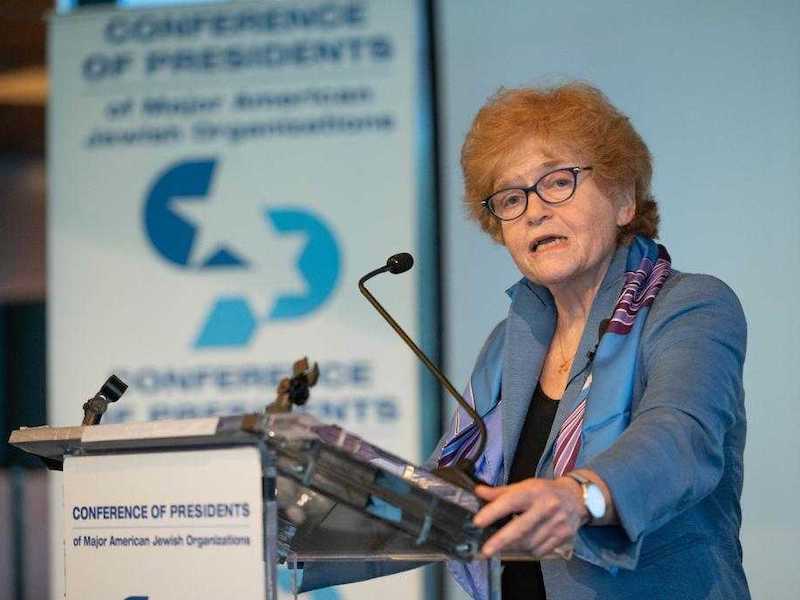 Deborah Lipstadt speaks at a gathering of the Conference of Presidents of Major American Jewish Organizations in New York City on May 26, 2022.

“You all know this. I’m bringing coals to Newcastle.”

Deborah Lipstadt, who didn’t include that Britishism in her prepared remarks, made the comment as a playful aside on Thursday to the dozens of attendees at a conference on antisemitism in New York City. The gathering, at the Museum of Jewish Heritage in Lower Manhattan, was hosted by the Conference of Presidents of Major American Jewish Organizations, and Lipstadt was discussing how anti-Zionism can serve as a mask for antisemitism.

The differing manifestations of antisemitism is a topic Lipstadt has discussed many times before, and would expound on again before the day was out. After the morning speech to the Conference of Presidents, Lipstadt headed to Arthur Ashe Stadium in Queens, where she was the keynote speaker at Yeshiva University’s commencement ceremonies.

The morning speech, she said, was her first in New York after having been ceremonially sworn in earlier in the week as the U.S. special envoy to monitor and combat antisemitism. Lipstadt, who grew up in New York and has lived for decades in Atlanta, faced a protracted confirmation process for her position. Now that it was all over, she was clearly happy to be in a space where she felt comfortable — throwing Yiddish into her speech and joking about getting lost in the State Department headquarters.

“I was looking at a very nice life in Atlanta, traveling, saying what I wanted to say,” she said, talking about how she decided to take the envoy position, and drawing laughter from the crowd. “I’m putting spontaneity in the rearview mirror. Many of you know me and know that’s hard to imagine.” Earlier, she joked, “I’m here to depress you.”

The bulk of Lipstadt’s remarks, if not depressing, were far from lighthearted. Judging from a few of her appearances since she was confirmed by the Senate in March, Lipstadt appears to have composed a stump speech repeating many of the points that she’s been advancing for years as a historian and analyst: that antisemitism is interconnected with other forms of hatred, that its associated conspiracy theories cross borders and that antisemites from left and right can agree on hating Jews despite disagreeing on everything else.

She hit on those points both while speaking to the Conference of Presidents and at the YU commencement, though she framed them differently in each case. Speaking to an array of Jewish communal leaders, she pitched her talk as a strategic framework for how Jewish organizations can respond to, if not end, bigotry against Jews.

At YU, she packaged her talk as a guide for how the graduates could fight against antisemitism as they venture out into the world. She told them to be careful not to say that all criticism of Israeli government policy is antisemitic — something she also spoke about at greater length that morning — and said they needed to be “equal opportunity” opponents of antisemitism.

“Too many people who fight antisemitism do so with a patch on their eye,” she told the graduates. “They see antisemitism very clearly but only see it coming from one direction, the political direction which they oppose.”

In her morning speech and a subsequent question-and-answer session with Conference of Presidents Chair Diane Lob, Lipstadt delved into a few topical issues, accusing Russian President Vladimir Putin of “ongoing, egregious Holocaust distortion and antisemitism” for his false accusations that Ukrainian President Volodymyr Zelensky, who is Jewish, is a Nazi, and for another Russian official’s false claim that Adolf Hitler was Jewish.

On other matters, she was a touch more forgiving, saying that many antisemitic statements are made out of ignorance rather than malice. Regarding claims made after the synagogue attack in Colleyville, Texas, saying that the incident wasn’t antisemitic, she said, “They didn’t do that out of malicious [intent]. It was a failure to understand what antisemitism is.”

“To simply assume that if we teach young people, or even not so young people, enough about the Holocaust, that we’re going to solve the problem of antisemitism… it’s not a magic bullet,” Lipstadt said.

As envoy, Lipstadt’s role is to monitor and oppose antisemitism outside of the United States, and, speaking to eJP after her morning address, she voiced concern about the United Nations Human Rights Council’s Commission of Inquiry into the 2021 Israel-Hamas conflict, given the council’s record of condemning Israel. But she said she was glad the U.S. had representation on the committee, from which former President Donald Trump had withdrawn in 2018.

“Any way we can work together, we’re happy to do so,” she said, regarding her office collaborating with the U.S. representative on the committee. “This happened while we weren’t there so, you know, facts on the ground. If we’re not there, bad things happen. If we are there sometimes they happen too, but at least we can try to fight them.”

She also told eJP that she believes the “great replacement” theory, the antisemitic conspiracy that motivated the gunman in the recent shooting in Buffalo, N.Y., has “gone more mainstream than it was five years ago,” when it was first brought to wide attention during the 2017 far-right rally in Charlottesville, Va.

She ended both speeches with the same anecdote, discussing the Talmud tractate and book of Psalms from her mother on which she was sworn in. She told both crowds that she insisted on saying “So help me God” at the end of her oath because, as she told the Conference of Presidents, she prays that she has “allies in the heavens above.”

She added, “God knows I need them, and I need you.”