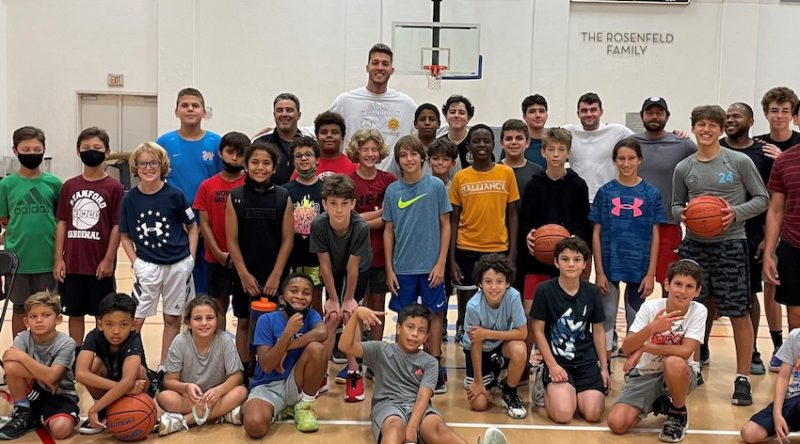 Paul Frishman, the CEO of the Miami Beach JCC, knew the local Jewish community would be hurt by Miami Heat player Meyers Leonard’s use of an antisemitic slur while playing a video game in March on a live-streaming platform. But he also hoped for healing, a hope that was realized in June when Leonard spent a week at the center as a basketball coach in one of its summer camps.

Frishman was especially concerned about the many JCC members and campers who were avid Heat fans. A 7-foot-1 center who was in the last year of his contract and had a shoulder injury, Leonard apologized the day after he used the slur, both to the team’s owners, the Arison family, and the Jewish community, which is the seventh-largest in the U.S. He was fined, suspended and traded a week later to the Oklahoma City Thunder, but the Thunder opted not to put him on the roster, raising the possibility that his nine-year NBA career was over. Yet in April, Leonard spoke about the episode at a Zoom event hosted by the University of Miami’s Hillel. Leonard’s apologies boded well, but Frishman and his team wanted more than an apology, he told eJewishPhilanthropy in an account of how Leonard came to spend a week at the JCC.

“I remember thinking that it was a terrible choice of words, and that the Jewish community would be hurt by this. He was on that video game format that is live-streamed. In today’s day and age, the spoken word gets out quickly. Right after it happened, there was a lot of discussion about it in the center, and a lot of hurt feelings. People were struggling to understand how someone could not be sensitive to such a blatant antisemitic slur, which is what Meyers Leonard said when he apologized, that he didn’t know what it meant.”

“At that point in the pandemic, we were open for business. We have a very strong athletics program here, and this was a topic that kids and parents were focused on. Sports are the vehicle through which we teach values. We have as many as 450 players of all ages who compete here in basketball — some casually, some on travel teams, some in the Maccabi Games [a global Jewish youth athletics competition]. There was a hope that we could create a better understanding, and a teachable moment.”

“We were planning a basketball camp for about 50 kids, and we had conversations internally that it would be an amazing opportunity for outreach. We thought that bringing him here would be wonderful for both him and for us, and we had a connection to the Miami Heat. One of the parents in that program, Steve Stowe, is a vice president with the team. Because of that, we had some access, and we knew that Meyers Leonard was hoping to connect with the community. He had already spent a lot of time with our South Florida community. He’d talked to rabbis and visited the Miami Beach Holocaust memorial. He spoke with [Holocaust] survivors. He’d been very remorseful and very emotional, and he’d said he wished he could go back in time and use different words.”

“Our idea was that we would ask Meyers Leonard to spend a week with us, and because we had Steve, we could reach out to him directly and invite him. The idea was that he would interact with the kids and work with our coaching staff. He would talk about the lessons he’d learned, but we also wanted him to know that we were hoping he would teach the kids basketball. He was there every day, spending time with the kids. He talked to them about life lessons, he shared his basketball knowledge with them. He coached them and he coached the staff, teaching them skills development. He signed autographs and gave the kids memorabilia. He was very generous with his time. He expressed sorrow and apologized for a mistake that he made in the Jewish community. He said that he hoped we could all accept his apology. The kids seemed to appreciate that even an NBA player of his stature could make a mistake, go through a healing process and come out better for it.”

“But really, all the kids wanted to talk about was basketball. There wasn’t even one question from them about the incident. It was all about different players, about skills. They asked how could they be a better basketball player. Kids are very forgiving.”